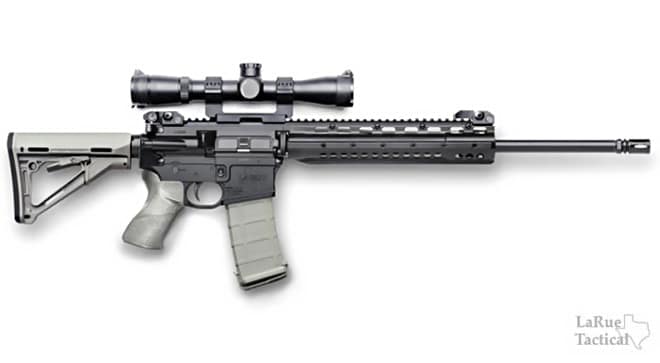 LaRue Tactical has issued a statement on their Facebook page describing their new policy, that they will limit what products are available to state and local law enforcement to what is legal to own for all other citizens. This is a direct response to many proposed state and local laws.

Due to the recent and numerous new Anti-gun/Anti-2nd Amendment laws passed and/or pending across our country, LaRue Tactical has been forced to reconsider how we provide products to state and local agencies.

Effective today, in an effort to see that no legal mistakes are made by LaRue Tactical and/or its employees, we will apply all current State and Local Laws (as applied to civilians) to state and local law enforcement / government agencies. In other words, LaRue Tactical will limit all sales to what law-abiding citizens residing in their districts can purchase or possess.

State and local laws have always been a serious focus of this firm, and we are now dovetailing that focus with the constitutional rights of the residents covered in their different areas by the old and new regulations.

We realize this effort will have an impact on this firm’s sales – and have decided the lost sales are less danger to this firm than potential lawsuits from erroneous shipments generated by something as simple as human error.

Thanks in advance for your understanding.

* * This policy does not apply to Military / Federal Agencies * *

While we can see how this is a way to protect themselves legally, LaRue’s policy sends another subtle message. If you endorse, vote for and pass increased gun control laws, we’re not going to play nice with your protectors. It’s a risky position, but one that has worked well for other companies, like Barrett.

Another reason we believe their core message is that they will withdraw support for law enforcement for political reasons is that the risk of lawsuits is nebulous at best.

And realistically speaking, the sales lost to law enforcement pale in comparison to the massive amount of business they stand to lose should things like detachable magazines and pistols grips be banned.

It would be interesting to see if other companies follow suit. With the consumer market as big as it is today, and even prior to the gun buying panic, companies know which side of their bread is buttered.

Other companies, like Ruger, have started acting politically as well, though in less drastic measure. Ruger recently called all their customers and gun owners to speak out and contact their representatives.

One thing’s for sure: this is likely to win LaRue Tactical quite a few new friends. With this statement they are showing a kind of favor to the individual that many gun companies aren’t or won’t. Sure, they’re going to continue to serve the military and other federal agencies; who’s going to argue against helping the troops?

Would you like to see more companies take this position?