Non Semi-Auto Survival Rifles: What are your options?

With all of the current and pending legislation and the total lack of anything in the way of semi-auto rifles on the shelves, I have been asked by quite a few people what to get in the way of a survival rifle. The definition of a survival rifle varies with who you ask, but I would define it as the rifle you would feel comfortable grabbing in any situation.

From defending your family to feeding your family, from long distance accuracy to fast rate of fire and reloading, this is, no questions ask, the rifle up for the job. There are still many great choices out there now that semi auto rifles are getting as rare as Model T Fords on the moon.

Recently I ran across a surplus specimen that has a lot of potential — a sporterized Model 93 Spanish Mauser in its original 7 x 57mm. The barrel had been cut very professionally down to about 21 inches and it had the original military rear sight and a nice blade front.  The stock had also been cut down some time ago by someone who knew what they were doing.

Everything worked, the bore was excellent and the shop owner only wanted $100 for it. Now before one goes on about how the rate of fire and reloading a bolt action rifle, I urge you to check out how quickly someone can load a military rifle with stripper clips with some experience. I know people who can load up a bolt action with stripper clips faster than a rifle with a detachable magazine. While the rate of fire is slower with a bolt, you can still get some rounds downrange in a hurry and if you pick your shots, you won’t need many. 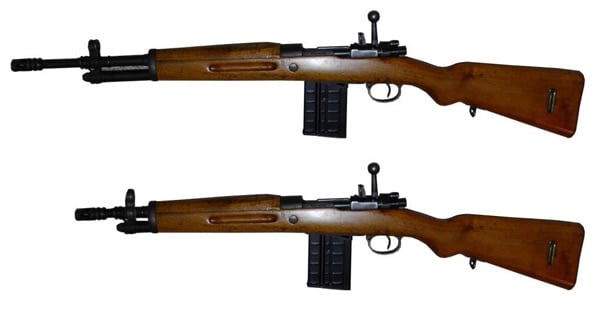 If you don’t want to cut up a nice military rifle or want to find a sporterized gun to meet your needs, I suggest you look at another Spaniard, the Spanish FR-8. The FR-8 was a Mauser 1943 that was converted to a short rifle as a stop gap until they could get a new battle rifle. The barrel was cut down to 18 ½ inches and given a muzzle brake and some very nice rear sights.  This open sight features three rotating peep sights for three different ranges and are possibly some of the best sights found on any military surplus rifle.

The FR-8 was also converted from the 8mm Mauser to 7.62 x 51 NATO. There has been some controversy over loading up .308 Winchester in these guns, and one has to take into account that these guns were converted from another caliber, and some even say that even though they were in 7.62 x 51 they never used that ammunition when employed.  I say, since these guns were in service from 1965 to 1980, there is no doubt that they fired 7.62 x 51 NATO at some time. These guns can be found very cheaply, often for less than $400, they take stripper clips.

Alright — a bolt action rifle is not your thing. Then I would certainly look into a Remington Model 760 or 7600 pump rifle or carbine. These guns are some of the toughest out there and in the right hands they are certainly do-it-all rifles.

A friend of mine has been relying on his 760 for whitetails ever since he returned from the Vietnam War in 1970. He uses a carbine version with its 18 ½ inch barrel in .30-06 as opposed to the standard 22 inch barrel. He added a receiver sight many years ago and every year that gun has accounted for plenty of meat in the freezer and more than one coyote. With the detachable magazine and a few spares the gun can be fired and reloaded quite quickly, and in calibers like .30-06, .308 and .243 there are more others it can be used for everything from small to large game and all points in between.

I think the most obvious choice in the non semi-automatic survival rifle category has to be a good lever action rifle.  These guns have always been popular do-it-all rifles for the simple reasons that they just work and it is not uncommon to find a hunter using the same .30-30 Winchester or Marlin that has been in the family for decades.

My grandfather had a Winchester saddle ring carbine that he bought used in 1929 and retired it finally in 1994. He killed grouse, rabbits, squirrels, bear and more deer than most people see in their lifetime with that same little gun. When I last saw it, the fore end was worn down and the blued finish was all but gone.

Yet the action still worked and if it were taken out today it will still take a deer—a testament to how well Winchester built their rifles in those days. I recently ran across a Marlin 1936 in nearly the same condition, the metal finish was gone but the gun was perfectly functional with an excellent bore. In the right hands such a gun could feed and protect a family, no question. Ammunition in .30-30 is readily available and was one of the few rifle calibers I’ve seen on the store shelves recently.

Levers can do a lot more than most shooters give them credit for and that includes being easy to reload. While reloading the tube magazine of a lever can be slow, putting those rounds downrange can be done quickly and accurately as the guns firing them are light and the recoil is mild. If the .30-30 is not your thing, then you can find lever action rifles in pistol cartridges like .357, .44 Magnum and .45 Colt but these guns are quickly drying up and can be very expensive compared to a second hand .30-30 rifle. Don’t overlook the .35 Remington and to some extent the .32 Special although ammunition is not always available as good old .30-30.

Adapting to a hostile world

There are certainly other rifles out there that will do just as well. I am caretaking a perfect example that belongs to a friend, an early pre-’64 Winchester Model 70 Featherweight in .308 Winchester with a receiver sight mounted instead of a scope.

Such a gun would be ideal for short range hunting and personal defense with its quick action and sights will put it back on target faster than a scope.

There are many thousands of guns just like it all over the place in many different calibers and it’s with those that we must face a new reality right now — the supply of semi auto rifles and handguns has dried up and it may be awhile before it gets back to normal. For some of us it might be permanent, a couple of states work feverishly to ban anything they see as a threat to public safety.

New York has left gun owners without any means to buy any new firearms that take over seven rounds with any detachable magazine. Connecticut and Massachusetts may soon follow, along with Illinois and California if they get the notion. What guns have not been banned are on backorder and won’t be available in stores for quite some time. Many of us on limited budgets could not have bought AR-15 style rifles even if we wanted to, and many gun owners have been in the same boat. We would have liked to have bought something, but bills are more pressing.

The rifle you find in your hand when the SHTF might not be a semi auto, but that doesn’t mean it can’t get the job done. The truth of the matter is that there are many great guns out there that have been ignored for so long, it’s perhaps a silver lining that their time has come to collect their due once more. We might not have planned for the times at hand, but we have to adapt to them as best we can, and that means thinking outside of the box (or box magazine).