After fielding complaints from a Muslim civil liberties organization, a Michigan gun store will no longer be selling targets of a bearded skeleton, clad in a turban, holding an AK-47.

Last week, the executive director of the Michigan chapter of the Council on American-Islamic Relations (CAIR), Dawud Walid, confronted the owner of Targets Sports, Ray Jihad, about the controversial target.

“I decided to pay the shop a visit and I saw the target on a wall and purchased two copies,” Walid told the Macomb Daily.

After introducing himself to Jihad, Walid explained how the target – known as ‘Crazy Bones’ – might encourage violence against the Muslim community. 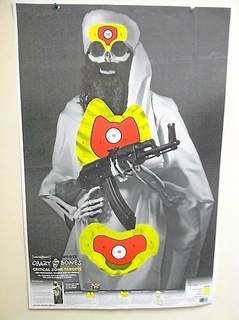 “I expressed my concerns that it’s not just offensive but a person who shoots at a target like that might see a Muslim and look at that person as a hostile enemy,” Walid said. “He promised to stop selling them. It was that simple.”

Walid characterized the discussion as “extremely non-hostile” and, later on, praised the owner’s decision in a CAIR newsletter.

“We welcome the decision of Target Sports to discontinue selling such targets, which could have the effect of perpetuating misconceptions that Muslims, in particular those wearing certain attire, are to be viewed as a threat that should be eliminated,” Walid wrote.

“What he did is great, great news,” Akeel told the Macomb Daily. “That’s an expression of social responsibility. It’s the prudent thing to do. He recognized those targets perpetuate hate and could create a divide.”

“While we are having this national gun debate why put more gasoline on the fire by selling something that makes a group a target for shooting,” Akeel added.

Walid also contacted the Ohio-based company – Thompson Targets – that makes ‘Crazy Bones’ to ask the owners if they would stop making and distributing the target.

“I had a spirited conversation with a family member of the owner,” Walid said.

“He told me we’re at war and we were trying to kill Osama bin Laden,” he continued.  “I told him there are people here who may dress that way and they aren’t like Osama bin Laden. I hope I can convince them to stop. God knows how many other gun shops carry it.”

Walid said that after the conversation, Thompson Targets took ‘Crazy Bones’ off their website, which according to Walid is an acknowledgement that the product is controversial.

However, a quick search shows that one can still purchase the target on the company’s website.

In looking at ‘Crazy Bones,’ it does bear a resemblance to the now deceased Osama bin Laden.

Now, with that said, it’s quite clear that the Muslim community finds the target to be offensive.  Consequently, I would not purchase the target and I would encourage others to buy zombie targets or clown targets or some other socially/politically  innocuous target instead.

For retailers the decent thing to do and arguably the right thing to do is to follow Mr. Jihad’s lead and to stop selling them altogether.

Though realistically speaking, and as we saw with the Trayvon Martin targets, which were in my opinion tasteless and grossly offensive, people will find a way to sell something if there’s a demand for it.  So, again, it circles back to the purchasing power and preferences of gun owners.

If gun owners stop buying them, then manufacturers will stop making them and retailers will stop selling them.

Knowing this, here’s the question of the day, would you purchase ‘Crazy Bones’ knowing that the Muslim community finds it offensive?