MSAR in the AR Magazine Business, from Standard Capacity to N.Y.-Compliant 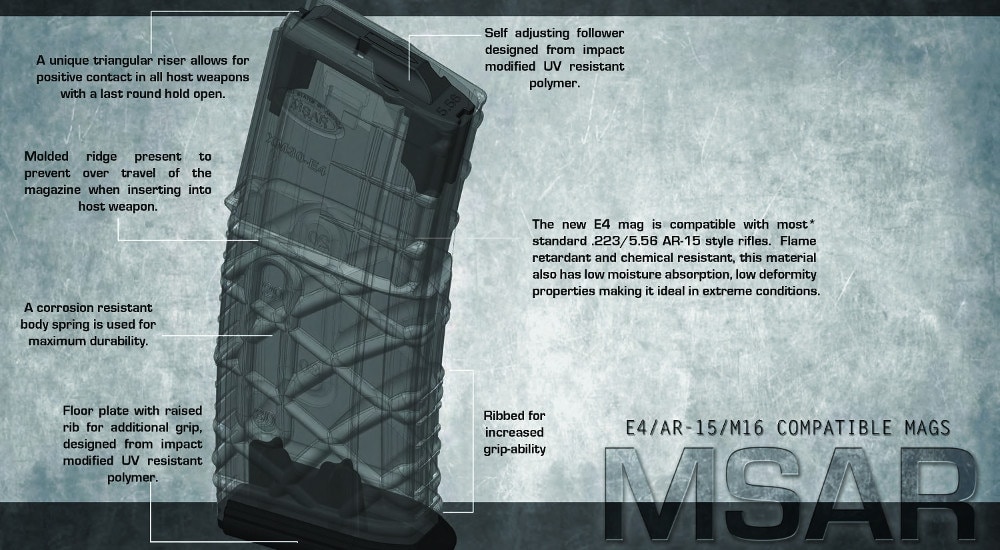 Microtech Small Arms Research, who is better known for their STG-E4 Steyr AUG-derivative bullpups, is now manufacturing magazines for their rifles and AR-15s everywhere. And they really mean everywhere, as they are one of, if not the first company making New York-compliant seven-round magazines.

Called E4 magazines, these STANAG-type magazines work with their AUG-based bullpups, too.

Their magazines are an original design, polymer mags with a swept waffle pattern, a unique self-adjusting follower and an over-insertion stop to prevent damage incurred by slamming them in hard. The front and back sides of the magazine are ridged to provide a better grip, too.

The floorplate is enlarged to make it easy to pull out of magazine carriers, specifically retention-based carriers. It’s also rubberized and impact-resistant.

The rear of the magazine works with standard stripper clip adapters and is relieved to work with a wide range of bolt catch designs, not limited to just the types used in ARs and STG rifles. It is officially compatible with the Heckler & Koch HK416. Combined with a specially-shaped follower bolt catch notch, these magazines promise to work with bolt catches of all types. 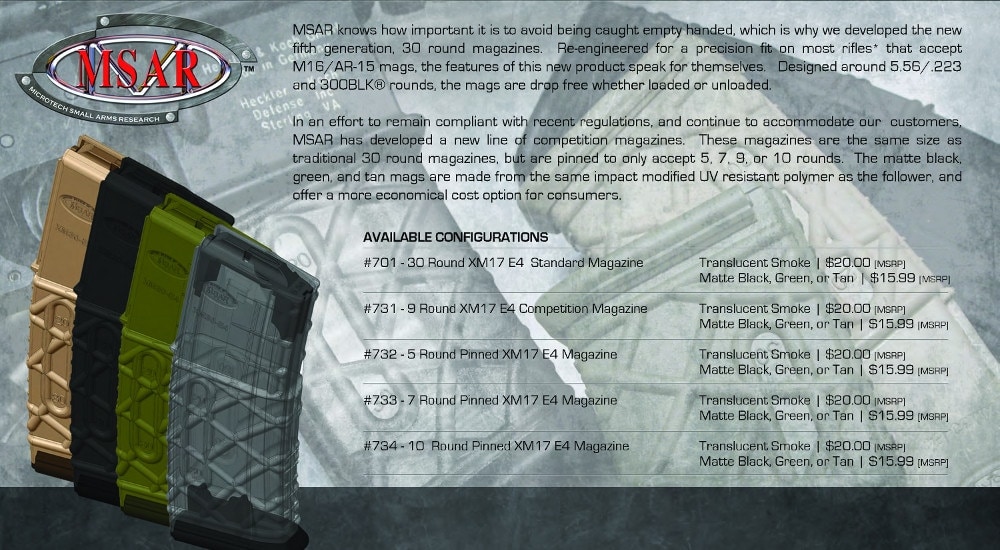 MSAR will be launching their E4 magazines in five models, standard 30-round mags as well as 10-, nine-, seven- and five-round magazines. All the reduced-capacity models are based on the standard magazines and are pinned to limit the round count.

MSAR is a small company and in the past, hit a few bumps in the road. But their current bullpups are featured and solid, and we expect the same from their magazines. MSAR lists their MSRP at $20. If they’re priced anywhere near $20 by vendors they’ll move fast.

It’s not likely that MSAR will roust other polymer magazine manufacturers from the top echelons of the gun world, but we have no doubt that their magazines will sell as quickly as they can bring them to market, at just about any price. The shooting world will know very quickly if and how well-made these E4 mags are.