Toy Guns in the Wake of Sandy Hook

I was talking to a friend of mine last week about guns. She has three boys and they have lots of plastic guns.  But in the wake of Sandy Hook, she’s nervous.  War toys were pretty common in her house.  She’s picking them up, she says.  She’s phasing them out.  Cap guns.  Nerf guns.  Toy rifles, pistols, water guns, blasters.  Anything that even remotely resembles a war toy is getting bagged up and stashed away in the basement.

And her boys seem a bit confused.  While I’m not saying that her decision to take away the guns is right, or wrong, she’s making guns taboo.  And I know all too well from my own childhood that this decision can make them even more attractive.  I wasn’t allowed to have a BB gun when I wanted one.  And look at me now.

There are several issues connected with toy guns.  Some feel that toy guns teach kids to use real guns.  Depending on your perspective about real guns, this could be good or bad.

A close copy of an AK.

Toy guns, or some of them, closely resemble real guns.  As such, some real criminals have used them while committing real crimes.  And this resemblance to the real guns has even confused some law enforcement officers who have responded to perceived threats with lethal force.

This sometimes happens to criminals and we rarely mourn, but when it happens to kids, as it did in West Memphis, Arkansas in 2007, we all cringe.

But these problems have been addressed with legislation that attempts to make toy guns easily identifiable as toys.  We’re all familiar with the red end-caps on barrels that are ubiquitous within the industry now.  We like to think we’ve fixed this problem.

But there are more complicated issues

Toy guns are perceived to encourage violent role-playing.  I have a five year old son.  He’s at that age where he likes physical play.  Any straight stick he comes across becomes a sword.  If the stick has a Y, it is a gun.  He enjoys playing with slingshots and bows and arrows just as uch as he does riding his bike.  Yet he’s not yet asked for a toy gun, and he has no obvious attraction to real guns.

Most of his gun play is associated with his desire to be a police officer.  When I was his age, I wanted to be an Indian.  Not a Native American, a cliche cinematic headdress wearing Indian.  I preferred my bow and arrow.  But when my family camped out at Fort Wilderness at Disney World, I picked up a Davy Crockett musket that became the center piece of my early collection.

It all seems very natural to me.  Violence is an inherent part of our American culture.  While we still embrace ludicrously puritanical attitudes toward expressions of sexuality, we are saturated with violence.

I’m making a distinction here.  Guns are different from violence.  While there is a clear corollary between the two, they are not synonymous.

How has the toy industry fared since Sandy Hook?

Politicians can squabble over proposed legislation forever.  Parents (some of them, at least) can act with more impunity.  And many have.  Toy guns are reportedly being taken out of circulation in homes across the country.

David Mielach, at Business News Daily, reported earlier this week on the issues facing toy gun makers and sellers.  “Manufacturers who specialize in realistic-looking toy weapons have experienced a small backlash,” he writes. “Other companies … creating more toy-like alternatives to realistic looking guns have seen an uptick in recent months. ”

His research was conducted at Toy Fair, a giant industry convention in New York.  There, Mielach interviewed Beaver Raymond, co-founder of the Marshmallow Fun Company.  “I have heard that toy guns that look like real weapons have slowed down in general, but toy weapons that are whimsical, fun and colorful, those have not been affected.”

That’s a good thing for fans of the Mazooka, and any of the other MFC’s marshmallow shooting blasters, bows, and slingshots.  Others, companies that make guns that look more like conventional “assault weapons” may be finding it harder to ensure sales.

Mielach quotes Joe Rooper, president and CEO of Hog Wild Toys.”We do like stuff that shoots, but we don’t want it to look realistic.  Our competition makes real-looking guns, and we intentionally do the opposite to make our products look more like a toy so we don’t get that backlash.”

But does backlash equate to a decline in sales?  Nothing in Mielach’s findings documents an actual decline in sales.  It seems to be mostly hearsay.  Though it is still early.

It varies wildly.  Older kids are playing with Airsoft guns that are stunning recreations of actual firearms, but this part of the style of Airsoft guns.  But smaller children have options that range from wildly exaggerated guns, to realistic replicas, to whimsical and imaginative guns.

As we’re seeing with the debate surrounding modern sporting rifles, anything perceived as scary will get attention.  Websites like Kids-Army.com, if Mielach’s findings are right, are more likely to find customers retreating.  Kids-Army.com sells a wide ranging variety of toy guns, and all of the accompanying camouflaged extras.  It is a site devoted to kids who like to play army, as you might have surmised from the name. 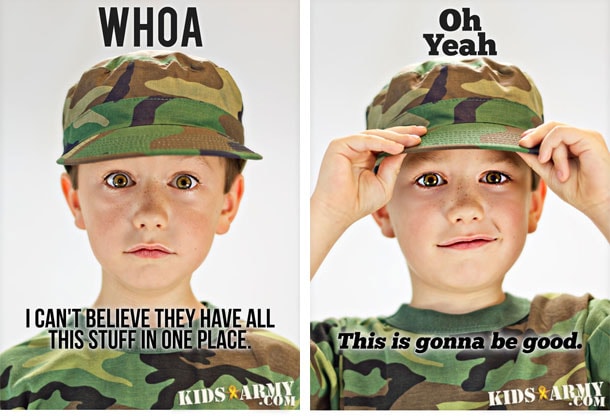 I spoke with Jeff Reider at Kids-Army.  He’s read the recent reports of an industry downturn, one that would hit Kids-Army hard, but he has no complaints.  Reider says they’ve seen “a decline in the first quarter sales, but that’s typical after the holiday season.”  Kids-Army’s holiday sales were typical, and their growth has remained consistent.

I asked Reider if he’d experienced any of the reported backlash.  He said they’ve “received some emails” from parents concerned about the sale of toy guns to children.  But, again, this is typical.  Business as usual.

So the results seem to be mixed.  Toy guns and war toys have always drawn some scrutiny from concerned parents.  They will likely to continue to draw scrutiny.  Children, especially boys in our culture, will continue to play with toy guns, even if they have to make them themselves out of bent sticks.

I wish I had the answer.