“The level of support from Cheaper Than Dirt both delighted and shocked me,” said Second Amendment Foundation director Ray Carter. “SAF has never before received a single donation of this size and by itself Cheaper Than Dirt’s contribution will make possible a major expansion of SAF legal action and education efforts. We are privileged to consider Cheaper Than Dirt a partner in our efforts.”

“Created in response to the generous donation from Cheaper Than Dirt, the Diamond level of sponsorship indicates the highest level of support for SAF’s continued efforts to restore firearms rights ‘one lawsuit at a time,’ as SAF founder Alan Gottlieb explains it.” 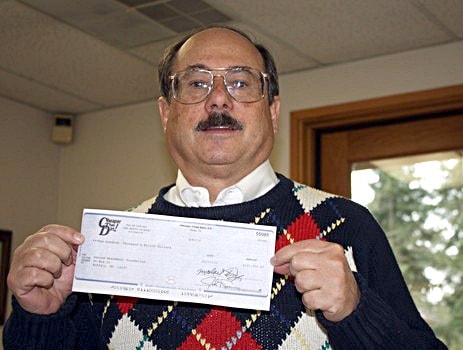 The founder of the Second Amendment Foundation Alan Gottlieb holds up a check with a lot of zeros on it.

This will come as a surprise to many people who hold Cheaper Than Dirt in another light. Those who see the company as capitalizing on the recent nation-wide gun-buying spree by inflating prices many times over what their pre-panic levels were.

Following the shooting at Sandy Hook, the company announced a temporary suspension of online firearm sales as they reviewed their policies.  Later, Cheaper Than Dirt released a statement that their ordering process was overwhelmed by the number of purchases people were making and that they needed to re-vamp their systems.

Still, the damage was done and Cheaper Than Dirt will have to work hard to un-tarnish their reputation. Clearly they’ve found a higher purpose for their panic-driven gains. This donation will mend a few fences for sure.

And if you go to their website, while their prices are still high, they’re in-line with a few other vendors’ rates, at least, of those with product in-stock. They’re up there, but they’re come down a bit since their initial price hike. Maybe they plan on converting their current rates into future donations to gun rights organizations.

The Second Amendment Foundation is most famous for McDonald v. Chicago, the case that established that firearms ownership is a fundamental individual right of all people.

With this sudden burst of generosity, Cheaper Than Dirt stands to win back some customers, at least those who don’t mind spending a bit more.

Will you do business with Cheaper Than Dirt following this announcement?