I’m not one to ramble on about abuses of freedom.  It isn’t really my style.  But every now and then something comes up that I feel needs a wider audience.  And the controversy surrounding 3D printed gun parts has brought up some big issues for me this week.

In 3D Printing to End Gun Control, Guns.com writer S.H. Blannelberry looked at new uses for an emerging manufacturing technology.  3D printers, which are becoming more affordable, smaller, and more efficient, are used to print just about everything imaginable.  Even gun parts. 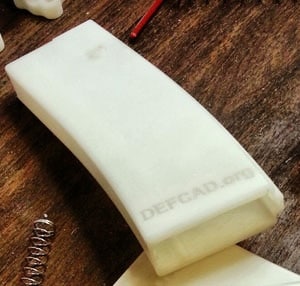 The fear, obviously, is that printed guns will get in the wrong hands.  But Blannelberry concluded his August article with this statement.  “3D printing or no 3D printing, the wrong people already have guns or unfettered access to guns.  The real danger, and what I worry about, is that through gun control legislation the right people may lose the best means they have at protecting themselves.”

That was last August.  “Gun control” was more of a hypothetical what-if.

Six months later, the debate is being legislated.  The 3D printing that seemed like an expensive novelty (or at best a proof-of-concept) may now be an integral means of preserving the AR-15.

This is the start of something huge.  Forgive my sense of hyperbole.  I don’t think I can exaggerate this enough.  The AR platform, at age 50, is going the way of the AK 47.  What once was a rifle built and regulated by the postwar industrial machine, will now be built, modified, and kept alive by individuals.  And there’s little the legislators can do about.

The AK 47, and all of the Kalashnkiov inspired permutations, began as an industrial tool of war.  But the Soviets gave up control of manufacturing long ago.  Outsourced rifles were built in countless countries.  Some were constructed in staggering quantities by massive factories. Others were built by small machine shops.

But across the Middle East, the AKs are maintained by back room gunsmiths and armorers with hand tools.  It is not uncommon for American troops to confiscate rifles that have been kept in continual service for 50 years. 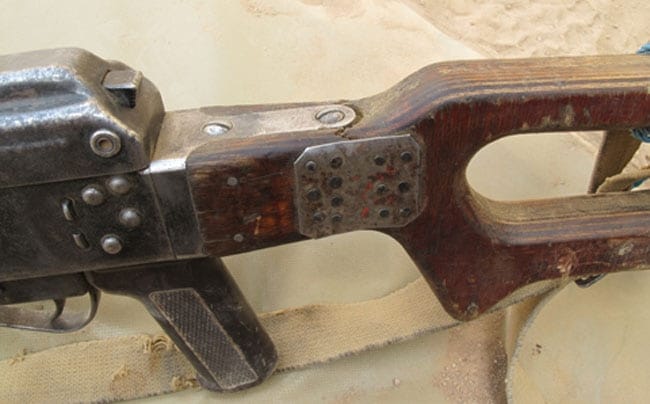 C.J. Chivers writes about this in his book The Gun, and in a New York Times article titled What’s Inside a Taliban Gun Locker?  The two pictures above are from that article.

But we, and I’m mostly referring in broad terms to American males between the ages of 15 and 50, don’t use files and sheet metal stamping mills (gunsmiths excluded) nearly as well as we use the Internet.  While we have the antiquated technology to build anything we want, we typically don’t (the AK built from a shovel, being the obvious exception).

Take magazines for example.  We could fold, rivet, weld, temper, etc.  But we won’t.  But when a magazine is available as a download, and the click of a mouse, we will.  The technology speaks to us in terms we understand.

Not that they won’t try to ban this, too

It is completely legal to make a firearm for your personal use, so long as the end product doesn’t violate any other existing laws (like having a short barrel on a shotgun, or rifle).  It may make some people nervous, though.  But homemade guns have never been on par with “assault rifles,” at least not for 150 years or so.

As states like Colorado try to make manufacturing some magazines illegal, than legality must be a concern. But regulation is going to be complicated, if not impossible, when people begin printing magazines at home.

But it goes beyond legislation.  After Sandy Hook, many people and corporate entities are distancing themselves from guns. There is the proposed sale of Freedom Group. Even firearms retailers pulled back from controversial guns.

Even Ebay is getting (more) skittish.  They’re paranoid about the mention of “Assault Weapons” in any description.  You can still sell a part that might fit more than one gun, but not if you mention assault weapons, or any of those taboo guns associated with assaults.  Their policy page now reads: “Accessories that fit a variety of different weapons, including assault weapons [can be posted]. But in your listing, you can’t mention any assault weapon compatibility.”

And Thingiverse, the online repository of printable projects associated with MakerBot printers, recently pulled the plans for an AR-15 lower, citing a violation of their service terms (you’re not allowed to store files that can be used to make weapons).

This has to be an expected setback for HaveBlue (aka Michael Guslick), the designer that posted the AR-15 plans.  Similar things are happening to others.  Cody Wilson and the team at Defense Distributed, for example, now seem to be spearheading the printed firearms movement.  They have an SLA Printed 30 round AR magazine.  The only thing that isn’t printed is the mainspring. 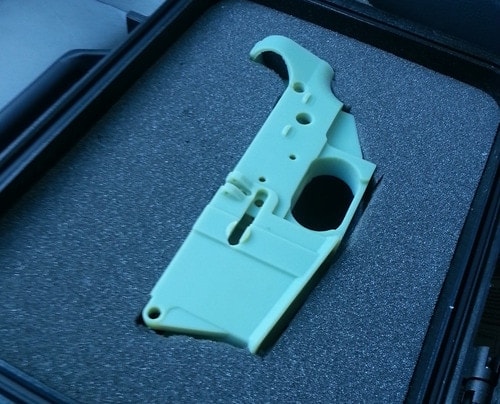 Cody Wilson actually had a printer he’d leased reclaimed by the manufacturer when they found out his intentions.  But it didn’t stop him.

“It is a symbol,” Wilson says about his printed magazine in an interview with Alex Jones of Infowars.com.  And I agree.  “They can try to go back to 94, and ban these things.  But there’s new methods of manufacturing and the Internet will preserve that file forever.”

That’s the important part.  The preservation.  Even Youtube is guilty of some dubious decision making regarding 3D printing of gun parts.  They pulled the videos of the printed magazine, then (rightly) put them back up.

“They’ve walked back into a wall and they didn’t know it.” Wilson says.  The “they” he is referring to may not be so easy to define.  The inventors of 3D printing technology can’t control what it makes.  Retailers and corporations are being forced to choose sides in this debate, or walk a tightrope between them.

But for the rest of us, these 3D printed proofs-of-concepts are just the beginning.  But the time to act is now.  You’re reading this on a computer that is capable of storing the files needed to print gun parts.  And your machine is capable of passing them on.