Guns of the Railroad Bulls

Railway Bulls, a term for railroad police popularized by hobos and bindle stiffs riding the rails during the Great Depression, have always had their own flavor in firearms preferences and needs. From the 1840s through today the arms they have carried have reflected the needs of their times.

The Golden Age of railway police 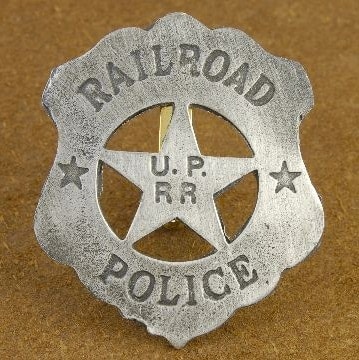 The original railway bulls were private detectives hired typically from the agency of Allan Pinkerton. Pinkertons, dressed in city suits, armed with revolvers usually of their personal arsenal, and empowered to enforce their own brand of justice in defending the railway and its interests, were a force to be reckoned within the latter part of the 19th century in more ways than one.

As an example of how varied the armament of Old West era railway police could be, one need look no further than the Roscoe gunfight in 1874.

In said gunfight Pinkerton railway detectives Louis Lull and John Boyle in the small Missouri town of Roscoe bumped into the Younger gang. It’s not recorded what Boyle brought to the table but it is known that Lull open carried an English-made .43-caliber Trantor with a 5 7/8 inch barrel and a concealed No. 2 Smith & Wesson revolver into the fight. When the smoke cleared, both train robber John Younger and Pinkerton Agent Louis Lull were dead.

Some railroads took the next logical step and formed their own private police agencies rather than hire Pinkertons for their heavy lifting. In 1878 the Santa Fe Railroad was butting heads with the rival Denver Rio Grande Railroad and formed its own police force with 100 hired guns headed by a local town marshal who became the railroad’s first chief of police.  You may remember this lawman now by the name of Bat Masterson.

The popular arms of the day with lawmen from St. Louis to San Fransciso included cap and ball military surplus Colt and Remington revolvers along with Henry and Spencer carbines just after the Civil War. These gave way to more modern Winchester Lever Guns and Colt Revolvers after the 1870s.

The war on the hobos 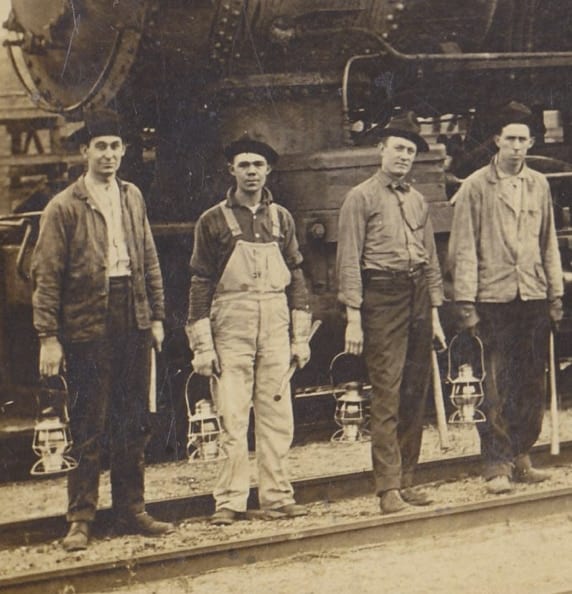 By the 1930s, the era of the great train robberies was over but the war on the hobos had just started. For a decade, as much as 25 percent of the country was unemployed and great waves of homeless young men made for the rails looking for work coast to coast. This decade saw an increase in the ranks of one of the few paying jobs available — railroad bulls. With railwaymen on each side of a line of cars, the bulls would methodically check inside every freight car for free-riding ticketless passengers.

Usually armed with a lantern in one hand and a club in the other, they also carried pistols and revolvers as on occasion the freeloaders would be armed and sometimes eager to resist. When rail yards became too heavily policed to slip onto sidelined trains, hobos took to hopping moving trains along the rails.

Marines on the rails

Twice during the 1920s, when mail robberies became an epidemic, United States Marines were detailed to ride the rails backing up the bulls. Over 2,000 leathernecks were detailed coast to coast to ride shotgun (literally) in mail cars with their primary arm being Winchester 97 trench guns with Colt M1911s in Condition One (cocked and locked.)

To make a speedy tactical draw, the dustflap on their standard holsters were tied open, exposing the grip of the Colt to the Marine’s ready hand. Individual postal service employees themselves were loaned WWI-era Smith and Wesson 1917 .45 ACP revolvers as a last line of defense. Once implemented, robberies of mail cars on trains in the United States took a marked decline. 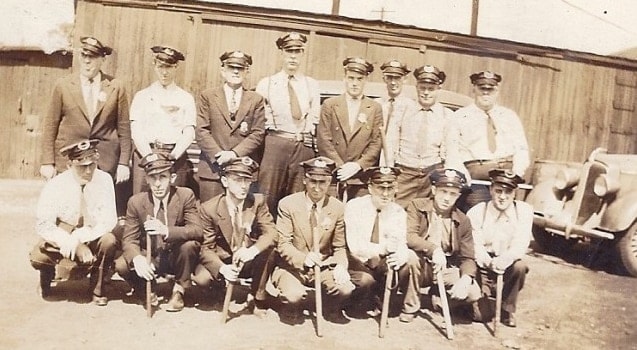 By the 1940s, the organized railway police across the country numbered more than 7,000 officers protecting no less than 240,000 miles of tracks.

During both World Wars, railway police guarded bridges and tunnels from saboteurs and protected vital infrastructure. In both instances, surplus military firearms, including Krag rifles in 1917-18 then from 1941-45 Winchester 1897 trench shotguns and Enfield M1917 rifles, were loaned from Army stores.

Bulls furthermore found themselves hard pressed in helping the Army look after the transport of more than 425,000 German and Italian prisoners of war that were transported to 511 camps around the country by rail during WWII.

Over this same period, much of the individuality of the old railroad bulls went away. Many departments left the Pinkerton model of young men in suits carrying their personal firearms and adopted badges, uniforms and issued standardized firearms up and down the rail.

With the huge number of railway police departments coast to coast from the 1880s to the 1980s, almost every popular model of handgun, shotgun or lever-action rifle has been issued at one time or another.

Company owned weapons were marked either on the butt or the frame, or quite often both. There is a definite market for these guns with railroad memorabilia collectors and police firearms collectors, which gives these firearms a premium of a little more than their actual book value. The fact that many of these arms were stored in safes at offices, or on racks inside mail cars for decades at a time without being used means they often are low-mileage pieces in pretty good condition.

Many railroad police forces were notoriously slow to modernize their firearms. For example, Conrail in Pennsylvania still issued its officers .38-caliber 1905 model Colt Police Special revolvers (with six-inch barrels!) as late as the 1990s. The phrase ‘often carried, but seldom shot’ comes to mind.

Today more than a thousand railway police still carry a badge and a gun on the rails. 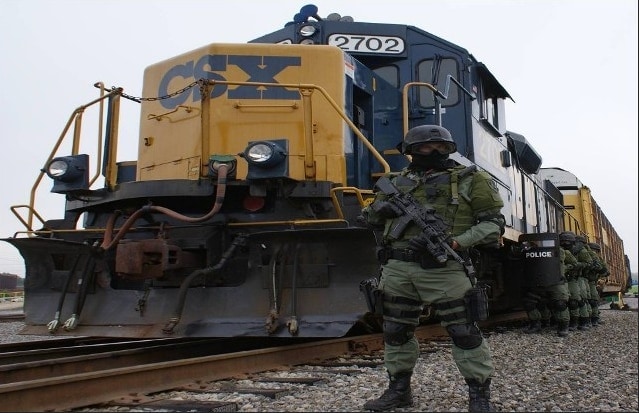 Private rail lines CSXT, BNSF, KCS, UP, and others still maintain their own accredited police departments as does Amtrak, who is in charge of the federal government owned passenger train system. Of these, the Amtrak Police is the largest with more than 450 sworn officers who undergo training at FLETC alongside other federal officers.

They are armed with Glock 22 .40-caliber pistols and no less than 100 5.56mm Bushmaster Patrolman’s carbines with which they qualify regularly.

Some question the need for armed railway police. The Union Pacific Special Agent’s Office in Avondale, Louisiana, has a memorial wall for no less than 181 railroad police from several agencies killed in the line of duty since 1878.