Ruger likes to make people happy. In what has to be one of their most-requested additions, they are now making an LCR in .22 Winchester Magnum Rimfire. This follows the addition of a couple of .22 Long Rifle models to the LCR family about a year ago.

The .22 Magnum LCR has six chambers, down from eight in .22 LR but up from five in .38 or .357. It’s in the middle of the pack for weight at 16.6 ounces, and has the same 1.875-inch barrel as the others. Like most of Ruger’s LCRs, the new revolver has a Hogue grip and a pinned ramp front sight, with a channeled frame for a rear sight.

If other short-barreled revolvers are indicators, .22 Magnum—depending on the cartridge, naturally—will generate around 100 foot-pounds of force, which is a hearty step up from the 50-70 or so you can squeeze out of a snub-nosed revolver chambered in .22 Long Rifle.

Even though the cartridge doesn’t reach its full potential from these small handguns, .22 Magnum has a rabid following and Ruger’s sure to sell these by the crate. And while we don’t generally recommend rimfire cartridges for self-defense, if that’s what you can handle, there are few options out there nicer than the LCR. 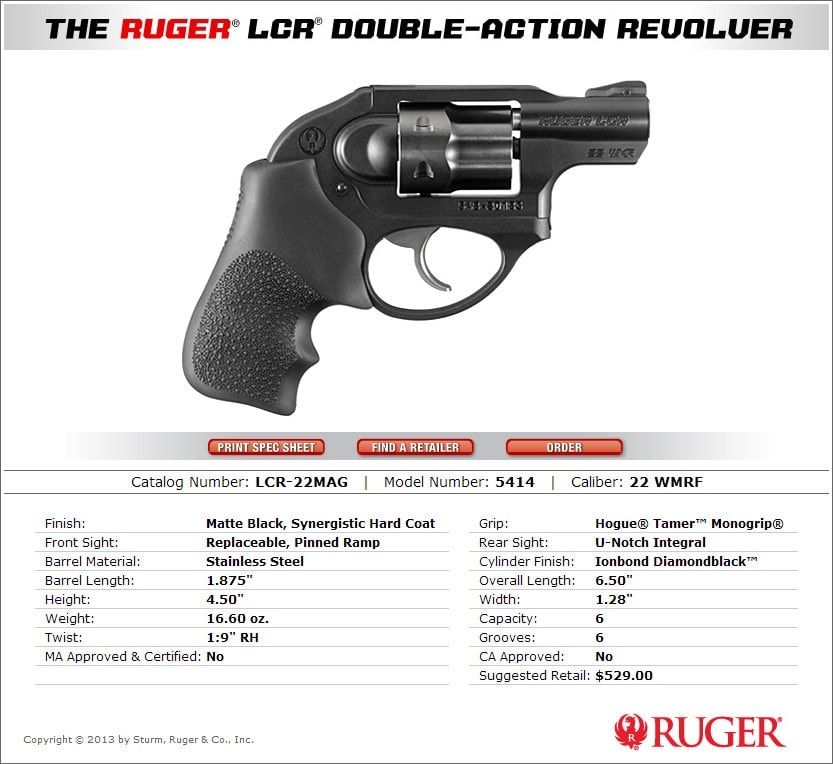 The LCR is a polymer-framed revolver built over a steel subframe for the barrel and cylinder. Combined with the rubber grips, it’s a very soft shooter. But the heart of the LCR is the trigger design. By starting from scratch, Ruger developed a double-action-only trigger that’s smooth, predictable and has about a seven or eight pound pull.

Of course, now that Ruger’s making an LCR in .22 Magnum, they’re going to have to make an SP101 in .22 Mag, too. It’s only a matter of time. A little extra barrel will go a long way with .22 Magnum, and a six-shooter like this will go over gangbusters.

Still, this is a bit of bad news for some people. While there are a ton of .22 Magnum fans out there, people have been asking for LCRs in 9mm for ages. If Charter Arms can do it, why can’t Ruger?

There is also a small contingent of people who have been holding out for an LCR in .327 Federal Magnum. We’re not so sure that’s going to happen, at least, not at this rate. Ruger has dropped the cartridge from their SP101 series, although they’re still chambering their GP100s for it.