Some 150 years ago, the US Army was in the midst of the most brutal war it would ever be a part of, the Civil War. In five years of open combat more than 620,000 Union soldiers died from a population of just over 34-million Americans, nearly 2% of the total population. If these figures were adjusted against today’s population, this would be nearly 6-million killed. These are the weapons they carried into combat against other Americans, those under a Confederate flag.

Some 2,213,363 men served in the Union Army during the Civil War, and by 1863, most Yankees carried a Springfield Rifle. While many other longarms were carried by the army and militia including the Pattern 1853 Enfield, the Austrian Lorenz rifle, and the legacy Springfield flintlocks of previous wars, it was the 1861 series Springfield Rifle that armed the majority of bluecoats. It was also the first mass-produced US-made rifle manufactured in large quantities. In fact, more than a million were built not only by Springfield but also by nearly two dozen subcontractors to supply the largest army seen in North America up to that time.

With a 40-inch barrel giving an overall length of 56-inches (without the bayonet fitted), the rifle weighed in at 9-pounds flat, about the weight of a modern large caliber hunting rifle but a whole lot longer. Unlike the old flintlock smoothbores of the Army of 50-years before, the percussion lock rifled barrel 1861 could reach out and touch a target with some degree of accuracy out to 400-yards and could even be fired in the rain.

For cavalrymen and those few lucky infantry that lucked into one, the Spencer was the bullet-spewing god of the 1863 battlefield. The Springfield rifle, mentioned above, had a rate of fire of about 2-3 rounds per minute. The Spencer, with a short-throw lever action and self-contained cartridges, could fire up to 20 rounds in the same time.

At just 39.25-inches long with a 22-inch barrel, it was handy and about the same size as the M-1 carbine of WWII fame. It fed .56-55 caliber cartridges through a seven shot tubular magazine that inserted through the buttstock.  Up to a dozen magazines were issued to those armed with the Spencer in an early example of tactical reloads. In the hands of small units of rapidly moving horsemen, who could rush around the battlefield like fire brigade, the amazing amount of fire these guns could produce was a key factor in several Union victories. Some 200,000 of these were made and if you were a grunt in 1863, you wanted one.

If Carlos Hathcock or Chris Kyle were in the US military in 1863, they would have carried a Sharps rifle. The Sharps was a specialist’s weapon meant for long-range high precision marksmanship capable of taking man-sized targets well past 500-yards.

The breech-loading rifle used a .52-caliber 350-grain bullet on top of a black powder charge and its precision 30-inch barrel gave it an overall length of 47-inches with a 9-pound weight. They cost $42 whereas the Springfield only cost $12, so they were never very popular with the Army brass. Just 2000 of these were made and most were issued to Hiram Berdans two units, the green-coated 1st and 2nd United States Sharpshooter (USSS) Regiments. Working on the fringes of the Army instead of as line units, the pair of USSS regiments are credited with having inflicted more Confederate casualties than any other regiments in the Army of the Potomac. 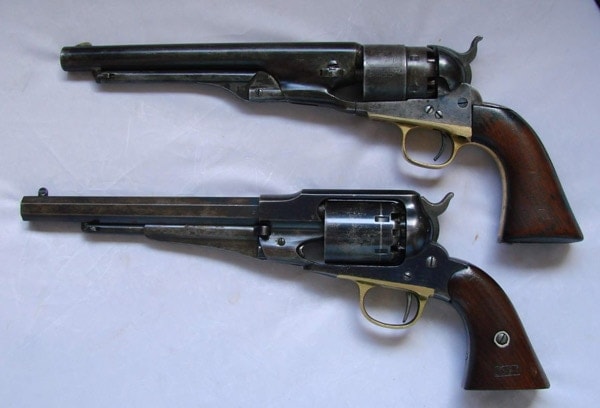 The grunt of 1863 was one of the first who had the luxury of being able to carry a multishot handgun. Previously, as good as it got was a brace (or pair) of single-shot pistols. The two most popular Union Army revolvers were the Model 1858 Remington and the more common 1860 Model Colt. Between the two, nearly 300,000 were produced. Both of these revolvers were 6-shot cap and ball .44-caliber handguns with 8-inch barrels and a weight of 42-45 ounces.

The Remington was stronger due to its “top-strap,” solid frame design and was preferred by many even though the Colt was the primary sidearm of the day.

In 1863, Dr. Richard Jordan Gatling was trying to sell his six-barreled hand-cranked death dealer to the US Army. Unfortunately this early machinegun was (excuse the pun) cranky and it was not until 1865 that his improved model finally found a few sales to the government. In all about 25 of Dr. Gatling’s devices (known today as the Gatling Gun) were eventually used in the Civil War, but the true era of the machinegun was still in the future.

The guns of the Civil War have a mystique all their own with collectors. There are probably more books in print about the firearms of the 1861-65 era than there were soldiers who carried the real things and this extreme interest makes these weapons collectable—often times out of proportion to their actual value. There are still a number of Springfields around in very nice condition that are under the $2500 range. Nice period revolvers, be they Colts or Remingtons seem to run about the same prince as Springfields since there were several more of these handed down through the generations rather than destroyed. Sharps and Spencers, much rarer than the Springfield, often go for much higher on the collector’s market.

For those who want to shoot 1863-style guns, there are always reproductions. Brass framed model 1860 Colt replicas can be had in new condition or even kit form by anyone with a hundred dollar bill and an internet connection. The Ruger New Army is an almost exact reproduction (in steel) of the Remington 1858 revolver for about $400. Entire towns in Italy produce any number of faithful recreations by Uberti, Pietta, and Euroarms of almost any of the guns carried in 1863 with prices that range upwards.

Overall, you can be sure the author who writes the last book on Civil War firearms has not been born yet.