A Maine Newspaper that had solicited concealed carry permit holder information from police agencies around the state for research and investigative purposes has rescinded its request following harsh criticism from state lawmakers.

In a statement that was accompanied by a twitter post of a photo of the governor holding his CCW permit, LePage wrote, “If newspapers would like to know who has concealed weapons permits, then they should know the Governor has his.”

“I have serious concerns that BDN’s request will incite fear among gun owners and nongun owners alike regarding their safety. There is no reason why these records should be public, and I encourage the Legislature to act quickly to make this personal information confidential,” the Gov. LePage continued.

The fuss over the request is largely due to the precedent set by the Journal News, a NYC-based publication that upon obtaining lists of gun owners from local police departments created interactive maps displaying their names and addresses.

But BDN’s leadership claimed that they weren’t going to do what the Journal News did, they were simply going to study the information, examine it to see if any trends related to crime and public safety emerge.

“The BDN has never had any intention to release identifying information about permit holders and said so in our request,” wrote the newspaper’s director of news and new media, Anothony Ronziao in an op-ed.

“We recognize how sensitive this information is, and made sure police agencies knew of this intent. We believe the wholesale publication of permit holder information, as was done recently by a newspaper in New York, is irresponsible,” he added. 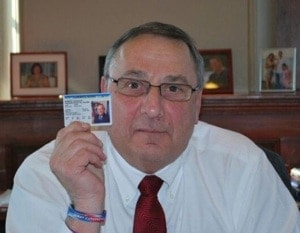 Still, despite their reported intent, Republican lawmakers along with a portion of the paper’s readership found it offensive.

On Thursday, during an emergency meeting about BDN’s request, House Minority Leader Ken Fredette (R-Newport) argued – along with his colleagues in attendance – that in the immediate future a bill should be enacted that protects the privacy of CCW permit holders.

“It’s time to stop harassing law-abiding gun owners,” Fredette said. “We would ask that Democratic leadership speed the process along and hold a public hearing so that this can get acted on immediately.”

In response to the collective outrage, BDN buckled under the pressure and officially dropped its request on Friday, promising to destroy any of the material that was shared thus far.

“We are disappointed with the reaction to our request, which we felt was with the best intentions to help study issues affecting Maine through an analysis of publicly available data,’’ the newspaper’s editors wrote.

“We will continue our reporting, but will use other sources of information to do so.”

Moving forward, the Legislature will look to expedite the approval of the aforementioned legislation designed to ensure gun owners are protected from the prying eyes of the media.

Other states including New York, Virginia, North Carolina have passed or are currently considering passing similar pieces of legislation.

Do you think CCW info should be kept private or made freely available to the public?