Imagine you are a respected gun maker forty years ago.  You have customers in law enforcement on two continents and most of them shoot either .38 or 9mm, both looking for replacements.  What’s the best solution?

This problem was presented in the 1970s to FN in Belgium and their answer came in the form of a rather interesting yet almost totally forgotten revolver. Named the Barracuda, it was FN’s sole entry into the world of wheelguns making it quite a find for the today’s collector.

In the early 1970s, police forces around the world largely used either a 9mm semi-auto pistol, or a 38-caliber revolver. Many of these guns were inherited or nabbed on the cheap from WWII surplus stocks and, after nearly three decades, they were beginning to show their age. Before the rise of Glock in the 80s, revolvers were still kings of the police sidearms, even in Europe. To this day both the German GSG and the French GIGN anti-terror teams train with and use high quality Manurhin MR73, S&W or Ruger .357 revolvers for assaults. With that in mind the Belgian arms conglomerate of FN began work on a unique revolver that could fire either round so that the company could appeal to just about everyone on both sides of the Atlantic. 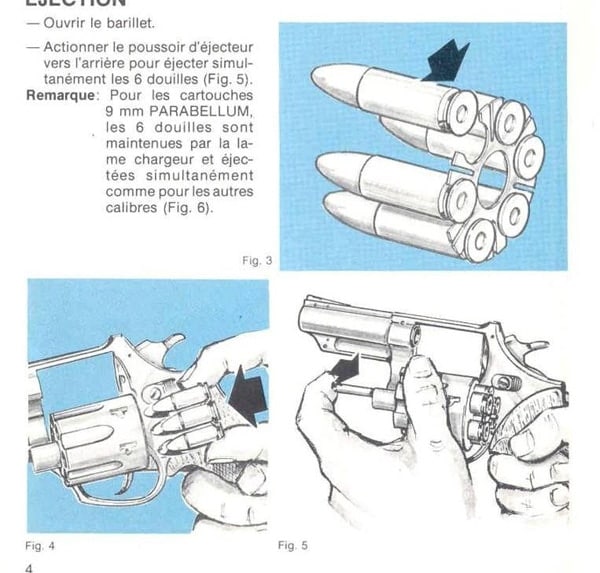 a cylinder that kicked out to the left hand side of the frame, at fist look the Barracuda seemed to be just a Belgian version of a S&W. Its trick card however came in the form an easily changeable cylinder that could switch the revolver’s caliber from 38 special / .357 Magnum to 9x19mm NATO in a matter seconds—three calibers in one gun.

The 9mm round, meant for autoloaders, was rimless which meant that a six-slotted full moon clip was needed to hold and rapidly reload the gun when using the Parabellum ammo. This fix was fairly common when it came to running semi-automatic calibers through revolvers and the concept appealed to both police forces who already issued wheelguns, as well as those who were looking for replacements for elderly WWII-era Walther P38s and Browning HPs.  It also didn’t hurt that most police forces at the time, regardless of what caliber their officers carried, had stocks of 9mm still on hand.

Overall, the feel of this European revolver is very similar to a largeK-frame Smith and Wesson. It should be remembered that literally thousands of Model 10 S&Ws found their way across the pond in the 1940s and 50s to arm the police forces of many countries so the American influence was direct.

The FN/Astra Barracuda has several design features very similar to the classic M&P style Smith such as a pinned barrel, five-screwed frame assembly, and an internal coil hammer spring that can be adjusted for trigger pull weight. With this, the standard trigger pull from the factory was a hefty 11-pounds in double action, which lightened to a crisp 4.84-pound in single action. The gun used a novel 3-inch barrel, which placed it longer than a snub-nose yet shorter than the standard 4-inch Smiths and Colts of the day. Overall length was 8.39-inches and weight came in at 33.5-ounces unloaded. A pair of Colt-style checkered he-man grips came standard.

Built by the well-known and very popular firm of Astra Unceta y Cía of Guernica, Spain, the revolvers were rigidly inspected by Fabrique Nationale in Herstal, Belgium before they received the legendary FN mark on the frame. In FN testing, some 4500 rounds in three different calibers were fired with no failures.

FN hit the road in 1974 promoting their new convertible revolver around the world. 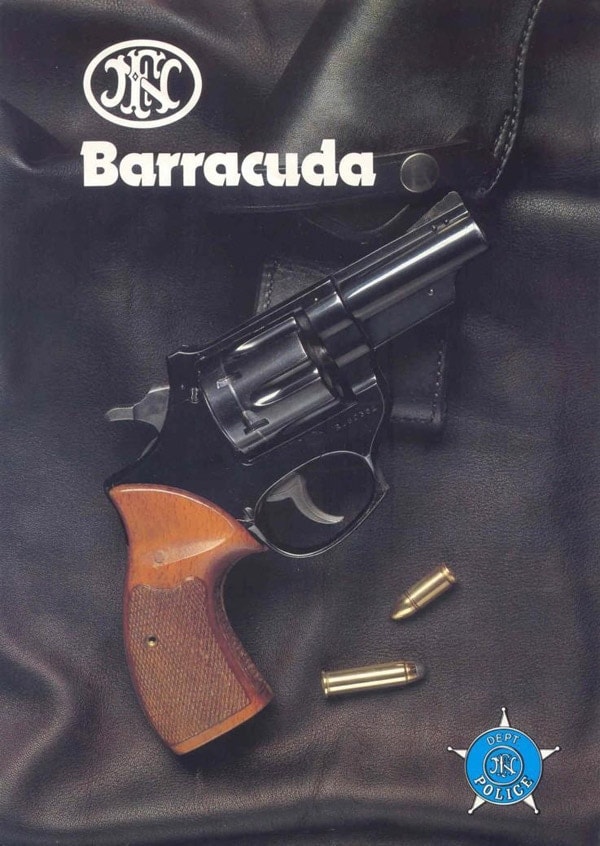 Jane’s Defense Systems mentions that there were also cylinders made in the long obsolete 9x23mm Steyr round (used in the 1912 Steyr Hahn) and in .380 for sale to countries unknown. Jordan and Spain adopted the revolver for police and some limited military uses. Even with a couple of police forces behind it, the gun never really was a success. Like the phenomena where carmakers will market the same auto under two different names (remember the Buick Regal and the Old Cutlass?), FN and Astra sold near twin revolvers at the same time. Astra marketed theirs as the “Police’ model from 1974 while FN sold their “Barracuda” version as late as 1989.

By the 1980s, the move to inexpensive wondernines like the Glock saw the near total end of the revolver in police use. With the revolver market shrinking and Astra’s merger with Star Firearms, the Barracuda convertible faded into history. The only difference between the two revolvers besides the markings is in the shape of the trigger guard and a slightly altered rear sight. The barrels will always be marked “357 CTG” while the cylinders will be marked either ‘9mm’ or ‘357’ to keep users in the right caliber. 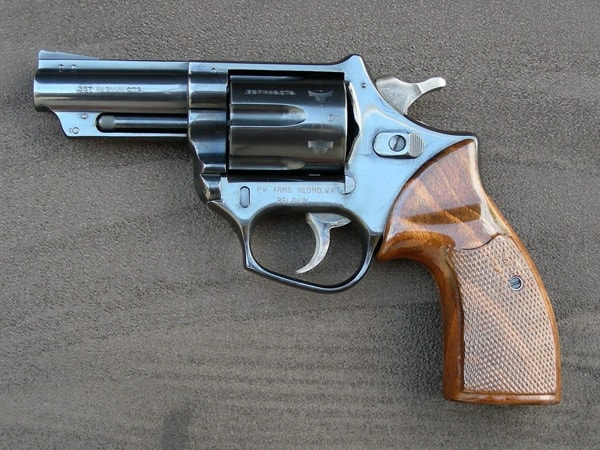 Barracuda and Astra Police .38/357 revolvers in very good condition. Selling for about $275 in either case, you would be hard pressed to find a better built wheelgun on the used market for the same price. They take standard HKS and Safariland six-shot Smith L frame speedloaders. Given that it is still possible to find 9mm cylinders for the gun at a good price adds a further layer of interest to both collectors and general users interested in a .357 frame that shoots a budget caliber. However, these cylinders aren’t all that common and if you find a nice complete Cuda with both the 38 and 9mm wheels in one set, the price can be closer to $600.

Which overall, isn’t bad for a Barracuda convertible, of any type.