Being a gunfighter in an outlaw world

Imagine what life was like in the old West, a time when in most cases the only help you had was the gun on your hip or in your saddle scabbard. You were expected to defend yourself back then because you couldn’t rely on others to do it for you. Even if you were a lawman in one of those rough cow towns there was no back up. No SWAT teams, no phones, nothing fast, nothing easy.

Perhaps it’s my age, but when I think of the term “gunfighter” I get images of Wyatt Earp, Bill Hickok, Bill Jordan or even James Arness on Gunsmoke and I believe that we can learn things about the nature of self-reliance from the way these mythical gunslingers responded to a world of danger and unpredictability, as real then as it is today.  Indeed, I believe that thinking like a gunfighter (who had to rely on themselves and no one else to save hides) is one great step towards preparing for the reality of self-defense scenarios in this imaginary world of instant technology.

You can count on me

If you’re asking me, I think people today rely way too much on the promise of help from others when they are in danger and it is one of the most perilous things people have grown accustom to in 2013. Everyone—children, adults, security guards? rape victims?—has been instructed to call 911 first rather than address the problem and when the worst happens, these people wonder why help did not arrive fast enough.

I remember after I got out of high school my first job was to work overnight at a convenient store and every cop who knew me told me to get a pistol permit because they would not get there in time in the event of an armed robbery. That was the first time I saw the safety illusion of 911 and having police who I knew and respected tell me flat out to get a gun because of their response time left an impression on me you can see to this day. In fact, everybody should be so lucky as to work at a convenient store at some point in their life: working overnight, dealing with drunks, druggies and all the other flakes that come out at night taught me pretty quick that when push came to shove, I was only going to have myself to rely on.

There was one store I worked that had such poor regard for the safety of its employees, not only did they advise you to call 911, if you needed to call anyone you had to go outdoors and use a payphone. There were no security cameras, no panic buttons—nothing. The reason?  Simply, the company that owned the store was too cheap to invest in the basic safety of the people who worked for them.

One January night a nearby convenient store was robbed and the clerk was shot and killed. It was big news.  The clerk opened the register and gave the robbers all the money, but they weren’t satisfied so the robbers ordered him onto his knees.  They shot him in the head for no reason other than they said they wanted to kill someone.

As you can imagine, such senseless violence striking so close to home put me on edge and even more so when, after talking with two clerks at other neighboring stores, I found out my store’s security was the worst. They both had cameras and alarms and one clerk was packing a pistol that her boss had given her “the go ahead” to carry on the job. Realizing I was in the worst shape and expecting very little support from my employer, I decided that I had to take matters into my own hands to keep myself safe. I was eighteen and at the time only had two guns, a full size Enfield rifle and a Model 94 .30-30.  I decided that under the counter at my shop was a good spot for that Winchester.

The gun that shooed the pest

At about 3:00 am, a guy walked into the store that set every warning bell off in my mind. For over an hour he stood by the magazine rack, reading comic books and not saying a word. I watched him like a hawk and when he went to bend down to pick up a book I saw the butt of a revolver sticking out of the back of his grey sweatpants. I reached down and quietly levered that Model 94, staring at him in case he made any sudden movements.  I can’t remember being afraid but I’ll never forget how quickly that man stood up and turned and walked out of that store.  He never returned.

After that incident, I decided that clerk work really wasn’t what I wanted to do without a real way to protect myself. Had I not had that Winchester who knows what could have happened?  I would have had no way to prevent an attack.  It’s also gross to think that had I used my gun, my employer may have thrown me to the wolves. 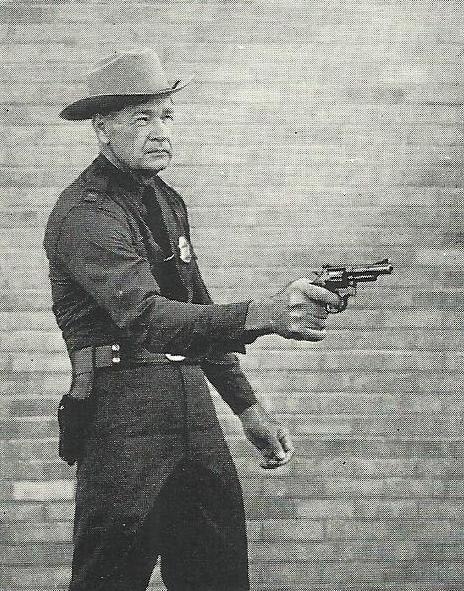 One thing I think we all must learn to realize is that there is no help when it all goes wrong. That’s why they say, all. If the cops could be everywhere at once there would be no inmates in jail because not even stupid criminals usually take that type of risk. Budget problems make things worse.

Get comfortable with the idea that you are your own cavalry and that means more than being a great shot, the best even.  If you don’t have the mindset that you have to rely on yourself to pull your own fat out of the fire on the street when it matters then you might as well hang it all up right now. This is how having the gunfighter mindset comes in. You need to think the same thing over and over; there is no one here but me. One can only imagine what the real gunfighters like Bill Hickok, Bill Jordan and others thought when they actually had to enforce the law. It was them or the other guy with no one else to save them if things went south.

Who is a gunfighter?

Some folks reading this might think that thinking like a gunfighter is a bad thing, but what was a gunfighter back then? I would say a gunfighter was anyone that wore a handgun as an everyday part of their life. Hollywood portrayals would have you believe it was someone who shot their gun on a daily basis but historically most gunfighters had their careers greatly exaggerated, with really only a handful of incidents that required them to draw on someone.  And really, is picturing yourself a gunfighter in a world of outlaws really that far fetched?

The truth is we have no idea where or who a threat is going to come from so being prepared to do what is necessary is necessary.  It also means that you are going to have to prepare to go it alone, but not at the expense that you stop seeking the safety of a group. Being and acting alone makes you vulnerable in the eyes of the two-legged predators and making good friends who have your back (and are also prepared to act alone) is equally important to self-defense.

Most people cannot envision the world as full of outlaws but that is how it is, they do in fact walk among us. You don’ know if the person beside you may be wanted for a crime, may be on parole, or may be someone troubled enough to act out against anyone and everyone.

You should be prepared to act, because the only help at hand might be the person you see in the mirror.