Desperate to track the ‘illegal’ guns crossing their border, Mexican lawmakers want the U.S. Senate to create a registry of all commercialized firearms in the states that line the U.S.-Mexico border: California, Arizona, New Mexico and Texas.

The alleged purpose of the registry is to help law enforcement in both countries trace firearms that have been used in the commission of a violent crime.  Mexico, which is in the midst of an all out drug war, has seen it’s gun-related homicide rate skyrocket in recent years.

According to the Blaze.com, Mexico’s Permanent Commission, a government entity that meets when Mexico’s Senate and the Chamber of Deputies is in recess, approved the measure requesting the registry on Jan. 9.

In the past, the U.S. has enacted policy aimed at curbing violence in Mexico.  During his first term in office, President Obama along with the Bureau of Alcohol, Tobacco, Firearms and Explosives pushed through the ‘long arm multiple purchases tracking mandate’ also known as ‘Demand Letter 3.’

‘Demand Letter 3’ requires the approximate 8,500 FFLs or gun dealers conducting business in those aforementioned border states to report to the ATF individuals who purchase more than one semi-automatic rifle – with detachable magazine, greater than .22 caliber – within a five day period.

Like with the registry, the ostensible purpose of the reporting requirement is to thwart illicit gun trafficking along the U.S.-Mexico border where straw buyers purchase ‘assault weapons’ for Mexican drug cartels and gangs.

Following the implementation of ‘Demand Letter 3,’ pro-gun organizations filed lawsuits challenging the legality of the reporting requirement.  The National Shooting Sports Foundation, which spearheaded the legal battle, argued that the ATF clearly exceeded its lawful authority under the Gun Control Act by enacting such a measure without the consent of Congress.

However, last January, a federal judge upheld the mandate, ruling that there was no abuse of authority.

“Congress has effected a delicate balance between ATF’s regulation of firearms and the right to privacy held by lawful firearms owners,” Judge Rosemary Collyer wrote in a 21-page ruling. The ATF’s reporting requirement “did not disturb that balance.” 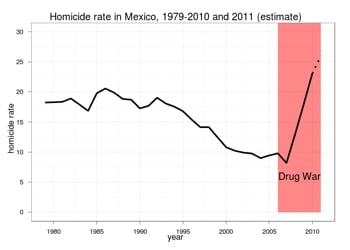 By making an appeal to the U.S. Senate, it appears that with respect to the border-state gun registry, Mexican lawmakers recognize that they cannot side-step Congress on this measure.

Nevertheless, ‘Demand Letter 3’ established an important precedent.  That is, the U.S. government is willing to subvert the rights of law-abiding gun owners and gun dealers to appease Mexican lawmakers (Empirically speaking, it’s unclear as to whether ‘Demand Letter 3’ had an impact on the violence in Mexico.  That said, common sense suggest it hasn’t – see graph – that it was just a political ploy).

Obviously, there’s also the elephant in the room, the fatally-flawed gunrunning scandal known as Operation Fast and Furious, where the ATF forced law-abiding FFLs to sell firearms to known straw purchases with close ties to Mexican drug cartels.

Many of the 2,000 firearms that were lost in this failed sting operation where used in countless crimes, including murder.  In fact, at least one of the F&F guns where found at the murder scene of U.S. Border Patrol Agent Brian Terry.

It’s unclear how this enormous blight on the ATF, DOJ, and Obama administration’s record will impact the Senate’s consideration of the gun registry request.  But it’s undoubtedly going to be part of the conversation.