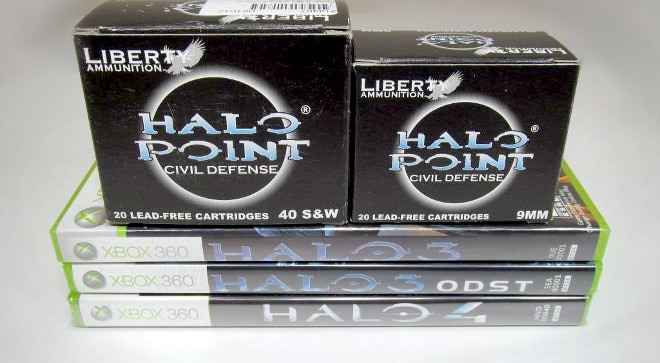 Liberty Ammunition makes a radical and different type of lead-free frangible ammunition. It’s designed to break apart on impact, but unlike the majority of frangible ammo, it’s designed to be a no-compromises self-defense load, promising deep penetration in addition to fragmentation.

It’s been around for about a year under the name “Halo Point Civil Defense,” a play on words and high-velocity trade dress lawsuit in the waiting.

While the ammo is original, the packaging was not. The company took liberty of Microsoft’s “Halo” video game franchise artwork, including the font style for the product name. Liberty Ammunition voluntarily surrendered their trademark for Halo Points late last year, although it’s possible to find some boxes of the original ammo here and there.

It is not out of production, of course. Liberty Ammunition continues to manufacture the stuff under the short name “Civil Defense” ammunition, and despite missing the Master Chief’s unofficial blessing, remains the same.

What makes Halo Point — that is to say Civil Defense — ammo different is that this stuff is hot. Their .40 S&W load uses a 60-grain bullet that promises velocities over 2,000 feet per second; rifle speeds from a handgun.

At the speeds they travel, Civil Defense bullets don’t exactly stabilize. They’re not terrifically accurate, although Liberty Ammunition claims two-inch groups are possible at 25 yards; they lose speed quickly and are only rated effective out to 25 yards.

So they’re not entirely without compromises. How do they perform inside 25 yards, then, is the question. Pocket Guns & Gear put a few rounds under the glass to see if they deliver on penetration and energy transfer.

“The stretch cavity is almost round and very close to six inches tall.  As we saw in the video analysis of the gel block artifacts, the stretch cavity is really the fragmentation cavity where the bullet is breaking apart and sending 17 fragments out in a circular pattern from the primary wound channel.  The tail to the right of the fragmentation cavity is the bullet base, or 18th fragment, that continued to penetrate more deeply into the gel block.  Calculated energy was 540 foot-pounds on this test shot [emphasis ours].”

And that’s with a Kahr PM40 with just a 3-inch barrel. In their other tests with that pistol, the average energy of self-defense loads was “between 350 and 370 foot-pounds.”

The penetration was not quite as deep as promised, with most fragments — all but the base of the bullet —  stopping shy of 12 inches. It’s possible that with a service pistol it will do better. That being said, Civil Defense ammo is pretty intimidating, at least at close ranges. To be fair, it is very uncommon for most conflicts to take place at longer ranges.

And there also remain to be seen other tests, such as how this ammunition perform through barriers, particularly common ones like denim and other types of clothes, but also drywall and plywood.

At first it was pretty easy to think of this ammunition as a gimmick, with its unbelievable velocities and video game branding, but it seems Liberty Ammunition is taking things a bit more seriously, and with preliminary tests like these, we’re coming around on this ammo.

Finally, it’s actually in-stock if you shop around. That alone makes it worth checking out.