The 500 Thunder Ranch 20th Anniversary shotgun is a compact 12-gauge with an 18.5-inch barrel, cut-down synthetic stock with a 13-inch length of pull and 6-round capacity with both 2.75- and 3-inch shells. It was introduced last year and maintains the fixed cylinder bore with a breach barrel muzzle and modular tri-rail forearm setup. Really the only difference is the new engraving. It still comes with a black padded sling and a very approachable MSRP of $493 which translates to a street price between $350 and $400.

Their new Thunder Range tactical over-under is based on Mossberg’s Maverick HS12, which is a humble break-action shotgun, simple and low-priced. It has 3-inch 12-gauge chambers and dual locking lugs for a tight fit and optimal reliability. It has basic controls with a tang-mounted safety and integral barrel selector.

The barrels measure in at 18.5 inches and have fixed cylinder chokes. It also has three fixed rails, one for optics and two for accessories.  The top rail is grooved as a rear sight; paired with a fiber optic front sight it’s got to be one fast-handling shotgun. It’s all-black save for the Thunder Ranch logo, with a blued finish and synthetic furniture. It’s a little more than the 500 with an MSRP of $549, which means we still expect to see it in stores for less than $500. 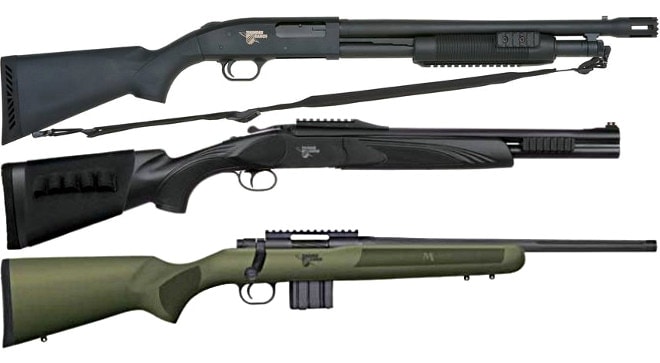 What’s probably the most interesting addition to the Thunder Ranch series is the new Thunder Ranch MVP. Similar to the recently-announced Patrol rifles, this bolt-action rifle is chambered in 5.56 and uses AR magazines. Unlike the Patrol Rifles, it has a longer 18.5-inch fluted medium bull barrel with a 1-in-9 twist. This rifle is designed to work with a very wide range of ammo types, including lighter, faster loads that benefit from longer barrels.

It shares a lot of MVP Patrol rifle features, including the traditional wooden stock (albeit with a tactical olive drab rubberized finish) a threaded barrel for muzzle devices and suppressors, two swing swivel studs front and rear and their user-adjustable trigger that can be set to break between 2 and 7 pounds.

The Thunder Ranch MVP does not have iron sights, instead it has an integral top rail for optics. Being the coolest new gun to join the Thunder Ranch series, it’s the most expensive, with an MSRP of $934, or $800 or less in stores most likely.