A 25-year-old father opened fire on three armed intruders, who kicked open his door in the middle of the night Sunday, killing two in the process. Now he, his son, girlfriend and mother have relocated out of fear the third man will come back. 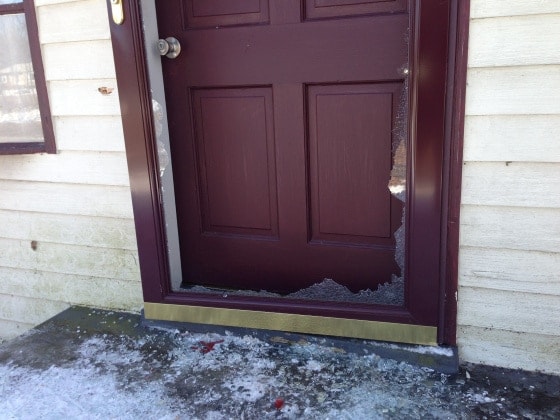 The front door, where one suspect was killed.

The incident happened around 3:30 in the morning when the trio kicked in the front door. The young father told the local CBS affiliate that “it sounded like a car running into the side of the house.” The crash woke him and his two-year old son, who was sleeping next to him, up. The father then grabbed his gun, which was located nearby, and when he saw the armed intruders, opened fire.

One suspect fell dead inside the house while the other collapsed in the front lawn. The third suspect fled on foot as the father dialed 911.

The Prince Edward County Sheriff’s deputies that responded to the 911 call used dogs to search for the third suspect, the Richmond Times Dispatch reports, and were able to track the suspect to a highway, where they believe he fled in a vehicle.

The two men killed by the homeowner are still being identified, and the third man has yet to be found.

Neither the father, nor his son were injured.

“The way it looks he was defending himself,” Prince Edwards County Sheriff Wesley Reed said to the local NBC affiliate. He added, “We’re telling people in Prince Edward County to just be aware of your surroundings and tak all the extra precautions that you can until we catch this suspect.”