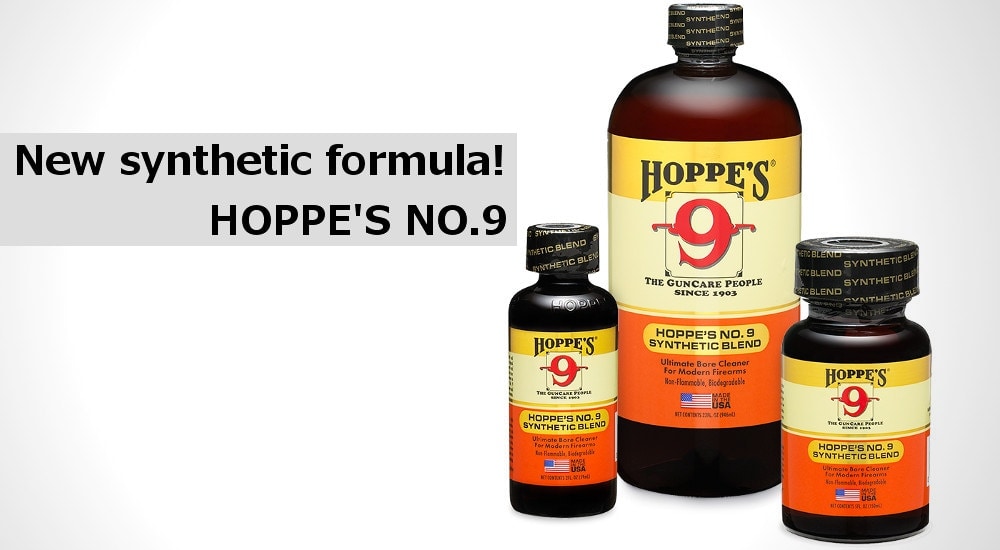 That smell … to not have it is a kind of heartbreak. The smell of Hoppe’s No. 9 is one of those magic smells that bores into your amygdala and takes you back through every day at the range all in one whiff.

The smell of Hoppe’s No. 9 is so compelling they make N0. 9 air fresheners. Hoppe’s could make anything No. 9-scented and have no problems selling it. If they made deodorant they could sell that, too.

And if the only measure of quality gun cleaners was the scent, there wouldn’t even be a market for other products. The truth is that Hoppe’s is getting long in the tooth. The 11-decade-old formula was designed to clean up lead and black powder residue, and while it works with modern ammo, other solvents simply work better.

Until now. Hoppe’s has developed a new modern gun cleanser, called Hoppe’s No. 9 Synthetic Blend. From their press release:

“Hoppe’s No. 9 Synthetic Blend builds on the tradition established by Frank Hoppe more than 110 years ago when he developed Hoppe’s No. 9. Hoppe concocted the unique formula to combat the corrosive qualities of smokeless gun powder, which at the time was being sought after by the firearms industry as a replacement for black powder. While the challenge was different at the turn of the 20th Century, the commitment to innovation at Hoppe’s remains the same. Designed for today’s modern firearms and ammunition, Hoppe’s No. 9 Synthetic Blend is a powerful bore cleaning solution.

“The new Hoppe’s No. 9 Synthetic Blend maintains the standard set by the original formula while addressing the demands of the modern firearm. The new synthetic blend deeply penetrates the bore for superior removal of carbon, lead and copper fouling. In addition, the bore cleaner is safe on materials used on today’s firearms, including anodized aluminum, titanium, steel, chrome, nickel, plastic, polycarbonate and rubber.”

With this new recipe you don’t have to use one solvent to get your guns clean and then Hoppe’s to make ’em smell right. You get it all with one pass — at least we hope. We’ll have to smell it to believe it.

Hoppe’s No. 9 Synthetic Blend will be available in quantities ranging from two ounces to one gallon and, depending on how much you buy, run between $5 and $100.