While walking around gun shows chances are you may come across a pistol that looks like the missing evolutionary link between the Colt Woodsman of the 1920s and the Ruger MkII of today. With an exposed hammer, steel construction, and single-action design, the High Standard HD is more a throwback than an antique but it is still highly sought after today.  Its peculiar history may be a reason why. 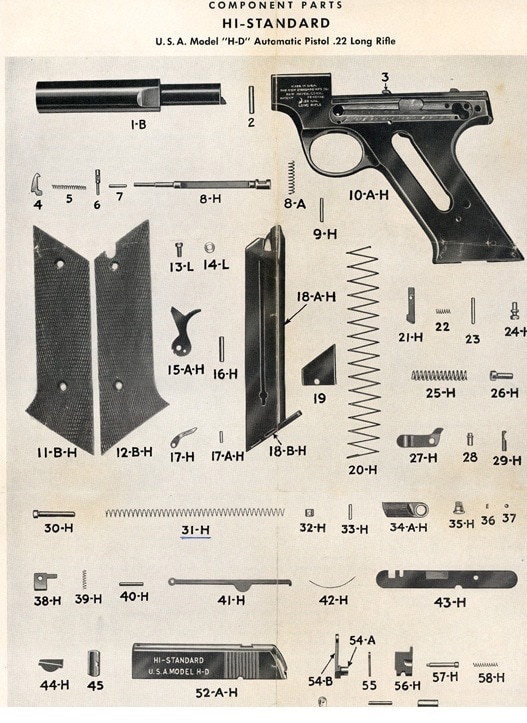 caliber pistols in the 1930s. Starting with their Model A and Model B designs they offered their new semi-autos to the public at a low price that made them immediately stand out in the cash strapped Depression era. In 1940 with some early successes in their pocket, they moved forward with what was to become their most popular model for the next twenty years, the H-D.

When most folks pick up a High Standard H-D for the first time, it’s striking to many how solid and beefy it is for a “budget .22”, which is exactly how engineer George Wilson intended it. Introduced in 1940 when High Standard gun makers were not afraid of steel and wood and the handgun tipped the scales at 40 -ounces with single stack 10-round magazine. A blowback single action pistol with a canted Luger-style grip and an exposed hammer, the gun was simple and accurate. Built around a one-piece frame with a short slide and pinned barrel, meant it was also rugged. 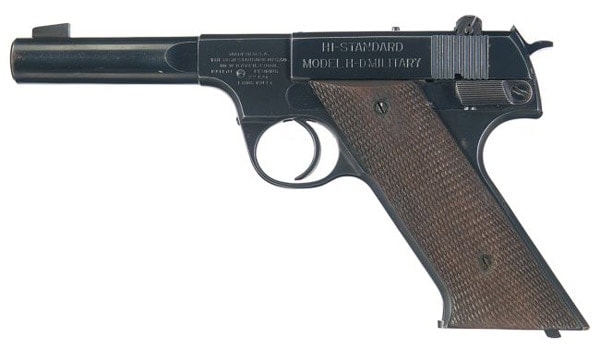 With either a 4.5-inch or a 6.75-inch barrel, the pistol points naturally and mimics the feel of a full size pistol with virtually no recoil from its 22LR round. This enabled the gun to remain on target without muzzle flip and made it a direct competitor to the Colt Woodsman pistol.  In fact, the High Standard fast became one of the most popular guns for shooters who wanted a small-bore handgun for plinking or competition. 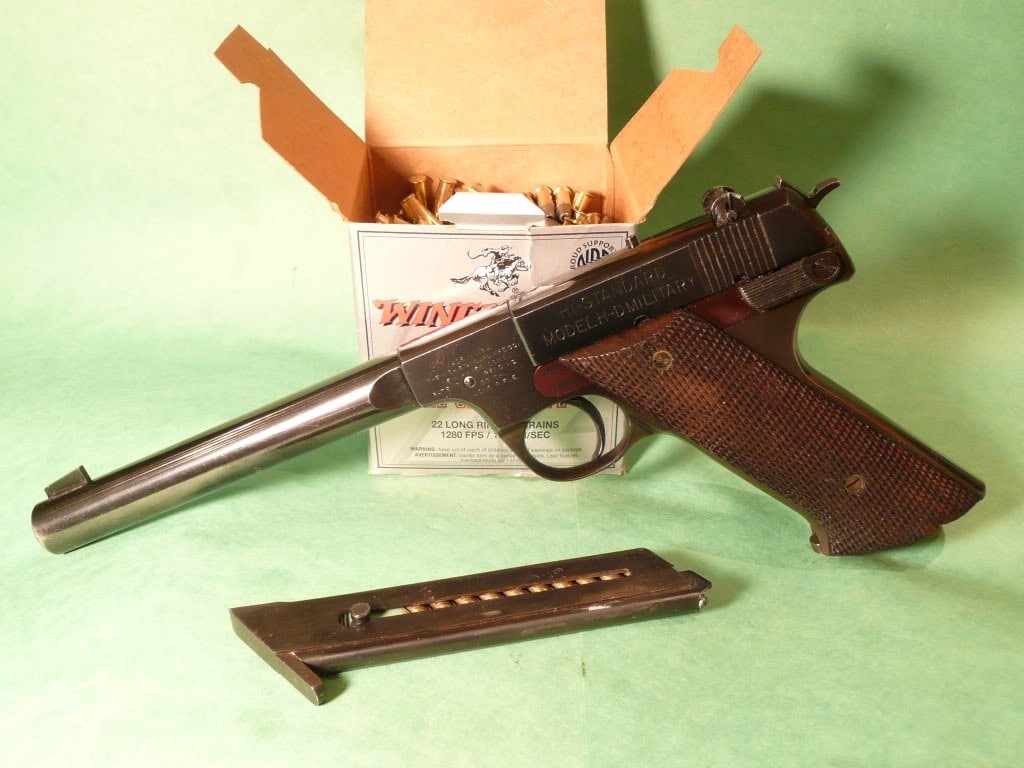 High Standard H-D Military issue pistol. The slender magazines should be handled with some care.

In 1942, the War Department came calling and ordered 34,000 Model H-Ds for the Army to use for basic pistol training. The large frame H-D had much the same feel, operation, and sights of the Colt 1911 and it was thought that these simple guns could be used to introduce new shooters to the fundamentals of pistol marksmanship before moving on to the stout .45 ACP Colt.  Ease of use aside, the price tag was also a huge selling point; the 22 LR was cheaper by far to shoot and allowed valuable war ammunition to be sent to the front rather than stockpiled at training depots.

Besides overt military use in training, there were also those who thought the H-D had a place at the front as well. Or more specifically, behind it.

During World War 2, US secret operatives found themselves in need of small caliber 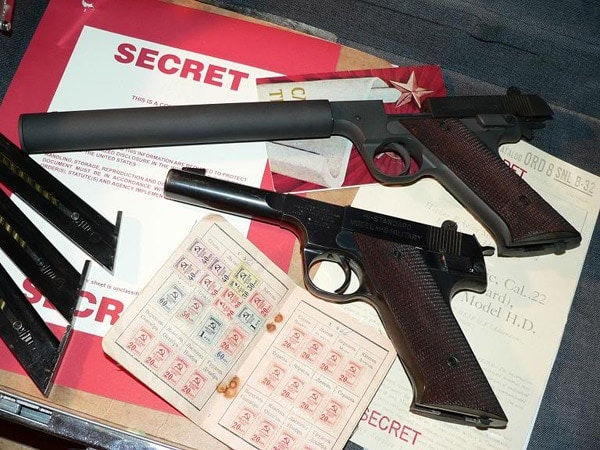 suppressed pistols. In response to this, the OSS, forerunner of the CIA, ordered a secretive batch of guns from High Standard. From about October 1943- March 1944 just over 2600 H-Ds were made with suppressors for use by the OSS. Known as the iMS (Military-Silent) variant they fall into serial number range 114,000-117,000. These guns used an integral suppressor designed by Electric Bell Laboratories that dropped the sound levels of the pistol to less than 20dB, or about the sound of a cough. Delivered to the War Department, they were shipped overseas for immediate use and today a handful still exist in private collections and museums. It’s believed that as many as 400 of these are still in CIA and DOD armories today. 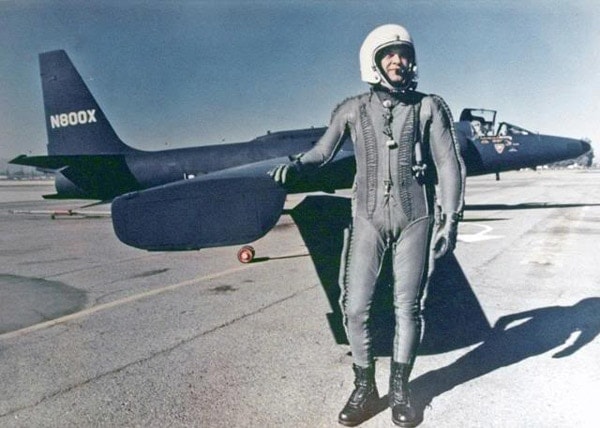 In 1960, sheepdipped US Air Force Lt. Gary Powers was somewhere that never existed in a plane that wasn’t on the official record. His plane, the U-2 recon aircraft was shot down over the Ural mountain city of Sverdlovsk in the Soviet Union.  Placed on public trial in Moscow, Powers admitted that his craft was in fact a CIA operated top-secret spy plane. In the trial, the Soviets produced a silenced Hi-Standard model USA-HD caliber .22LR, serial number 120046. The serial number is not listed in High Standard’s books and it has commonly been surmised that it was sold on spec to the CIA for operatives in the 1950s. Others were reportedly made without any markings whatsoever to be ‘sterile’ and thus deniable.

After WWII, High Standard kept the basic H-D in full production for a decade and it experienced good commercial sales. In 1955, production of the H-D ceased and it was replaced by the very similar Olympic series, which in turn was itself replaced by the Victor. They are an affordable gun and popular with collectors at all levels.  In all more than 200,000 were produced. 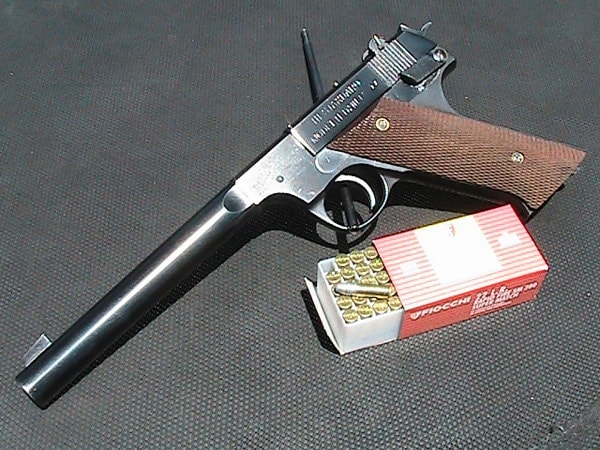 High Standard H-D pistol markings can be used to easily determine the guns year of manufacture (and price point).

Those 6900 pistols marked simply “High Standard H-D” were made between1940 to 1942. If marked “High Standard Model H-D USA” they are of the 44,000 made from 1943 to 1946 for the military (these should also have a parkerized finish). The final models, marked “High Standard H-D Military” are the most common, with 150,000 produced from 1946-55. The value of these pistols today starts at $250 for shooting grade models in good condition to $700 for minty grades with a little extra green for the older models.

When looking for marks, if you find good and crisp “US” property marks it means it is a military surplus piece and you have an excellent deal on your hands.

They still make wonderful shooters for plinking, light competition, and small game hunting. Much like Power’s U-2 pistol, these guns are the subject of many custom suppressor makers for experimentation.

The magazine lips have to be perfect for the gun to function. They run about $50 so be sure to treat them gingerly to avoid bending or knocking them out of shape. 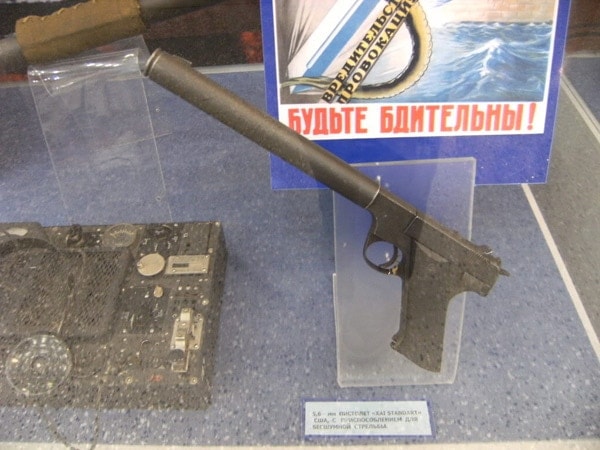 High Standard still exists as a company even though like many it has morphed and changed ownership/factories over the decades. Today they continue to sell replacement parts for most of their legacy pistol designs but tend to support the 1960s-present model Victor more than the H-D. It should be remembered that the Victor is the grandson of the H-D from a design standpoint.

As for Powers and his gun, the Russians gave him back after more than a year in a hard labor camp but still have yet to give back his High Standard.

Vladimir Putin probably quietly plinks with it on weekends.