On Wednesday, state lawmakers on Utah’s House Judiciary Committee approved four pro-gun bills, including one that would legalize constitutional carry for all law-abiding Utahans.

The constitutional carry measure, known as HB76, was voted through 7-2 with only two lawmakers (both Democrats) opposing it.

If passed, Utahans would no longer have to obtain a permit – which involves paying a fee, proving one has taken a firearms safety course or has had military experience, passing a background check and showing ID that one is at least 21 years old – to carry a concealed firearm.

Rep. John Mathis (R-Vernal), the bill’s sponsor, said that although he “struggled” with the idea of proposing the bill in this legislative session, he thought it was necessary. 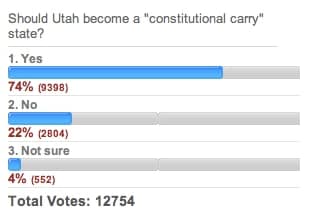 When the panel pressed him about the ramifications of his bill, i.e. would it encourage more people to purchase firearms, Mathis simply said, “I think those who have firearms and use firearms have them and use them now.”

In other words, it wouldn’t be that big of a deal and it would cut out some of the red tape making life easier for responsible gun owners.

Though, those opposed to the notion of permit-less carry feel differently, that it would have a significant impact on public safety: more gun deaths, more accidental discharges, etc.

“This bill blatantly disregards a common-sense interest in public safety and thumbs its nose at the most credible research on gun laws,” said Miriam Walkingshaw, a member of the group Utah Parents Against Gun Violence, as reported by the Cache Valley Daily.

Another critic, Jane Hill of the Catholic Archdiocese of Salt Lake City, said HB76 creates a culture of “intimidation.”

“Eliminating the very few restrictions Utah has on carrying deadly firearms fosters a particular culture in this state,” Hill said, as reported by the Salt Lake City Tribune. “This bill sends a clear message about Utah values and the message we think it sends … is that Utah values firearms more than the culture of life.”

Proponents often counter these arguments by pointing to the other four states that have passed constitutional carry – Arizona, Alaska, Wyoming and Vermont (Montana has its ‘outside city limits’) – noting that, all hell has not broken loose.

The other three bills that were approved on what became known as ‘Gun Day’ at the state Capitol were:

HB268, a bill that would prohibit law enforcement from slapping someone with a disorderly conduct charge for publicly displaying a weapon, provided he/she isn’t doing anything illegal or irresponsible.

HB211, would exempt out-of-state military members stationed in Utah from having to obtain a concealed carry permit in their home state before being allowed to apply for one in Utah.

HB121, would permit gun owners or their cohabitants to store firearms with local law enforcement for up to 60 days if they feel a family member is a potential danger to himself/herself or others.

All four bills will now head to the House floor for consideration.