Arguing For and Against ArmaLite 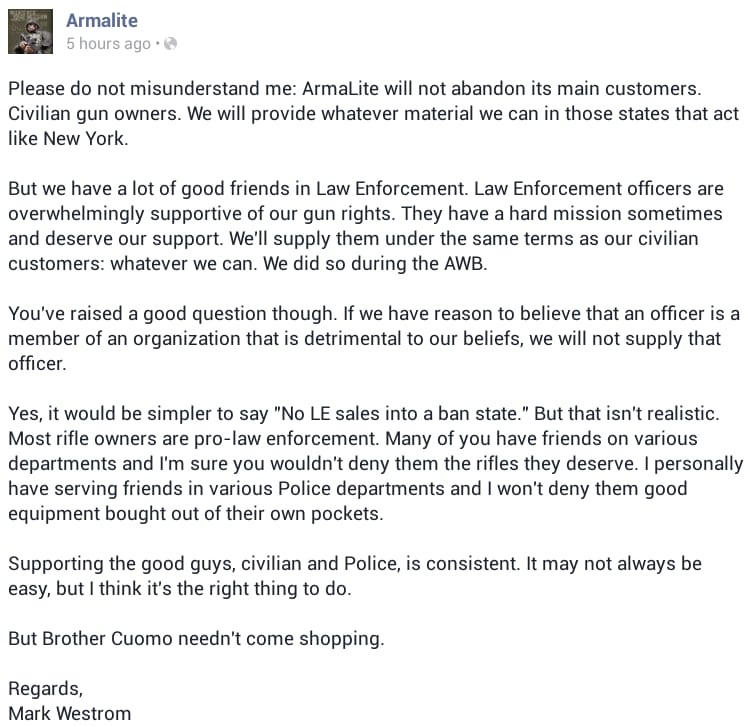 One of the many layers of the gun control debate is whether or not companies should treat government agencies differently than they treat the general public. A handful of companies have stood up, like LaRue Tactical, Olympic Arms, Cheaper Than Dirt and many others, saying that if they’re not allowed to sell their products on the commercial market, they will not serve local government.

This has kicked off a grass roots campaign that is calling for other companies, small and large, to follow suit. Some of the emails, naturally, come off angry and demanding, and the companies are dealing with a lot of it.

Things went sour Monday when an ArmaLite employee sent a frustrated reply to one such email. “First of all I would like to say thank you for filling my email with all this spam email … You need to convince the law enforcement agencies and the common people about their mistake in electing these officials and have them removed,” signed, Pat Raley, master armorer and sales representative.

In effect saying ArmaLite has no problems selling guns to law enforcement, government agencies and the like, no matter what the laws of the land are.

This was in stark contrast with their previous position, which was that ArmaLite would not sell to agencies what was prohibited to the people, as is the case with ArmaLite’s Chicago and California sales — that is to say, lack of sales.

“I think a bit of clarification is in order.

“The root of the matter is a HUGE series of inquiries by both email and telephone asking ArmaLite to cut off sales to New York and other states which deny its citizens the right to own our rifles, as several other firms have done. Some of the contacts have been duplicates of others and some were so redundant that they appeared to be spam. Many of them have been rude and I’m afraid one of my staffers thought that he was responding to a spammer and was more terse than he should have been. Once he realized what happened he came to me and apologized.”

The lack of poetic justice is not the same as injustice; is it hypocritical for companies to sell to government agencies — to provide police with the same tools gun rights advocates are fighting so hard for?

Depending on your perspective, ArmaLite is either threading the needle or sitting on the fence on this one. Even LaRue Tactical, the first big name to come out against law enforcement sales in the face of current and proposed gun control laws, continues to sell rifles to the military and federal agencies.

If ArmaLite halts law enforcement sales, a dozen other companies will step in to take their place. They have to consider doing business with the government or downsize or even shut down. And there are many companies that provide the government with things that are banned to the public, not even limited to guns.

And why just ArmaLite? Where’s the outcry against Colt, Glock, Smith & Wesson, Springfield, Remington, Ruger and the dozens of other companies that sell to law enforcement?

Police departments and other agencies will always be in need of new firearms, so is it wrong for companies to sell guns to them?

Robert Farago seems to think so. And he’s made quite the case for it, at least for New York. Under current laws, including the recently-passed SAFE Act, it is in fact illegal for ArmaLite to sell guns to New York customers, possibly the police in particular.

“So, at least in NYS, private sales of ‘assault weapons’ to LEOs in this state is a violation of the NYS Public Officers law, whereas LEOs use their position to seek exemptions to state law as well as seeking unwarranted privileges not available to the general public, simply by virtue of their position within the government.

“Additionally, the recently enacted NY SAFE Act (which outlaws the sales of so-called ‘assault rifles’ in the state), does not even exempt LEOs in their official capacity as it currently stands, let alone for private sales. Any sales to LEOs in NYS, including private sales, is in direct conflict with State Law.”

Of course, New York governer Andrew Cuomo’s office has stated that they will not be enforcing this law when it comes to prosecuting the police, and that in the future a legal exemption will be added.  So what’s the point?

While it’s clear that the public is happy to reward companies who refuse to sell to departments and agencies so long as their jurisdictions have enacted gun control laws, the question remains: should companies that continue to do business with the same government agencies be punished?