One thing is certain — reloaders are a particular sort, with benches chock full of the tools of the trade.  The art of reloading is one that must be treated with discretion and a mind to safety.  However, do we reloaders hold true some incorrect ideas of our craft, or have we been right-on all along?  Lets take a look at some of the topic handloaders like to debate. 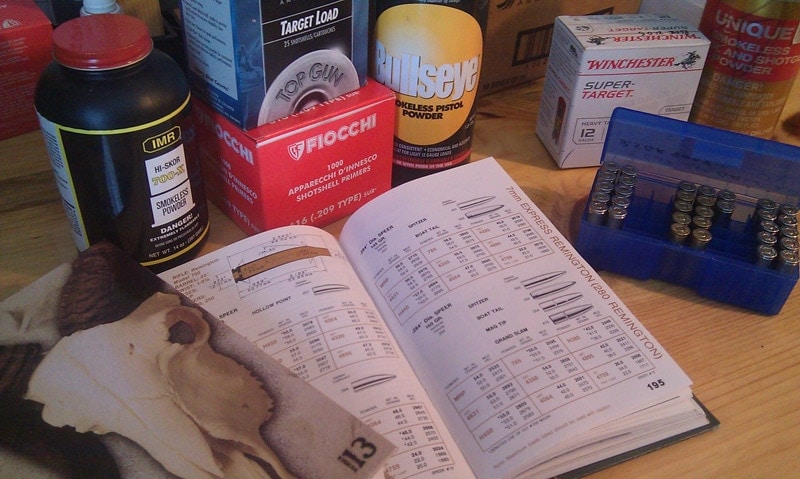 1. Smokeless powder does not perform as well in the cold: At least, partly true

We can qualify this statement to say with certainty that “certain” powders do not handle frigid conditions as well as others.  While I can’t make the argument for metallic cartridges, I can say that my trap loads do not shoot as well when forgotten in a freezing vehicle. My winter trap team went so far as to leave a box of Green Dot loads in the truck for several sub-zero days before running them through the chrono and on the patterning board.  While the results were neither startlingly low nor blown, they were nonetheless negatively skewed from the baseline tests taken with the same recipe in summer.  The decrease in performance should not be enough to cause a loss of birds, though it sounds like a viable excuse (I admit to enjoying good excuses for lost birds).  It would stand to rise, nonetheless, that velocities achieved with most powders would be at least somewhat lower in the naturally more dense winter air.  If a powder creates less pressure in the cold, lower velocity is the general result.  Whether the decrease in velocity is due to the bullet or shot’s physical reaction to dense air remains for debate.

It’s also important to note that modern powders, as opposed to old timers like cordite, are much more stable at a range of temperatures, both significantly high and low. The fact remains that all loads will react differently under different circumstances, not to mention the myriad of other factors to consider involving the firearm itself.  If concerns remain about a certain powder’s capabilities in extreme conditions, do what meticulous reloaders do best — brave the weather with some fresh loads and head out to the range with a chrono.

2. Factory ammo is more reliable and more accurate than reloads: False, with exceptions

“Factory will outshoot reloads every time. Handloads are not reliable.”  I’ve heard statements like this from many folks over the years, usually defensively and always from non-reloaders.  It is very true that factory ammo has improved drastically over the years, and today’s factory ammo is far superior in both accuracy and reliability to that available 40+ years ago, especially the match grade varieties.  Still, in my reloader’s brain, the majority of factory ammo is no match for meticulous handloads — especially when custom tailored.  Factory tolerances are naturally greater than those of a meticulous handloader, not to mention that handloaders have the unmatchable benefit of being able to tune loads to specific guns with a mind to headspace, rifling and all things affecting accuracy. 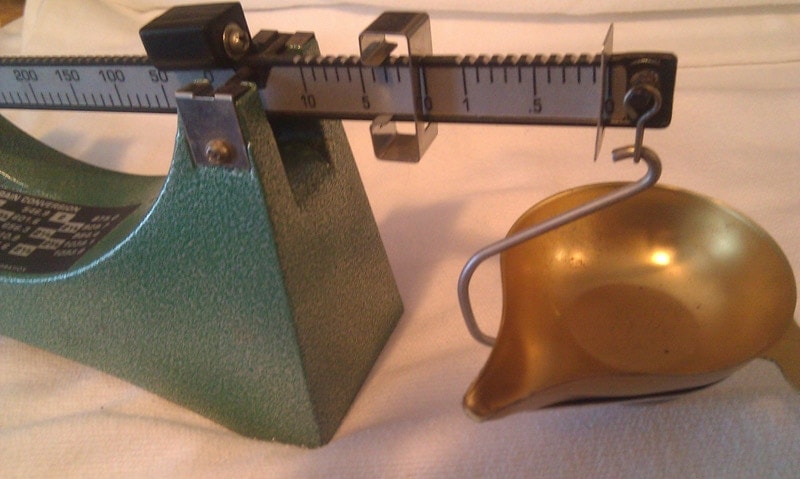 While the bottom line remains that reloaded ammo is only as reliable and accurate as the individual reloader, it’s safe to say that all good reloaders are meticulous about their business.  See how many (read, few) factory ammo brands are on the benches of non-sponsored competitive and long-range shooters.  At the Grand American trap shoot, competitors must use new factory ammo for all handicap shooting to negate any (dis)advantages.

Don’t get me wrong.  Factory ammo has its place, and I have plenty of my favorite brands on hand.  However, the same make and model of gun will oftentimes favor different flavors of ammo, and this simply cannot be afforded for by the ammunition companies.

3. Reloaders storing powder are creating a fire and explosive hazard in their homes: False

The key here is drawing the line between smokeless and black powders.  Because of its more volatile and explosive tendencies, many cities limit the storage of black powder to certain light poundages.  The majority of reloaders, however, are much more apt to stockpile smokeless powder.  When kept in its approved containers, smokeless powder is surprisingly stable.  No matter what nonbelievers argue, smokeless powder does not explode.  However, it does burn very rapidly, producing gasses and pressures in tightly confined spaces, ala a rifle cartridge inside a barrel.  While smokeless powder is not some villain that will jump up and independently ignite a house blaze, it can noticeably accelerate a fire if too much powder is stockpiled in one location.  Hoarders beware.  Average reloaders with a little common sense will be fine.  If nothing else, this myth is a reminder that all prudent reloaders keep a fire extinguisher near the loading bench for any emergencies that hopefully never arise.

4. The higher the shotshell load velocity, the better the load: False

First, we should qualify that “the better load” means faster loads hitting with more velocity and thus theoretically smash targets with more authority.  While this myth is true to a point, it becomes incorrect quickly as overloaded rounds can very noticeably distort shot patterns.  If you don’t believe me, pump up your favorite load — within safe parameters of course — and head out to the patterning board.  Just as metallic cartridge loaders may tinker with rounds for a particular gun, I have a sweet load that my trap gun loves and patterns best with the chokes I prefer.  While that load only clocks around 1,275 fps, it is plenty fast to bust birds.  The ones I miss have nothing to do with the load, and everything to do with operator error.  Yet, I shoot with plenty of fellows who believe that by juicing up their loads to say 1,450-1,500 fps, they’ll get on the target faster, with more power, and won’t have to account for lead.  While that is true to a point, for the most part the shooter must deal with increased pressure and recoil as a substitute to utilizing proper shooting mechanics on moving targets.  If you feel the need for speed, realize that just because it’s a safe load does not mean it will be a productive load.  Sure, you want your hunting charges to be as deadly — and fast — as possible, but make sure the pattern is not skewed by performance.

Round pellets by nature are just not that aerodynamic, though sometimes an overly fast load will hold together better at closer range — say skeet distances — while it will scatter at longer.  True to the reloader’s creed of testing and re-testing on the range, this one dictates the same.  Jack up your load, but be sure to test it at the board with the choke you will use and at the distance you will shoot.  And realize that every gain comes with a trade-off.  Is the increase in recoil worth the speed?  Once the pattern blows, the point is moot.

Sometimes myths are true, and for the cautious among us, this is no exception.  Many tales circulate the reloading community involving vacuum cleaners exploding while sucking up spilled powder or wayward primers.  Can this really cause damage, or worse, personal injury?  The answer is usually no, but there’s enough truth to this myth that I prefer not to vacuum around my loading bench.  While primers and powder react differently to mistreatment, it’s better to err on the side of gentle caution.

Though I did not witness these events first hand, one friend blew the bag off his old-fashioned cleaner and another gun-shop owner had a similar event with a few unknowingly spilled primers from the shelf.  Granted, no serious damage was done other than a sudden dust storm and pale-faced men.  I’ve never encountered a primer detonating during the reloading process, and I would rather not have one go off during cleanup. 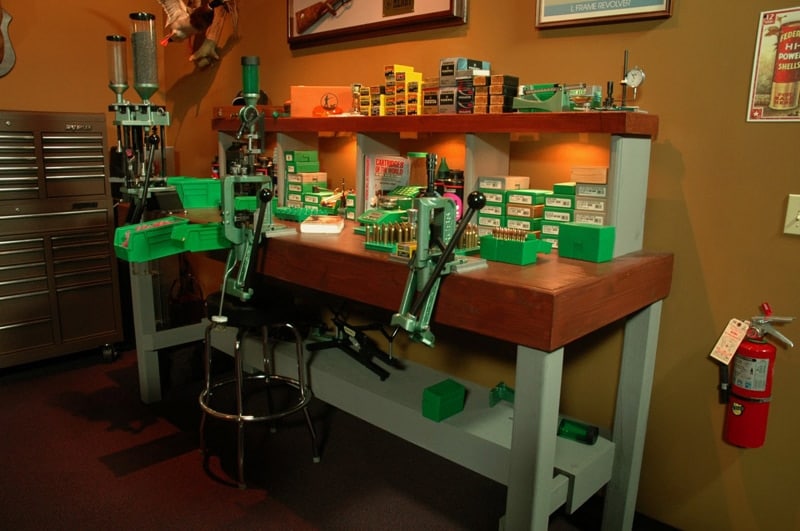 As for loose powder, I’ve neither tried — nor heard of — any accidents with the vacuum.  One group did a test to see if a static spark would ignite a very small amount black powder with surprisingly unremarkable results.  That aside, I’d rather not gamble whether a spark from the Hoover would cause a smokeless powder reaction.

The simplest solution is avoiding shaggy carpet around a loading bench because things get lost in the knap — including small pistol primers.  On a side note, vacuums make quite a racket and do not enjoy digesting shot pellets. There are enough things to treat with caution in the loading process that I just don’t want to add “cleanup” to the list of potential hazards.

This is a double-edged sword.  Like many, I got into reloading because I convinced myself it would save money in the long run.  That may still be true, but the “run” is getting longer, not because reloading isn’t cost-efficient, but because I keep buying new components and toys for the loading bench.  Once the initial investment of accumulation is over, a high-volume shooter will certainly come out ahead in the numbers game, especially those who stashed metal casings and the like before they became more valuable than gold bouillon.  When pricing actual components per box of ammo loaded (especially for spent-brass/hull scroungers like myself) it is very possible to load for half, or sometime less than half, the cost of factory ammo.

Some reload because they like to shoot a lot, whereas others shoot a lot because they reload.  The funniest part of this myth is that the most avid reloaders — myself included — shoot more with all the load testing because they do reload.  It’s a vicious hamster-in-the-wheel trick, but we reloaders are passionate about it and become better shooters in the process.

Sometimes the amount of B.S. floating around reloading circles is astonishing.  For instance, I’ve come to realize that I will most likely not die a sudden death of lead poisoning from handling cast bullets.  Just as shooters reload for as many reasons as there are types of reloading devices, some myths are true and others are old wives (or old reloaders) tales. No matter.  Just ensure that safety always takes priority at the loading bench.  Load often, use common sense, and enjoy a great hobby that makes better, more attentive shooters of us all.