Americans love outlaws.  No two ways about it.  We have an appetite for the miscreants who write their own rules.  But when it comes to outlaws that take on behemoth institutions, our appetite becomes insatiable.  The recent events surrounding Christopher Dorner are a good example.  But it as old as America itself.  And probably older. 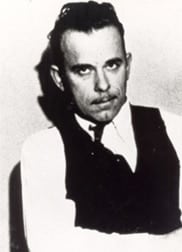 John Dillinger is the perfect example.   Many still see Dillinger as a ruthless Robin Hood figure who worked his way through the Great Depression behind the barrel of a gun.  He robbed banks.  When supplies like guns and ammunition ran low, he and his gang would knock over a police station and pilfer what they wanted.

Dillinger is one of those legendary figures that jails couldn’t hold.  It was his infamy, and the fear he instilled in law enforcement and bankers, that contributed to J. Edgar Hoover’s creation of the FBI.  In 1933 and 1934 Dillinger and his cohorts terrorized the Chicago area.

Though Dillinger was never convicted of murder, his band is believed to be responsible for the deaths of 13 lawmen.

And rumors of his demise didn’t end when he was gunned down outside of the Biograph Theater in Chicago on July 22, 1934.  Like Billy the Kid before, and Elvis after, Dillinger is rumored to have lived on. Dillinger’s Gang at the museum.

So it shouldn’t be surprising that there’s a Dillinger Day celebrated annually in John Dillinger’s old stomping grounds in northern Indiana.

The Indiana Welcome Center in Hammond will be celebrating the Dillinger legacy at their John Dillinger Museum on Saturday, March 2.  The even will run from 10 a.m. until 4 p.m. and is free.  They’ll have Dillinger artifacts on display, as well as interactive exhibits and film screenings.

And before we all jump to the conclusion that this is all about the perverse hero worship of a notorious bad man, remember the Museum’s motto.  Crime Doesn’t Pay.  To remind everyone of that mantra, Lake County and Porter County Sheriffs’ Departments will be on hand “to answer questions about their careers and how the criminal justice field has advanced over time.” 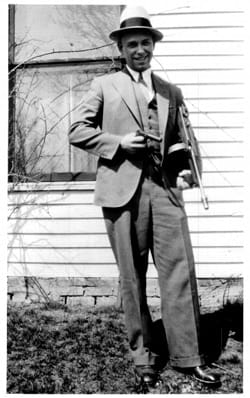 Dillinger posing with his wooden Colt, and a steel Thompson he borrowed from the police.

For Fans of Historical Guns

On display will be an infamous wooden Colt .38 that Dillinger used during his escape from the Crown Point jail in March of 1934.  The jail was supposed to be escape proof, but wasn’t.  Not even with the extra guards that had been posted there.

Also on display will be several of the Thompsons the Dillinger gang used in their robberies.  While these historic firearms will be a central feature of the exhibit, they’re not exactly rare.  Dillinger had a habit of collecting Thompsons.

But the wooden gun is a real treasure.  How does the nation’s most wanted man get enough wood, not to mention the tools, needed to craft a faux heater? And why didn’t anyone see him doing it?

The  museum will feature a video about the mystery of the wooden gun.   Visitors may watch the clip inside the In-Vision Theater every half hour during the event.

For more information on the event, or on the John Dillinger Museum, visit the museum’s web page, or SouthShoreCVAa.com.  And for those of you who can’t make the exhibit, get out on the web and revel in the reason why we are all obliged to obey the rules and regulations of the1934 National Firearms Act.