Earlier this week, we ran an article about the unique historical role of the High Standard HDM, an integrally suppressed (and exceptionally long) .22LR pistol used in World War II and the Cold War.

But while we’re reveling in the quirky accoutrements of America’s covert past, we can’t forget that High Standard is still making guns.  And their .22s are just as dead-on today as they were through the heart of the twentieth century. 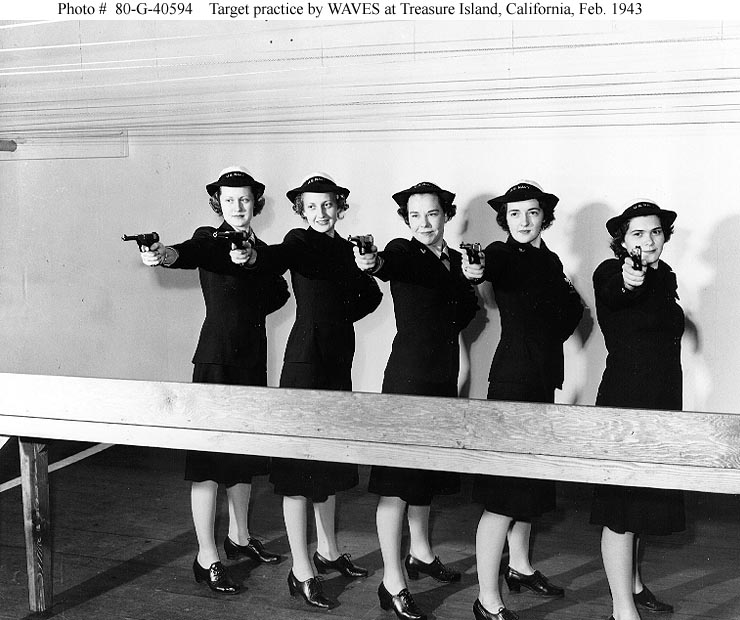 WAVES in 1943 practicing with HS Pistols

High Standard began back in 1926 as a parts supplier serving the other New England gun manufacturers (a role they played through WW II).

But the times were changing, and Colt was seeing tremendous success from their rimfire automatics.  Many others followed suit, including High Standard in 1932.

High Standard is remembered in part because of a subtle change in their grip angle.  They moved away from the Luger‘s steep grip angle and modeled their .22s’ grip angle and controls on Colt’s own 1911.

In a time when the Luger had some decidedly negative associations, this move might be considered most patriotic.

A New High Standard that mirrors a 1911’s controls and grip angle.

And these guns were winning competitions, even the Olympic Rapid Fire Competition in 1952 and 1960.

But that was the height of High Standard’s fame.  So what happened?  Were they undercut by the competition?

Ruger’s rimfires owe a debt to High Standard.  And their appearance in the second half of the century had to have eroded sales.  High Standard was also making guns under other brand names, including J.C. Higgins (which was the house brand at Sears), so some speculate that they had spread themselves too thin.

The company changed hands a number of times after 1968 and looked like it was going down for the last time, when it resurfaced again in 1993 in Texas.  Alive and vibrant.

The new High Standard has diversified its offerings yet again.  Today the company is still making their venerable rimfires (which have a decidedly 1970s look about them).   They’re available in numerous barrel configurations and finishes, and are respected guns with a devoted following.

Note the take down button that makes disassembly easy. When’s Ruger going to borrow that feature?

But how can High Standard compete with retro rimfires in this market, where a company like Ruger has almost complete market saturation?

While High Standard is remembered for their rimfires, they made other guns, including a bullpup shotgun.  They’re making 1911s, and re-branding some less expensive imports from Armscor.    But their recent efforts are aimed at the modern sporting rifle market.

The forums are full of people asking the same sort of question: “Ever heard of a High Standard AR-15?”

And the responses all attest to solidly built, no frills ARs that will eat anything, work under the harshest conditions, and come back for more.  The only complaint seems to be visible tool marks.  And we’ll admit, a High Standard AR-15 isn’t a looker.  It’s no Turnbull.  But it shoots straight.

Back when the AR-15 was readily available, a High Standard was selling for $700, give or take.  Precisely because so few of us had ever heard of the brand being associated with AR-15s, they were often overlooked.  And like many used AR-15s, they didn’t hold their value well and could be bought second-hand for much less.

Yet there’s no indication that they’re not solidly built ARs.  And now, in this ridiculous market, High Standard Lowers are selling for the price of a rifle, and a complete rifle will sell for more than twice the suggested retail price.

And Speaking of the Cold War

High Standard makes the AR-15s, but they also make some AKs under the Interarms name.  The Interarms guns are imported (mostly as parts kits) and rebuilt to meet 922r compliance.  If there is a fan base more devoted to the minutia of a firearm than the AR aficionados, it is the die-hard AK community.

An Interarms under-folder with Polish roots.

And their consensus seems to be that Interarms AKs are great shooters that fall somewhere just south of Arsenal’s Saiga line in terms of reputation.  Before the new-normal, Interarms AKs were selling for $600 give or take.   Not anymore.  Through the roof.  Sold out. 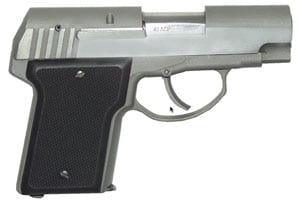 And Then There’s AMT

If you have to have a High Standard, there are options.  There are still some Auto-Mag AMT pistols available.  These are known to be solid guns and the AMT line had a larger share of the market in the pre-polymer days.

Over the years, AMT pistols have been chambered in everything from .22LR to .400 Corbon.  The most popular model is the Backup.

And again, it isn’t pretty.  But it works.  Yet these solid stainless pocket guns are hardly ever mentioned in conversations about concealed carry.

High Standard is still making guns.  Perhaps the single biggest criticism we could make is that they don’t seem to be making any new guns.  And by new, I mean innovative.  Their guns, even their ARs and AKs, are products of the 1970s.

But that same philosophical concept might better be interpreted as a commitment to tradition.  The new High Standard is keeping the venerable old company alive by crafting well built guns that will speak to many shooters’ nostalgia.