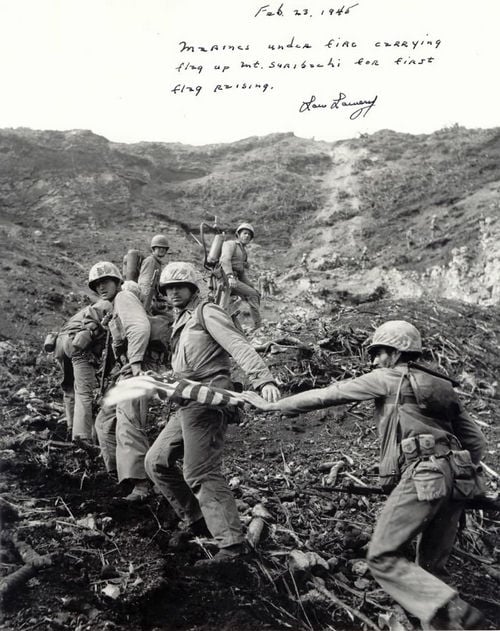 In a Sept. 17, 1947 letter, U.S. Marine Corps Sgt. Lou Lowery wrote, “You fellows did all the dirty work and the ones who were on Rosenthal’s picture got all the credit.”  The letter’s recipient, Pfc. Raymond Jacobs, was among the Marines who raised the first flag atop Iwo Jimo, which Lowery photographed.  However, it was a second flag raising that occurred moments later, caught on film by Joe Rosenthal, that would capture the world’s imagination.  His Pulitzer Prize winning photograph would become one of the most iconic symbols of the American determination in World War II and immortalize its subjects in memories of Americans for generations to come.

As part of the original plan, Marines would secure Mount Suribachi first before advancing northeast throughout the island.  After four days of fighting, on Feb. 23, 1945 the first patrol was sent up the volcanic sands towards the top of Mount Suribachi.  Finding little resistance, the patrol secured the highest point of Iwo Jima and the Marines called reinforcements to follow their lead.  On the second patrol, Lowery, a Marine Corps photographer, accompanied the leathernecks (from 2nd Battalion, 28th Marines, 5th Marine Division, E and F Company) to the top of the volcano.  With instructions from Lt. Col. Chandler Johnson to raise a 48 star 54 x 28 inch American Flag, the patrol secured a Japanese water pipe and hoisted the first flag atop Iwo Jima.  Celebration could be heard from the Marines down on the beaches in unison with horns from ships on the water. Lowery documented this: 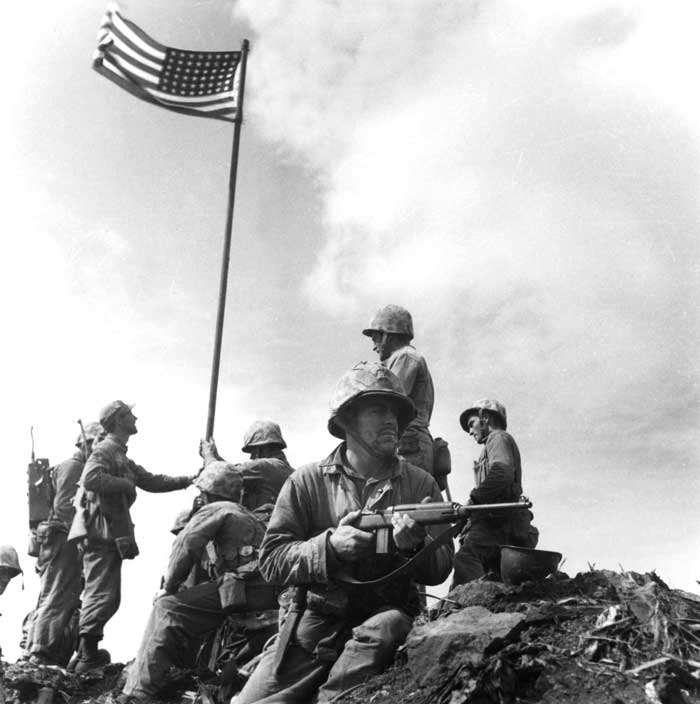 When Navy Secretary James Forrestal landed on the beach he was taken by the fervor of the moment and requested the flag as a souvenir, so Johnson sent up a second larger flag that was 48 stars and 90 x 56 inches to ensure the first flag raised above Iwo Jima didn’t leave the custody of his battalion.  While passing Lowery on his way down from the first flag raising, Rosenthal was informed there were still images to be taken on top of the volcano.

Upon realizing the flags were about to be switched, Rosenthal attempted to capture this trade-off in an image, but failed.  However, while setting up for his intended shot, Rosenthal was able to snap the famous photograph we all know today.  Not thinking anything of the image he had just taken and perhaps discouraged he had missed the flag transfer, Rosenthal gathered the flag raisers for a group shot under the newly raised flag to make sure he had something to send the Associated Press. 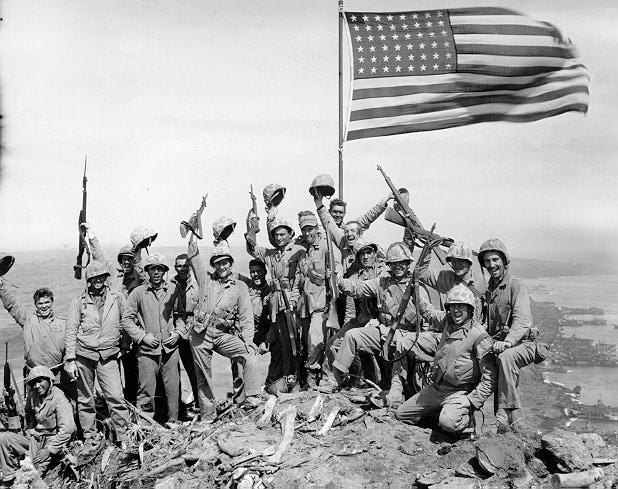 It was not until days later that Rosenthal heard anything of his photograph and when receiving congratulations on his work from the AP, Rosenthal assumed they were referring to the group shot he had taken.  Little did he know that the very photo he had overlooked was about to change his life and those of the troops featured in the photograph.  Widely considered one of the most famous and reproduced photographs ever, his image went on to become a symbol of both the Marines and the American war effort.  In addition to its long-term cultural ramifications, the photograph’s more immediate economic potential was recognized by President Franklin Roosevelt, who promptly ordered the three surviving flag raisers to return home and participate in a bond drive. 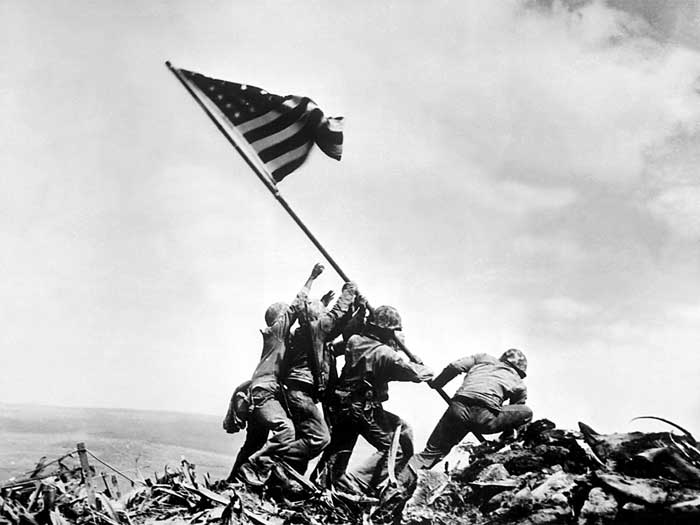 Despite their success of helping sell $26.3 billion in war bonds, the surviving Marines’ return to the states was not without controversy.  Confusion surrounding the pictured men’s identity (the names of the Marines featured in the famous photograph were purposely omitted and modified) was complicated further by complex battlefield allegiances.  Tensions mounted so high that two of the soldiers in Rosenthal’s image, Ira Hayes and Rene Gagnon, reportedly exchanged death threats.  Additionally, Rosenthal constantly faced accusations of staging the shot.  Years later, he would respond to such accusations by simply stating that he just happened to photograph the second flag raising.  As for Lowery, it was official military policy to deny any claims of a first flag raising.  It was not until 1947 when Lowery published his photographs in Leatherneck Magazine that the true story of the first flag raising atop Mount Suribachi was told.

“You fellows did all the dirty work and the ones who were on Rosenthal’s picture got all the credit.”

One might assume Lowery harbored resentment towards Rosenthal for the subsequent fame and fortune from a shot he had already documented.  But being a Marine first, it is clear Lowery only cared for his fellow servicemen that were with him on Mount Suribachi.  Lowery’s only regret was that the Marines involved in the first flag raising over Iwo Jima were never properly recognized.