An Army combat veteran with over 12 years of service is now facing weapons-related felony charges for possessing five empty 30-round magazines.  If convicted on all five counts, one for each mag, the former soldier could spend up to seven years behind bars. 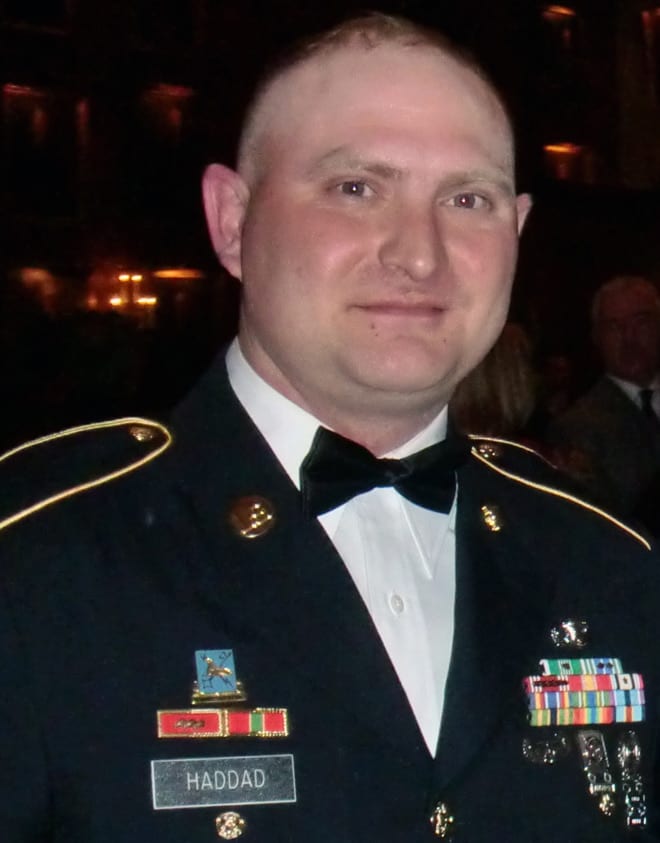 In January, Nate Haddad of Watertown was parked on the side of the road waiting to meet someone who was interested in purchasing his magazines, which were built for an AR-15.

Although magazines over 10 rounds had been banned in New York since 1994, there had been a grandfather clause for mags made prior to that year.  Haddad, who claimed to have purchased them at an Army surplus store, believed he was in possession of lawful, pre-ban mags.

When police officers showed up on the scene (it’s not exactly clear why they stopped), they disagreed with Haddad about the production year the mags.  They arrested Haddad and charged him with five counts of Criminal Possession of a Weapon in the Third Degree, a Class D Felony.

“I certainly did not think I was committing a felony crime by having these [mags],” Haddad told local news affiliate WGRZ-TV.

“Even if I took that deal I would still be branded as a criminal, and I don’t think I should be,” Haddad said.

“At this point, I can’t say for sure how doing so might impact my access to Fort Drum,” he continued.  “If it were to be restricted, then I would likely lose my job.”  Haddad, who injured his shoulder during Special Forces training in 2010, now holds a civilian job at Fort Drum.

Given this tough decision, Haddad is now gearing up for a protracted legal battle in court.  As such, his Brother has created a website where individuals can donate money to help pay for the cost of Haddad’s legal bills.

In a passionate plea to potential donors, Haddad’s brother Michael Haddad explains why supporting his brother’s fight is important.

My brother, Nathan Haddad, is not only a decorated combat veteran, but models the character qualities that make him the kind of man who goes out of his way to help his fellow man and other veterans.  He would not knowingly do anything against the law, compromise his faith and deeply rooted principles, or jeopardize his rights guaranteed by our Constitution.

On Sunday January 6th he was arrested for possession of five, 30 round empty magazines that he believed were pre-ban magazines when he purchased them.  Meanwhile, in Washington D.C, David Gregory of NBC news doesn’t even get a slap on the hand for a similar offense when he held up one on National TV during a newscast.

My brother was medically discharged after 12 years of service and does not have the funds necessary needed for Attorney fees, and unless he has adequate defense and gets his charges reduced, he is not going to get the same treatment that David Gregory, a rich, white, liberal, media mogul got.  This is a travesty!

Please, anybody and everybody, would you be willing to donate to our fund to help support my brother?   Below are some additional websites that will attest to the reason why my brother is deserving of your help. Thank you very much!

In response to the outpour of support, Haddad told WGRZ-TV, “I am absolutely touched by the generosity of people who have donated anywhere from $5 to even $300.”

Beyond the scope of Haddad’s personal plight, New Yorkers should view this as a cautionary tale.  Following the passage of New York Gov. Andrew Cuomo’s gun control package, known as the NY SAFE Act, it will soon be illegal for anyone to possess a magazine holding more than seven rounds.

What’s more, there is no grandfather clause.  Consequently, it stands to reason that many otherwise law-abiding New Yorkers will be slapped with criminal chargers for possessing what is currently considered legal property.

Bans possession of any “high-capacity magazines” regardless of when they were made or sold. The maximum capacity for a detachable magazine is reduced from ten rounds to seven. Magazines owned before passage of the SAFE Act able to hold seven to ten rounds can be possessed, but cannot be loaded with more than seven rounds. .22 caliber tubular magazines are exempt from this limit. Previously legal “pre-1994-ban” magazines with a capacity of 30 rounds are not exempt, and must be sold within one year to an out-of-state resident or turned into local authorities. The magazine limit takes effect April 15, 2013.