The 21-year-old son of eastern European parents in Houston, Texas opened fire on three gunmen after they forced their way into the family’s home, killing one intruder and saving his parents in the process Friday night. 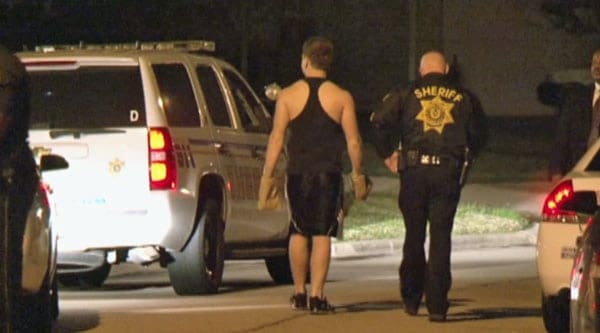 The 21-year-old man who shot and killed an intruder trying to subdue his mother walks with a Harris County Sheriff’s deputy. (Photo credit: KHOU)

Around 8 o’clock the doorbell rang at the family’s home in Harris County. While the mother was baking a cake, the father went to get the door. He peered through the peephole and saw three young men on the other side. Thinking they were friends with his son, he opened the door. As he cracked the door just a little bit, one of the young men pushed his way inside and shoved a pistol in the father’s face, Harris County Sheriff’s deputy Sgt. Greg Pinkins told local media.

The mother told the Houston ABC affiliate that the father started yelling, “Go to the bedroom and get the gun,” as he was forced to the ground. Suspects tried to bind his hands with duct tape, the Houston Chronicle reported.

The mother and son did as his father instructed. They ran to the bedroom to grab the gun, which was stored under the bed. One of the men was chasing the mother and grabbing at her while yelling, “I’m not going to hurt you. Lay down!” The mother and the intruder made it to the bedroom, but the son was already there with the gun in hand. He fired several shots, and the suspect collapsed and died right there beside the bed on the carpet.

“I just hear a couple of times, ‘boom, boom, boom.’ One young life is lost,” the dad said.

The whole incident is said to have lasted about a minute or so.

Before the intruders could restrain the parents or ransack the house, the other two suspects fled and witnesses who saw them running down the street said they escaped in a Ford Explorer.

Sheriff’s deputies quickly responded, and stopped two men who matched the descriptions of the two fleeing suspects. They were taken in for questioning. The suspects are said to be in their 20s, and the deceased is also said to be in his 20s.

Authorities said the father owned the gun that was used to shoot the suspect. They said investigators are still trying to determine the reasons the three men decided to invade that particular home. The family said they had never seen the men before.

The son will not be charged for the shooting.