The State of Colorado Part I: Denver Day of Resistance (VIDEO) 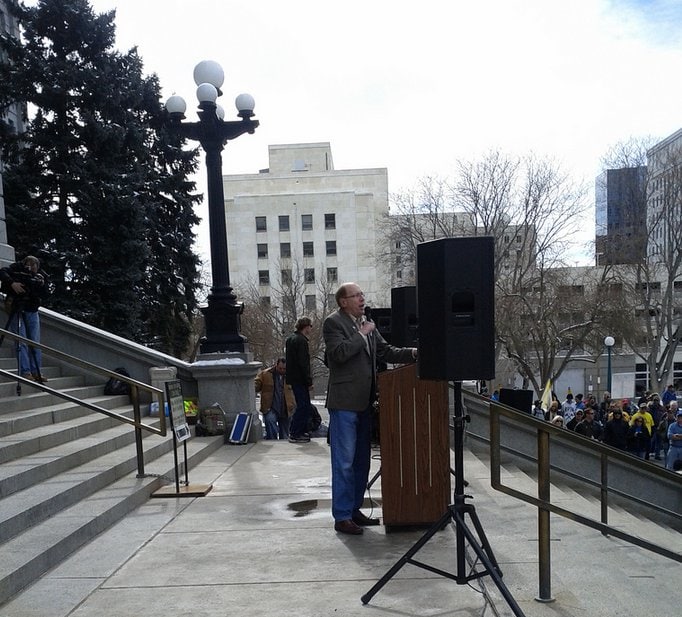 Protesters from across the state of Colorado scaled the steps up to the capitol building in Denver, rallying against the proposed gun control measures legislators will be voting on later this year. It was called the Denver Day of Resistance.

At least 400 people made it to the rally (protest organizers told us 500), and passers-by showed their support by honking regularly as they drove past the crowd.

There was no counter-protest, there was no conflict with the police, just a few hundred people cheering, singing, praying and showing their support for gun rights. It was one “hallelujah” short of preaching to the choir, although there were plenty of “amens.”

The crowd was made up of a blend of Colorado residents of all races and had all of the hallmarks of a proper gun rights protest. There was the dude dressed as the American flag, a couple wearing Civil War-era outfits, vets in and out of uniform, but it was mostly regular people there with their families, with their boyfriends and girlfriends, and people showing up by themselves to show support.

There were plenty of homemade signs, megaphones and snowballs — the west face of the capitol lawn was torn up by kids playing with each other — and speakers of all types, including Senators Vicky Marble and Lori Slaine and Mike Holler, author of “The Constitution Made Easy,” who was signing his books when he wasn’t leading the protest. One speaker, Evan Todd, is a Columbine survivor.

At one point Slaine led all the women of the crowd to the capitol steps to a wave of cheers and applause, after slamming the idea that girls shouldn’t be allowed to arm themselves against attackers on campuses.

Matt Arnold, director of Clear the Bench Colorado, an organization that keeps tabs on Colorado judges, systematically argued against each of the bills, saying that mandatory fee-based background checks was the equivalent of a poll tax and slammed the bills for violating both the Second Amendment and the Colorado Constitution.

The rally started early and ran longer than scheduled, with people from the audience filing in line to get behind the mic after the formal speakers had finished, and music blasting in between speakers keeping the crowd going.

People in the audience said it was a success, with one person saying, “This is what people need to see. Gun owners are everybody, they’re not nuts, they’re these people, they’re young people and women and college students.” The man left to go flirt with a young woman at the protest by herself before we could get his name.

Protest organizer Dave Green commented on the group’s Facebook page afterwards, “Thanks to every last person at the rally today, we could not be happier with how every thing went! The passion and pride for what makes our country great was on full display today, personally I would not have chosen to be anywhere else but with the people I was with today. So thank you to all of you!”

Legislators have not yet set a date on when they will vote on the proposed legislation. Several of the speakers said that Colorado was a battleground for the whole country, and that there was a lot of pressure from gun control advocates like Mayors Against Illegal Guns and even the White House to pass the laws.

In any case, this may very well not be the last protest of its kind.

See the Denver Day of Resistance in photos.