Earlier this year, Bushmaster announced at SHOT Show that they would be offering several of their rifles configured with Magpul furniture, specifically the new MOE fixed rifle-length buttstock.

These rifles will expand on Bushmaster’s higher-end offerings, their Varminter, Predator and 308 Hunter models. The Firearm Blog scored some photos of the newly-reconfigured rifles. 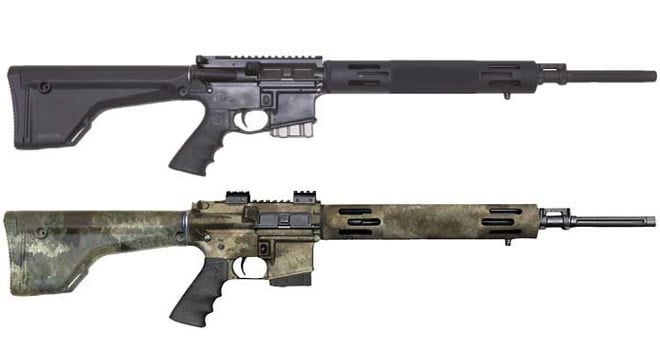 First up is the new Predator, which will be available in three models, basic black, A-TACS camoflage and black with a bullet button for California (not shown). Depending on the finish the standard A2-stocked Predator the MSRP varies between $1,414 and $1,518.

They have extra-heavy fluted barrels with a 1-in-8 rate of twist for heavier bullet stabilization that measure in at 20 inches in length. The barrels are not chrome-lined and have 11-degree target crowns in addition to using free-floating handguards for utmost accuracy. Bushmaster will also be rolling MOE stocks on their Varminter rifles, which will be available in four models, stainless, matte black, black with a bullet button (not shown) and one with A-TACS camo print (also not shown, but the same camo finish as the Varminter above).

The Varminters also have extra-heavy fluted barrels, but they’re longer at 24 inches and made with 1-in-9 twists for light, fast bullets more commonly used for small to medium game and varminting.

Like the Predators, the Varmintors have non-chrome-lined barrels with target crowns and free-floating handguards. These are a hair more expensive, with suggested retail prices starting at $1,430 to $1,534.

Finally, they’re also coming out with a MOE-stocked 308 Hunter. This AR-10-based rifle is chambered for .308 Winchester, offering a lot more energy at the muzzle, in exchange for a little more weight and of course, more recoil.

The MOE-stocked 308 Hunter has a 20-inch barrel, a good compromise between muzzle velocity and maneuverability; like the name says, this is a hunting rifle, although it should have no problems at the range. It too has a target-crowned barrel and free-floating handguard, but has a chrome-lined barrel that gives up a touch of accuracy for longer barrel life.

This is the most expensive of the lot, with an MSRP of $1,685. But like most firearms, we expect them all to sell much closer to $1,100 to $1,400, provided you find a seller who isn’t running wild with their prices.

Really, it’s a small change, but they look pretty fine by us. Of course, if you’re not a fan of Magpul’s fixed stock Bushmaster will still make them with more common A2-style buttstocks.