Houston Man Finds Three Burglars in his House, Restrains Them with Rifle

A Houston homeowner returned home after dropping his wife off at work to find three teenage burglars in his house Feb. 27.  The man was able to get to his rifle and hold the three intruders down until the police arrived.

Randy Magdeleno got home around 8:30 in the morning and found the glass in his back door broken, and then he heard voices inside the house.   A spate of burglaries in Houston has prompted many to take precautions, including Magdeleno who had left a rifle (an unloaded .22LR bolt-action) where he could get to it, just in case. So, Magdeleno quickly grabbed his gun while remaining unnoticed.

“I came around through here in my kitchen,” Magdeleno told Houston’s Channel 11 News.  “It was scary, I didn’t know what I was walking into and hearing people running around inside my house at the same time. I didn’t know if they were carrying weapons around or not.”

He met two of the young men in his living room.  He ordered them to the ground, and the two complied. But they kept glancing upstairs, and Magdeleno suspected that there was at least one more intruder in his home.

“I wanted to keep them calm because I was outnumbered and you know, like I said, at anytime if they felt fear, I know they would have overtaken me,” he said.

While holding the gun on the two suspects, he called his wife, who called police.  When a third man appeared on the stairs, Magdeleno commanded him to the ground also.  And he complied as well. 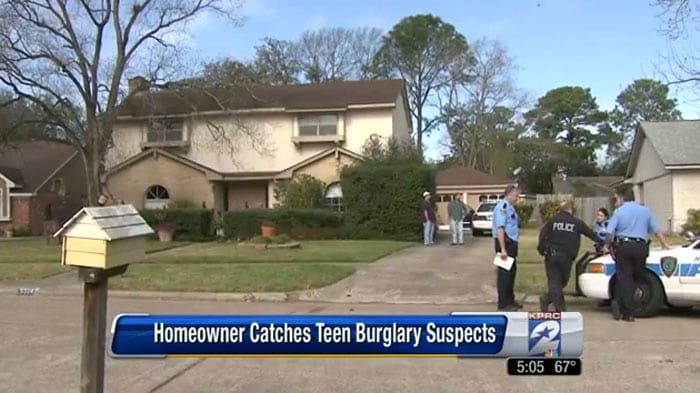 Houston’s Channel 2 News reports that the suspects were just 14 years old.  “When I asked them what they were doing in my house,” Magdeleno told Channel 2, “they said my back door was open and that their dog ran in here and they were coming in after their dog.”

That doesn’t explain the broken window, the lack of a dog, or Magdeleno’s laptop, which was found in a backpack belonging to one of the suspects.  The police say the teens will be charged with burglary.

After, the father of one of the suspects brought his son back to Magdeleno’s house and made his son apologize for his actions.