In order to keep up with current demand, it seems like Caracal has been playing tug and war for the past five months pushing out new product while recalling a defective lot of their pistols. But it’s hard to say which side is pulling harder as the company was hit with yet another issue: a Caracal pistol possibly malfunctioned and hurt somebody. 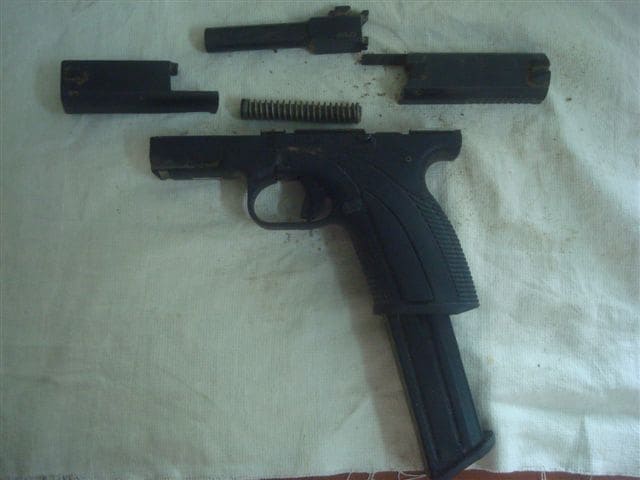 According to forum member kkhan8, part of the slide hit his brother in the face when it broke. While there isn’t suspected longterm damage, he did have to get six stitches. (Photo credit: Pakguns.com)

Caracal issued a statement Feb. 27 saying that they’re currently investigating an incident where the slide of a Caracal Model C pistol “malfunctioned and broke during firing causing personal injury” to the shooter.

While Caracal has not confirmed with Guns.com if this is the specific incident, but a thread was started Feb. 11 in a firearms forum that detailed an incident where a person fired a round out of a Caracal pistol and in turn the slide split in two. As a result the shooter suffered injuries to his face and, according to the post, had to get six stitches.

In the statement Caracal has asked that if you own that specific model that you, “PLEASE DO NOT LOAD OR FIRE THE CARACAL MODEL C PISTOL.” They added that they’ve initiated a voluntary recall. Customers can either wait to see what the investigation reveals before exchanging the pistol, or they could just exchange it now free of charge.

If you do own a Model C pistol and would like to exchange it, just follow these steps:

They added that if you have sold or transferred a Caracal Model C pistol, please contact the customer care center and provide them with the name and contact information for the person to whom you sold it so that Caracal can notify them of this recall.

While this is all certainly bad news, the company has had some good news. They’ve removed a lot of the originally defective pistols from circulation.

After a slew of frustrated consumers commenting on the company’s Facebook page, Caracal released a statement in mid-February informing the public that the first batch of replacement pistols have been received at Caracal’s U.S. facilities and that the company is in the process of sending out a replacement pistol to the customers who requested one, or a refund.

The first recall was announced last October and it applied to Caracal F and C pistols, and affected ones with serial numbers that begin with B, C, F, L, or M. The issue was that the gun could possibly discharge a round if loaded and dropped on a hard surface.

In addition, the company has developed and announced new products such as a new .40-caliber pistol and a carbine.

The company launched in Abu Dhabi in 2007 and first worked with the UAE Armed Forces to develop modern pistol designs. Most recently — like 2011 — the company opened a facility in Alabama to import, distribute and service their U.S. customers.