I think its high-time we cut our Vice President a bit of slack.  Ol’ double barrel Biden’s recent conciliatory gestures regarding the time-honored approach of shooting first, and asking questions later, have brought fundamental issues of home defense to the national stage.  Where they belong. 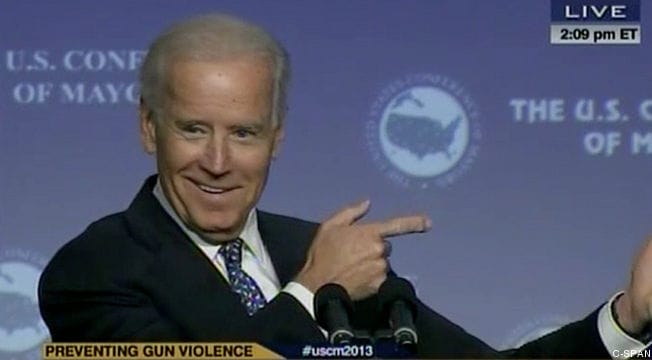 What are we grousing about?  Biden’s advising people to go buy guns, especially women.  And parents!

In a recent interview with Parents magazine, Biden advised standing out on the balcony and firing into the darkness.

It is time we trade in our less-than perfect ARs for guns that need less ammo, and don’t need magazines, or optics, or even sights.  Just point and shoot out into the night from your balcony.

My go-to for bump-in-the-night-type-situations has been a Mossberg 590 equipped with a kick-ass SureFire forend light.  It is a nine shot, and that’s overkill.

With nine in the tube and four in the new SpeedFeed stock I’m trying out, I’m easily equipped for at least six and half attempted break-ins.  I can’t imagine a home defense situation that could require any more than two shells.  Because bad guys are solitary by nature.  They work alone.  And they’re known to be a timid ilk.

Here are five Biden approved scatter guns that will see you through until help can arrive.

The emphasis here is on outdoor.  Very few of us hunt indoors, but it never hurts to be reminded.  Few are aware that hunting indoors is illegal in many states.  That’s why Biden stresses the use of the balcony.  It is still technically part of the home, but not inside, per se.

For a measly $15.99 you can buy a gun that will allow for “realistic outdoor action.”  This model is also “lifelike sounding,” which is all you really need for adequate threat deterrence.  And it has a delightfully retro feel about it with the exposed hammers, which will allow for any number of pithy aphorisms coupled with cinematic hammer cocking gestures.

Looking for something with a bit more class?  Amazon has you covered.  Their Smok’N Barrel Shotgun is a beauty.

Like many shotguns, this one makes realistic shotgun sounds and is replete with a “replicated wood grain stock.”

And the Smok’N Barrel really SmokS.  The gun comes with some “gun smoke oil for smok’n fun!”  And you can kick out the empties after you’ve averted disaster on your balcony, which allows for the hurling of threats and warning that will let aggressors know you mean business.

The Smok’N Barrel is recommended for home defenders aged 8+.  The cost for this level of protection?  $25.29.

This gas-powered double barrel shotgun “blows BBs all over the place.” with its reloadable BB shogun shells. Simply fill the shells with Green Gas, load them with BBs and insert them into the barrel. “Then watch as your target is pelted with a shower of BBs at over 300FPS!”

That’s a serious spanking.  300 feet per second.  It features dual triggers, for those interested in fine tuning their defensive strategies.  And each re-loadable shell holds nine BBs.  So if, and I say if, your first two shots don’t prove your determination to stand between your family and impending doom, you can simply reload.  Gas-and-go!

The Bigtime Hunter is truly a beast.  This dude is straight up plastic.  No fancy synonyms there, and that keeps the price down.  Home defense can be yours for $28.  I promise.

If you do want to aim at something other than the impenetrable blackness that surrounds your balcony, the Bigtime Hunter has sights.  And it comes with four shells (just toss two of them; you only need two).

The best part about the Bigtime Hunter are the light and sound effects.  “[The] tip lights up when you pull the trigger like a real shell was being shot.”  It also comes with some plastic binoculars, if the threats you wish to deter are hard to make out from where you are on the balcony.

5. The Chickory #702 from Chickory Wood Products

But seriously.  BBs?  That’s dangerous.  Flashing lights?  No need.  I’m not sure you even need realistic sounds to strike fear into the hearts of the cowardly miscreants who break into homes.  Sometimes they just need to see that you’re serious.  And that’s where the Chickory #702 is perfect.  Nothing beats s good piece of Chickory.

The Chickory #702 may not have real-life sound effects.  It doesn’t flash or bang.  But it looks intimidating.  And it is made in America, unlike the rest of the guns on this list.  The #702 is an honest example of genuine American craftsmanship, the old fashioned kind that will remind you of a happier times while you are dissuading the riffraff from their nefarious schemes.

The cost?  The website doesn’t say.  But you can’t put a price on peace of mind.

You can even get artillery with two barrels.  And if two isn’t enough, Chiappa will sell you a shotgun with three barrels, or you can get a C.O.P. derringer with four barrels.  A double double, if you will, for those who live in really rough neighborhoods.

Just remember.  Buy a shotgun.  The Vice President told you to.  And have no fear about issuing verbal warnings, or actually identifying target.  Blaze away into the night, and go back to bed.  Rest easy.  The good guys will be there soon.