By 1913, the United States had become an imperial power with newly acquired obligations in Cuba, Puerto Rico, the Philippines, and China. This was in stark contrast to the divided country mired in a costly Civil War just fifty years before. In line with this newly acquired “global player” status, the average US GI of the time period was armed with some of the most groundbreaking firearm designs of the day, many so advanced, they would remain relevant for generations to come.

In the brief but very educational Spanish American War, the US fought in 1898, the US Army found that its .30-caliber Krag-Jørgensen rifle was outclassed by the Spanish Mauser Model 93 rifle. US forces captured several thousands of these rifles during the 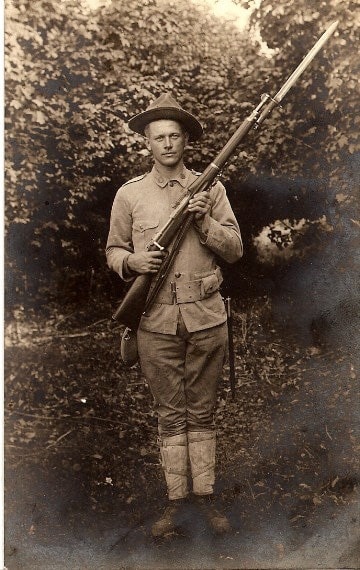 1913 Soldier with Springfield rifle and bayonet.

war and they were promptly shipped back home for study. By 1900, a redesigned Mauser with a few slight differences, was adopted by the US Army and put into production at the Springfield Armory. Formally dubbed the United States Rifle, Caliber .30-06, Model 1903, the rifle was so close to the Mauser design that Mauser Werke sued the Uncle Sam for violating their patents without payment.

The 8.67-pound rifle was 43.9-inches overall with a 24-inch barrel, making it both the shortest and lightest standard issue infantry weapon released to US soldiers up to that time. It fired the newly developed .30-06 round from a five-shot internal magazine that could be rapidly recharged by a spring steel stripper clip. Accurate to 800-yards or more, the hard-hitting ’03 Springfield was popular with the troops of its day.

By 1913, some 373,000 Springfield rifles were held in United States armories and had replaced the Krag as well as the older Trapdoor Springfield rifles in US service. This seemed enough for its 92,000-man professional Army and the 119,087 volunteers in the recently formed National Guard. Little did the military bean counters realize that in just four short years the US Army would balloon in size to nearly 5-million doughboys ready to fight ‘over there’ in World War One.

This goes to show that everything always looks just fine right before a war.

The brainchild of John Moses Browning, the long slide semi-automatic Colt pistol was just reaching American soldiers in numbers by 1913. Accepted in a grueling series of military tests that included firing test pistols into cadavers (imagine that today!), the 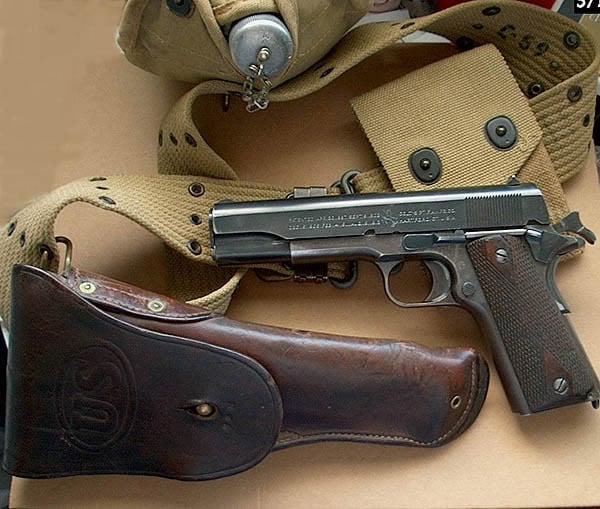 Colt fired a hard-hitting .45ACP round to replace various .38-caliber revolvers, which had performed poorly against Islamic insurgents in the Philippines. By the end of 1913, nearly 50,000 of these pistols had been delivered to not only the Army, but also the Navy and Marine Corps, making it one of the first ‘joint’ combat pistols in US service.

The Colt 1911 (the A1 variant didn’t appear until 1924) was a large framed single-action pistol that used Browning’s short recoil operation. Unlike the revolvers it replaced, it had both a grip safety and a manual safety. Overall weight with an empty magazine was 2.44-pounds. Given a long 5-inch barrel contributing to an 8.25-inch overall length, the 1911 had an impressive sight radius that lent itself to steady and accurate fire at close distances. Reloaded with a single-stacked 7-shot .45ACP magazine, the Colt gave a faster reload than the legacy revolvers with the bonus of a more effective round. Standard practice at the time was to issue the pistol with three magazines, with one loaded and the other two in a covered pouch.

While many think that the first official use of combat shotguns by US troops was in World War One, firearms scholar Bruce Canfield and others have detailed that several hundred 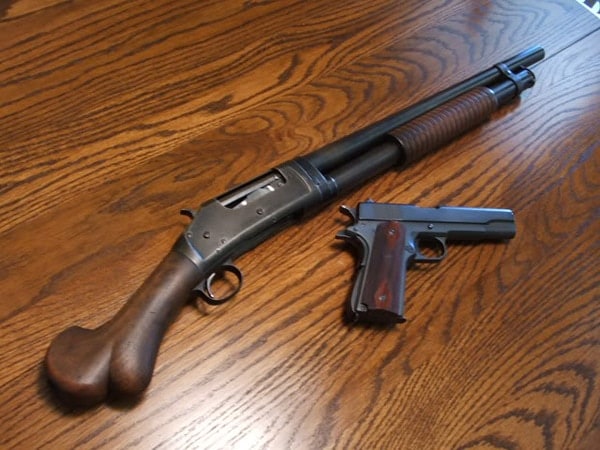 commercial Winchester pump guns were in fact purchased and in use by Uncle Sam’s progeny as early as 1900. These shotguns were issued to soldiers and sailors fighting counter insurgency campaigns in the Philippines as a hedge to help supplement the already mentioned weak .38 revolvers issued at that time. The shotguns used? Winchester Model 1897 12-gauges originally made for commercial sales.

These 8-pound pump action guns, also designed by John Browning, held five shells in a tubular magazine. They were bought in both ‘riot’ configurations with shortened 2-inch cylinder bore barrels, and with standard hunting length barrels that were later “shortened” in the field.

Which goes to show that off-the shelf use of civilian arms by the military is not a new concept. It would not be uncommon for a grunt patrolling a Philippine village overseas to have a chopped barrel 1897 Winnie pump slung over his shoulder, stoked with paper-hulled 00 buckshot that he hoped wasn’t too wet to use.

Classic US martial field arms from a hundred years ago are extremely popular. Until very recently, the CMP sold Springfield 1903s through its program for very affordable prices. As many of these rifles are still ‘out there’ on loan through the US Army’s Ceremonial Rifle Program in dozens of veteran’s groups’ hands, they will continue to pop up in the CMP’s stocks for years to come in small numbers. Outside of this program, the ’03 has 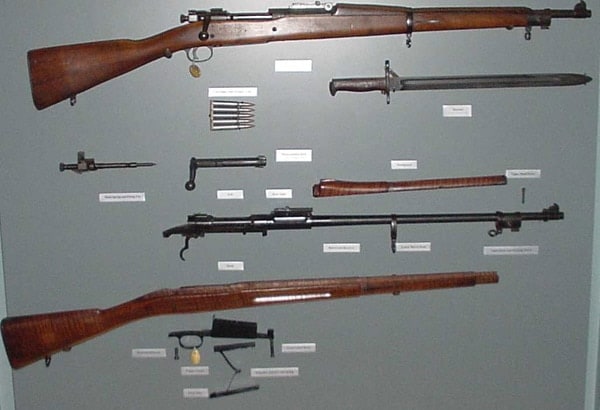 Springfield rifles both assembled and disassembled.

climbed increasingly in value over the past few decades. Just twenty years ago, you could find a nice one for $300 whereas today you are lucky to find one that is WWI-era for three times that amount.

Oddly enough, the pistol adopted for use due to an insurrection in the Philippines is in now, 100 years later, in full production there under the banner of Rock Island, Armscor, High Standard, and others. While new import 1911A1s can be had in “USGI” configurations for around $400, the real deal is a good bit more expensive.

Winchester 1897s are easier to find as more than a million were made for commercial sale.  Worn but otherwise usable ‘civilian’ 97s can still be found online and at gun shows for as little as $400, making them a good investment. Realize that many of the military-marked Trench models made after 1916 are faked, but if you find a real one hang on to it, as they often blow over $5k.

If he knew that, the poor 1913 grunt would have held on to it, wet shells and all.