For the fourth month in a row the FBI National Instant Criminal Background Check System, or NICS, processed more than 2 million background checks in February and broke a handful of records.

These statistics represent the number of background checks performed before a patron can actually buy a gun, but it doesn’t actually translate into final sales or number of guns sold. However, it does give the public an estimate.

In February the FBI reported 2,309,393 background checks making it the third biggest month for checks since NICS was implemented in 1998, and February 2013 also holds three of the biggest weeks for checks ever.

While the 2.3 million checks is a 7 percent decrease from last month, it’s about 32 percent increase from February 2012. 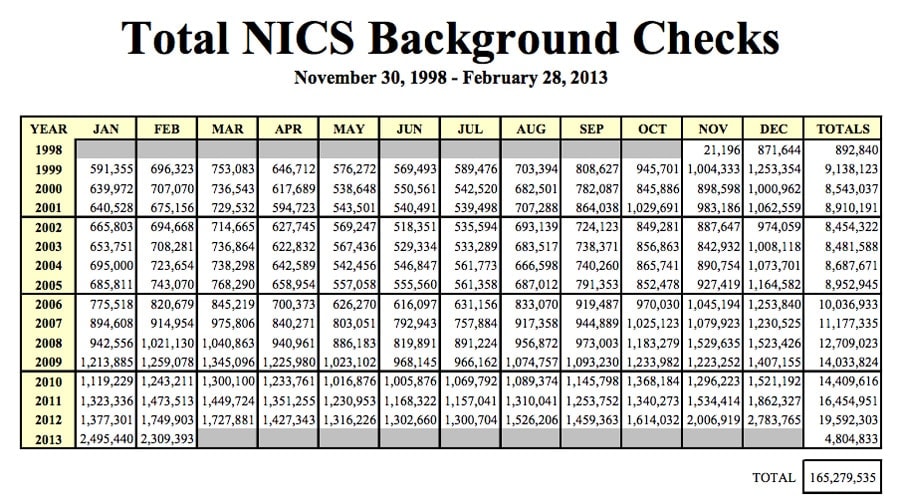 In addition to the overall increased activity, February has been one of the most heated months ever in terms of the gun control debate as lawmakers across the country aim to redefine “assault weapons,” ban high capacity magazines and expand the background check system. On top of that, more than 100 gun companies announced that they would boycott law enforcement agencies in states where strict gun control laws are passed.

As you may have guessed in the states where strict gun control bills are passing or are likely to pass — like in Colorado, Connecticut, New York, Illinois and Maryland —  the number of checks per month has risen steadily since President Barack Obama was re-elected, and more than doubled in some states since he first assumed office.

In Connecticut checks are up 30 percent from October, and 25 percent from February 2009. However, while it’s only a slight increase, Connecticut is also known for already having strict gun control laws.

In Illinois, where gun rights advocates have always had an uphill battle, background checks are up 64 percent from October, and 116 percent from February 2009.

However, in those three states lawmakers were quick about proposing, discussing and voting on gun control bills. In states where lawmakers are seemingly doing everything they can to protect gun rights and even go so far as to encourage gun ownership, background checks are also up.

While this is just a small sample, it makes sense that the states where gun rights are at risk have seen an increase in activity, but in states where there’s little to no risk it makes you wonder what’s really motivating folks.

One could only assume in those states where preserving gun rights is more of a concern that the threat of new federal gun control laws motivates patrons to hit up the gun store, but that’s just a guess.

Another guess is maybe it’s the availability of product that motivates consumers. Say, for example, Connecticut redefines an assault rifle as having one military feature, then a gun company will have to obey the state’s laws and regulations if they want to ship and sell guns there. And if every state has a different definition, then, once again, gun companies will have to alter designs and as a possible result of the change they’ll churn out fewer units.

Or it could be something else entirely.