From time to time, when governments send men (that officially don’t exist) to places they officially never went, said ghostmen are equipped with sanitized weapons, lacking any identifying marks and that can’t be traced back to their country of origin. In the 1960s, when US clandestine mission operators needed a reliable and deniable burp gun for classified missions in Southeast Asia, they reached for the K-Gun.

Produced by Carl Gustav SG for the Swedish Army, in its day the M45 submachine gun was well received and considered the top of the line when it came to compact power. It was designed during World War 2, put into production in 1945 (thus the M45 designation) and labeled Kulsprutepistol. While Sweden was its primary user, several examples were acquired for use by the US government and while in American hands, this long and near-unpronounceable text simply became “the K gun.”

Taking a cue from the STEN and M3 subguns of the WWII-era, the M45 was made primarily from metal stampings to make it as inexpensive and light as possible. Its 8.37-inch rifled barrel and folding rectangular buttstock gave it an overall length of 21.7-inches when collapsed. Its weight, at 7.37-pounds unloaded, is on par with the UZI.

The Kulsprutepistol M45 submachine gun or better known stateside as the “K gun”.

While it may seem heavy, the gun has a great natural balance and exhibits very little muzzle climb. A straight-blowback action weapon that fired from an open bolt, it hummed out NATO standard 9x19mm rounds from a 36-round Suomi-style stick mag at a controllable 600-round per minute cyclic rate. Compared to the subguns of it day: the PPSH41, M3, and STEN, it was a decidedly more reliable and finished design.

Use, overt and covert

The Swedish military had some 300,000 of these brutal little buzz saws constructed for use by their militia-based army. Used by the Swedes often in overseas UN peacekeeping missions, they were issued as late as the 1990s, at which point the design was more than 50 years old. Egypt liked the M45 so much that they bought it and, made locally under the name Port Said, used them often against Israel. 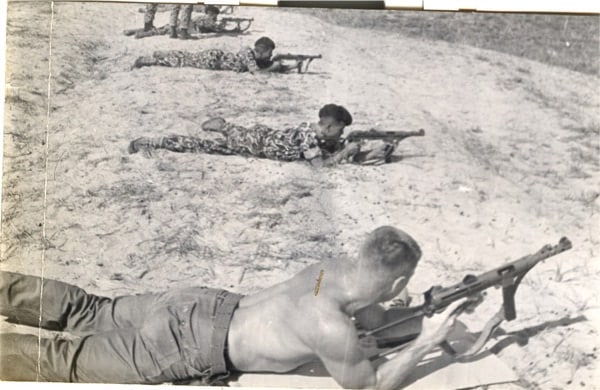 Swedish made K gun in Vietnam.

However, one of the most interesting uses of these guns was by CIA, US Army Special Forces and Navy Seal teams in the Vietnam era. As the US was not officially involved in combat in Laos, Cambodia and mainland China, deniable assets were used for missions in these areas. Whereas standard US arms and ammunition would be a literal smoking gun if recovered, non-standard weapons were acquired for this purpose. At the time, the US military used .45 ACP caliber for their subgun rather than 9mm, a round that was not formally adopted by the DOD until the 1980s. Sweden was not a US ally and even embargoed the sale of arms to US destinations in 1966. This deniability made the K-Gun so attractive when the Cold War got hot but still needed to be quiet.

Covert operators put these guns to fast and deadly use. Green Beret Staff Sergeant Drew Dix, armed with a K-Gun and a sack of mags, led a group of SEALS and irregulars in the liberation of Chau Phu from the Viet Cong, rescuing other indigenous forces and Maggie O’Brien, a female U.S. nurse, for which he was the recipient of the Congressional Medal of Honor.  The body of legendary Green Beret and soldier of fortune Larry Thorne was only identified in 2003 (when found on a Laotian hillside) by the presence of his K-Gun.

The US military and the Navy especially, liked the K-Gun for its special ops units. When Sweden cut off the supply due to embargo in 1966, Smith and Wesson cloned the gun at 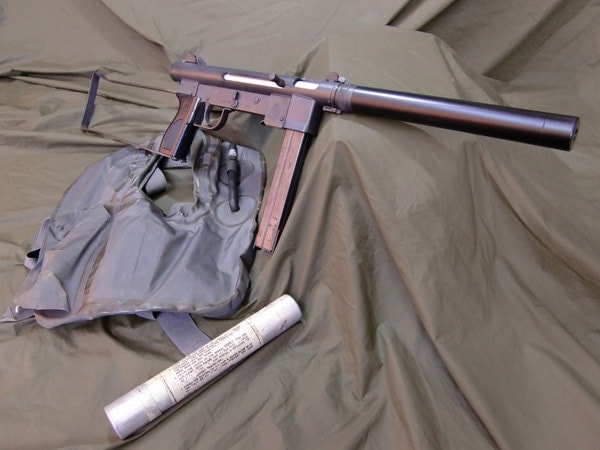 the Navy’s insistence and sold it as the M76 the next year. It took the same magazine but none of the parts were interchangeable with the original to keep things from getting legal. Nonetheless, the M76 remained in production with S&W until 1974 and became popular with a number of 1970s police tactical teams (and thus appears often in many 1970s action movies). It’s these guns that are most often encountered for sale on the Class III market. They are one of the better bargains on the NFA guns, running as low as $6500. 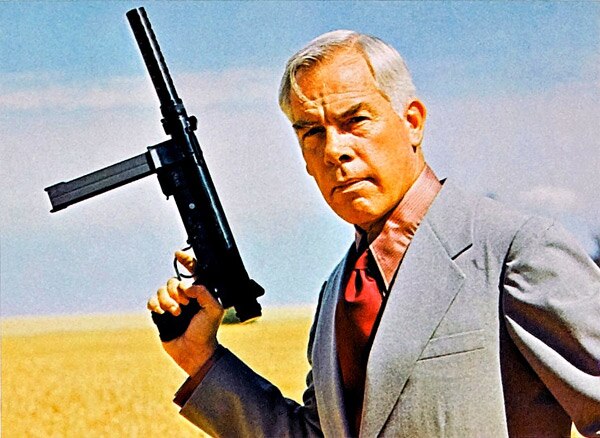 Semi-auto only clones of the S&W76 have also been popular for the past twenty years. These guns use a 16.5-inch barrel to make them a legal carbine-sized rifle. Sold under the name MK-760, SW760 and others by MK Arms (who also made 94 select fire guns), Global Arms, and Special Weapons, they can often be found for as little as $400 in used condition.  Original Swedish military surplus M45s are currently available on the surplus market, demilled per-ATF guidelines, and are available for about the same price that you could build your own.