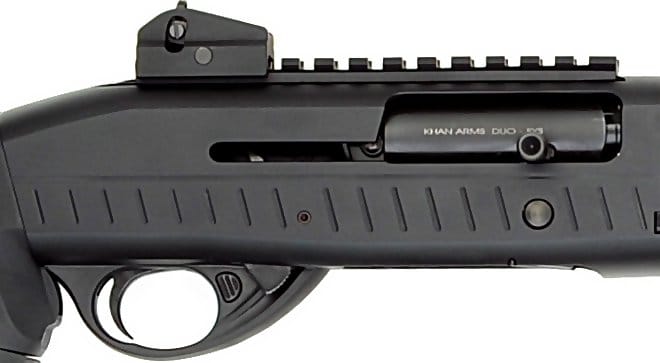 TriStar has just announced a new hybrid pump-action/semi-automatic 12-gauge shotgun called the TEC 12. The TEC 12 uses a selector to switch between the two actions ensuring that the gun cycles every manner of load possible.

The pump-action mode is conventional, but the semi-automatic action is inertia-operated, a cycling system invented at the turn of the 20th century with the Sjögren shotgun. Sjögren and inertia operation fell off the map until 1986 when Benelli modernized it and slapped a patent on it.

Benelli’s inertia-operated shotguns have a long track record of reliability and are well-known to cycle an extremely wide range of loads, from light birdshot to heavy magnum buckshot and slugs.

The TEC 12 goes one step further by squeezing a manual cycling mode, insuring that it will function with all types of ammo, even extremely lightweight exotic shot shells, and in extreme conditions, through mud, sand, ice or anything else that might foul a traditional semi-automatic shotgun.

Otherwise it’s a straight-forward all-purpose shotgun, with a tendency towards tactical. It has a 3-inch chamber for most loads and sports a synthetic pistol grip buttstock. It has a capacity of 5+1 and uses Benelli/Beretta chokes.

The receiver sports a ghost ring rear sight and Picatinny rail for optics and the winged front sight has a fiber-optic insert for easy aiming.

Looking at the TEC 12 might make you think of the Franchi SPAS-12, popularized in movies and video games, but they’re hard to find, expensive and no longer made; the TEC 12 would be a suitable replacement, not to mention costing a whole lot less. The suggested retail price for this shotgun is $689, which means we expect to see these on shelves for $550 to $600, and possibly even less than that.

That’s a hell of a deal for a shotgun this — and this is a technical term mind you — this neato. For more information about the TEC 12 check out TriStar’s product page. Whether you’re interested in it for it’s novelty or because you want one shotgun that can cycle it all, you definitely want to check out the TEC 12.