Gun culture is alive and well in the Lone Star State, at least according to a poll conducted by the University of Texas at Austin and the Texas Tribune.

The poll, which surveyed 1,200 registered Texan Voters between Feb. 15-24, found that 52 percent of respondents believe that the state’s gun laws should either be left as they are now (36 percent) or made less strict (16 percent).  Only 44 percent supported stricter gun laws.

However, when it comes to the issue of universal background checks, Texans showed widespread support for the measure, with 78 percent favoring mandatory criminal and mental health background checks on all firearms transactions (nationally, that number is around 91 percent, according to Gallup).

“The results illustrate how Texans are both ideologically and literally conservative when it comes to gun ownership and regulation,” said James Henson, director of the Texas Politics Project at The University of Texas at Austin and a co-director of the poll in the press release. 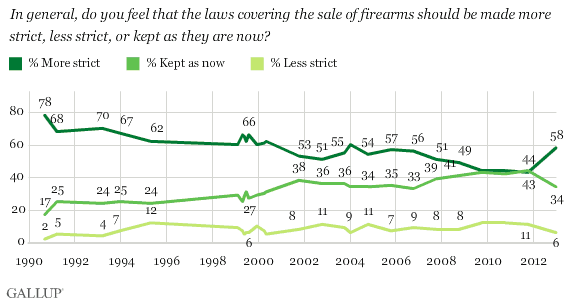 “They embrace gun ownership, and a majority seem comfortable with the status quo,” he continued. “The only major exception is that a large majority of Texans, like much of the rest of the country, support criminal and mental health background checks for gun purchases.”

As far as other specific gun control measures are concerned, Texans mostly oppose a federal ban on ‘assault’ weapons but where split on the issue of banning ‘high’-capacity magazines.  The poll showed that 49 percent of respondents oppose an AWB, with 40 percent in favor of it.  Forty-six percent favored a ban on magazines that hold more than 10 rounds, with 45 percent opposing it (with a margin of error of 2.83 percentage points, this could actually go either way).

“There seems to be a little more openness to specific gun control measures. But Texans have typically supported many of the proposals that score well nationally,” said Daron Shaw, a government professor at UT Austin and co-director of the poll. “Moreover, there seems to be an underlying suspicion that current gun laws haven’t been enforced with much enthusiasm or rigor.”

Forty-three percent of respondents claimed that at least one member of their household owned a firearm.  Forty-four percent indicated that no one owned a firearm on their premises.  The leading reason for having a firearm at home was for protection and self-defense (44 percent).  Coming in second to self-defense was hunting (13 percent).

In looking at these poll results, one is reminded of why gun owners love Texas.  As Texas Attorney General Greg Abbott said in January, when he was actively recruiting gun owners in New York to make the move down south to escape Gov. Andrew Cuomo’s draconian gun bill, “Texas really does stand as the last bastion of ultimate freedom in this country. Over the last decade, more than 4 million people moved to this state, and one reason is freedom and one reason is economic opportunity.”