In a report published on Tuesday, the Southern Poverty Law Center claimed that the number of “conspiracy-minded antigovernment ‘Patriot’ groups” has reached an all-time high in the wake of President Obama’s re-election and amidst his push for federal gun control reform.

The SPLC, a left leaning non-profit that “combats hate, intolerance and discrimination through education and litigation,” compiled its findings in a letter written to U.S. Attorney General Eric Holder and Homeland Security Secretary Janet Napolitano and warned of an increased risk of domestic terrorism from Patriot and hard-core hate groups.

“In the last four years we have seen a tremendous increase in the number of conspiracy-minded, anti-government groups as well as in the number of domestic terrorist plots,” wrote SPLC President Richard Cohen, a member of the Department of Homeland Security’s Countering Violent Extremism Working Group. “We now also are seeing ominous threats from those who believe that the government is poised to take their guns.” 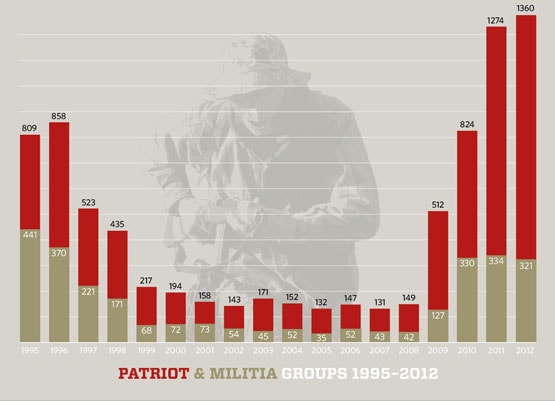 By the SPLC count, the number of Patriot and Militia groups shot up from 149 organizations in 2008 to 1,360 in 2012, an eightfold increase.  Patriot and Militia groups, not to be confused with hate groups, are those that generally believe the “federal government is conspiring to take Americans’ guns and destroy their liberties as it paves the way for a global ‘one-world government,’” according tot he SPLC.

Hate groups, like the Klux Klan, New Black Panther Party and Aryan Nation, on the other hand, which the SPLC also monitors, have remained just above 1,000 since 2009.

Given the explosive growth of these Patriot groups, in the letter to Holder and Napolitano Cohen went on to state, “because of the looming dangers, we urge you to establish an interagency task force to assess the adequacy of resources devoted to responding to the growing threat of non-Islamic domestic terrorism.” 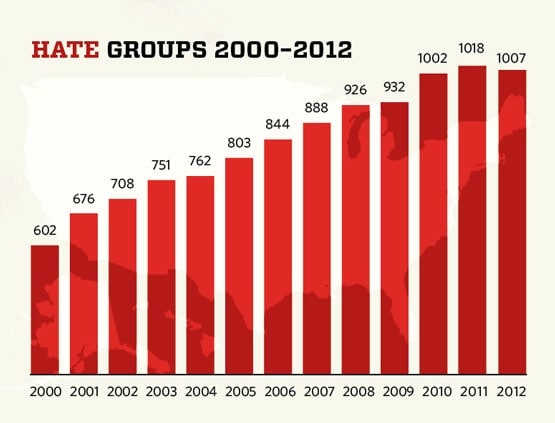 One of the organizations included on the SPLC’s Patriot and Militia list (which you can read here), was the John Birch Society, a right-wing political advocacy organization that is anti-communism and pro-limited government.

USA Today reached out to Bill Hahn a spokesman for JBS to get his thoughts on the SPLC’s findings.

The Southern Poverty Law Center “is very adept at creating the specter that armed groups will overthrow the government or that the continuously dying supremacy movement is lurking behind every rock,” Hahn told USA Today. “The SPLC will continue to utilize fear to fill their bank accounts.”

While there’s no doubt that there are dangerous organizations out there that should be closely monitored for their hateful rhetoric and violent proclivities, like the New Black Panther Party and Westboro Baptist Church come easily to mind, one wonders how many of those Patriot and Militia organizations really pose a threat to the government or the safety of the public.

By the SPLC’s own admission, being listed under the Patriot and Militia category “does not imply that the groups themselves advocate or engage in violence or other criminal activities, or are racist.”

Speaking to that point, given today’s hyper-partisan climate is any non-profit even capable of making an accurate threat assessment, one that’s void of a political agenda?

It seems that instead of doing a fair and objective analysis, it’s easier to simply label anyone who’s at the other end of the political spectrum a threat to the nation.

That said, what do you think?  Are we on the verge of an insurrection?  Do you believe that there is a greater risk of domestic terrorism?