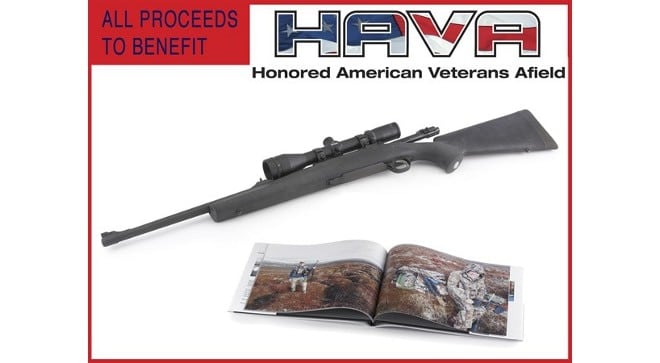 Ruger is auctioning off two rifles to support Honored American Veterans Afield, or HAVA. Both are no longer in production, giving bidders a chance to own not only uncommon rifles but donate to a charity that helps soldiers returning from duty with disabilities make a healthy return to life in America.

This represents a milestone for Ruger’s charity auctioneers, as these are their 100th and 101st rifles to go up on the block.

The 100th rifle is a special M77 Hawkeye Alaskan that was once owned by Ruger President Mike Fifer. Fifer used this big game rifle during a brown bear hunt on the Alaska Peninsula in May 2010 and brought down a large 8-foot, 10.5-inch brown bear. The hunt was featured on the Ruger TV series, “Ruger’s Adventures.”

It is a mid-size bolt-action game rifle chambered in .375 Ruger, a big-bore cartridge that excels even with this rifle’s comparatively-short 20-inch barrel. It has a Hogue overmolded stock, express sights up front and a drilled and tapped receiver for the included Burris scope.

It comes with an autographed copy of Fifer’s photo album of his Alaskan hunt. 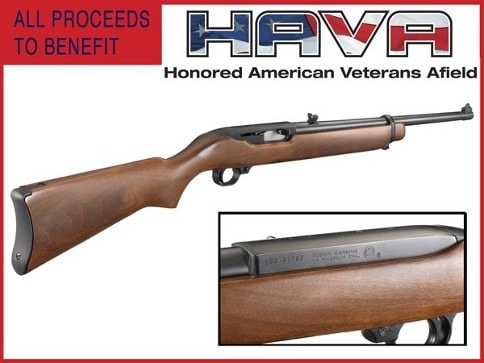 The 101st rifle is a Ruger .44 Carbine, and while it has a less impressive pedigree, is no less interesting as a rifle. In fact, some may find it a little more appealing, as the .44 Carbine’s a bit harder to find these days.

This particular rifle was made March 5, 1974, and it does not have any warning stamps. It has the original American Walnut stock with a metal buttplate, sling studs, a gold bead front and folding rear sight and is drilled and tapped for a scope.

The .44 carbine has an 18.5-inch barrel to ensure you get every ounce of energy out of your .44 Magnum cartridges. It feeds from an internal four-round magazine for a capacity of 4+1.

Both auctions started at $300 and are already selling for over $1,000, but for HAVA’s sake we hope they sell for a lot more.