The US Army infantryman and USMC marine of fifty years ago carried in almost every case, firearms far different from the ones carried by either their counterparts fifty years before or those of today. Nevertheless, the weapons they carried were technological marvels of their time that are till relevant today.

Adopted as the United States Rifle, 7.62 mm, M14, but known today by its last name only, the M14 was the only detachable magazine, select fire battle rifle ever issued in numbers to the US military. Designed over a decade long period with near constant input by the Army, it was adopted in 1959.

With one of the shortest tenures as a US military standard issue long gun, M14 rifles are quite collectable today.

The rifle was gas-operated with a rotating bolt action, firing from a 22-inch barrel. It used a 1:12 RH twist to stabilize the 173-grain standard 7.62x51mm NATO (roughly the same as .308 Winchester) ammunition it shot. Select-fire, it replaced the semi-auto only 8-shot 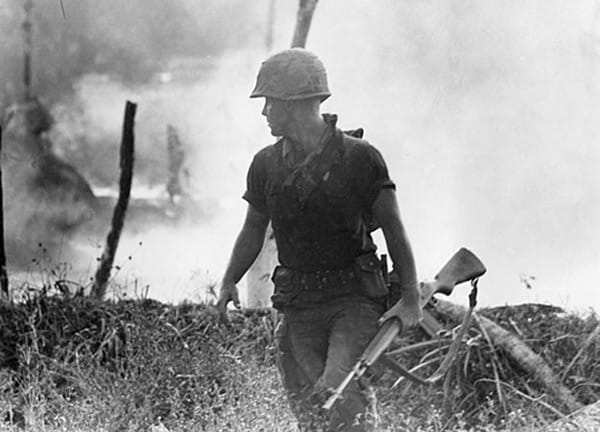 M1 Garand and the 15-shot M1 carbine with a battle rifle that could spit 20 rounds from its detachable box magazine either one shot at a time in semi-auto mode or 750-rounds per minute when on full-auto.

Unfortunately it was seen as near uncontrollable in full-auto by the average soldier except in short bursts. It was also almost three pounds heavier, at 11.5-pounds loaded, than the M1 rifle it nominally replaced. Although the government had ordered more than 1.3-million M14s in the four years before 1963, Secretary of Defense Robert McNamara halted further orders of the rifle that year. The military was in a tense Cold War standoff with the Soviet Union and some 16,000 American military personnel were in a little known country called South Vietnam.

The next year he ordered a new rifle that would be called the M16 to replace it, giving the M14 one of the shortest spells as a standard rifle in US history.

The average GI in 1963 would have rarely carried a sidearm, unless he was a heavy 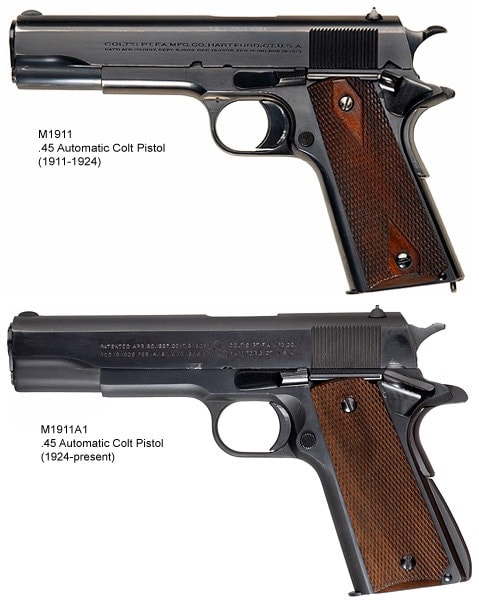 The 8.25-inch long semi-automatic pistol had a 5-inch barrel and an overall weight of 2.44-pounds. It fired from a single stack 7-shot magazine. Even though it was often called a “Colt”, most 1911A1s in government use by 1963 were in fact made by Remington Rand (the typewriter maker, not the gun company), along with Ithaca and others. They ranged from well-used sloppy guns that had fired thousands of rounds to near-new guns that had been in arsenal storage for decades depending on the unit.

During the two world wars, the US military became enamored with the 12-gauge pump action shotgun for both close quarters combat and auxiliary guard duties. In 1963 large numbers of shotguns, some dating back to the fighting in 1917 against the Kaiser were still 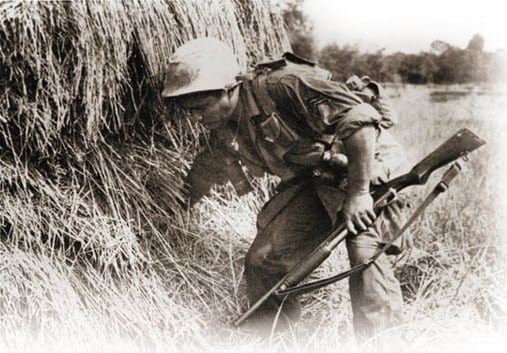 All of these shotguns had a tubular magazine under the typically 20-inch long cylinder bore ‘riot’ barrel that held five 2.75-inch 12-gauge shells. Generally, these guns were fitted with an over-barrel heat shield/bayonet lug but other than this feature they were only slightly different from their commercially made brothers then for sale through Sears, Montgomery Ward, and other outlets. At this time the military still used WWII-surplus M19 all-brass hulled 00-buck rounds, in ten shot cartons.

With the adoption of the select-fire M14, just a few years before, issue of the WWII era M3A1 “Grease Gun” and the various models of the classic M1A1 “Tommy Gun” declined.

These .45ACP submachine guns were still commonly seen in National Guard units, and in the hands of tank crews, combat engineers, and vehicle drivers for whom the M14 and in some cases even the legacy M2 .30-caliber select fire carbine were seen as being too unwieldy.

The M3A1 was in 1963 by far the more commonly encountered of the pair. It was an inexpensive 22-inch long weapon with an 8-inch barrel. It was on the heavy side, at nearly 8-pounds even without the stick magazine that held 30-rounds of .45ACP ammo. It had a lower cyclic rate than the M14, at about 450-round per minute, which could empty its magazine in about four seconds.

Actual US-military issue M14s are pretty much not going to happen as the military gave away more than 400,000 of these to overseas allies, torched (by order of Clinton) some 750,000 more, and are still using the rest as Designated Marksman Rifles. Less than 50 verified USGI select-fire M14s are in civilian hands and were registered with the ATF before 1968. A few thousand select-fire versions were built and sold by civilian manufacturers before 1986 but the Hughes Amendment cut all that out.

For most collectors who want a M14, the options are semi-auto versions. Springfield Armory has sold a semi-automatic billed as the M1A for decades, which starts at about $1400. Chinese made pre-1994 Polytech and Norinco M14 clones, also semi-auto only, go for a little less.

Colt 1911A1s are wide spread on the civilian market and they have always been seen highly sought collectable firearm. The 1911 design itself is now over a hundred years old but is still in strong production with dozens of manufacturers around the world and with prices that start at about $350 and move rapidly upwards from there. US-military marked .45s bring a premium and are a good investment.

A whole subset of military shotgun collectors devour any ‘US’ marked American made scattergun out there. The typical combat shotguns of the 1963 era, to include the Stevens 520/620, Winchester 97/12, and Ithaca 37 saw hard service in Vietnam and later. Many, along with earlier WWII-era guns, were left over there when the United States pulled out in 1973 and sometimes trickle into the country. Commercial models of these same guns, often worth $100 or less depending on the condition, can be had and visually modified to mimic a military shotgun. With that in mind, always be wary of fakes as they pop up with this type of gun with stunning regularity.

What can I say; everyone wants to be a grunt.