EDITORIAL: Capt. Mark Kelly Doing His Part Keeping Guns Off Streets One AR-15 at a Time (and a 1911 and some magazines)

Mark Kelly, on the afternoon of March 5, bought an AR-15 from Diamondback Police Supply in Tucson, Arizona.  In addition to his impulse “assault weapon” purchase, Kelly also picked up some AR magazines and a 1911. 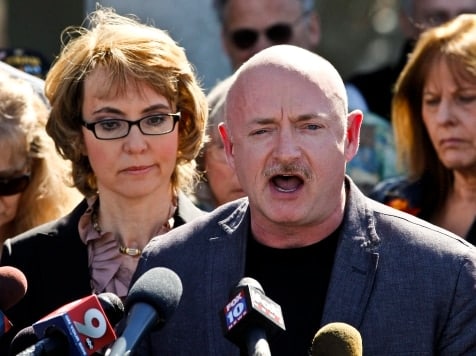 Giffords and Kelly rallying against guns.

The fact that there was an AR-15 for sale in a gun store might deserve an article all its own, but we’ll hold off on that optimistic note.  And Guns.com doesn’t typically consider the purchase of a modern sporting rifle news. But let’s consider who ponied up for this weapon of mass destruction.

Capt. Mark E. Kelly, husband of former Congresswoman Gabby Giffords.  Capt. Mark Kelly, co-founder of Americans For Responsible Solutions, a non-profit created to “limit the sale of high capacity magazines, which are not needed for hunting or self-defense.”

Kelly, whose own website describes him as “a combat veteran [who] know[s] the power and deadliness of assault weapons and believe[s] their sale should be limited.”

Limited.  Limited, apparently, to Mark Kelly.  From the ARS (not to be confused with ARs, a common abbreviation for the rifles in question) website:

Assault weapons are high velocity semiautomatic rifles originally designed for the military for efficient killing of many people, but now adapted for sale to civilians. Typically, they possess features like detachable ammunition magazines, pistol grips, detachable or folding stocks, and barrel shrouds, among others, which are useful in combat. The Newtown killer used such a weapon to murder 26 kids and teachers at Sandy Hook Elementary School.

“I served in the military for 25 years. I mean, I know the value of having an assault weapon, a gun that can kill many people, very quickly,” Kelly told Chris Wallace in a  Fox News Sunday interview last month. “I personally don’t believe that we should have, you know, the average person on the street, including criminals, mentally ill and terrorists should have easy access to those weapons.”

So why’s Kelly buying himself an AR-15?  Perhaps he is anticipating the need to “kill many people, very quickly.”  Or maybe his goal is simply to keep the AR-15 out of the hands of “an average person on the street.”  We can only guess.

After news broke of the confusing acquisitions of Capt. Kelly (on BreitBart.com), the following post appeared on Kelly’s facebook page.

Looks like the judiciary committee will vote on background checks next week. I just had a background check a few days ago when I went to my local gun store to buy a 45. As I was leaving, I noticed a used AR-15. Bought that too. Even to buy an assault weapon, the background check only takes a matter of minutes. I don’t have possession yet but I’ll be turning it over to the Tucson PD when I do. Scary to think of people buying guns like these without a background check at a gun show or the Internet. We really need to close the gun show and private seller loop hole.

So he has owned up to buying the very “weapon” he doesn’t think that average Americans should be able to buy.  Nice. And when he gets possession, he will be turning it over.

Perhaps it is a gift of sorts.  Like a support you local law enforcement agency kind of AR-15 purchase.  Though it still seems a bit questionable in light of question 11 a. on ATF form 4473.

How did you answer question 11 a., CAPT Kelly?

With regards to the possible implications of a convoluted straw purchase, Kelly had this to say to Fox News: “There are gun laws on the books that aren’t enforced, specifically with regards to background checks. I mean, there had been 1.7 million people that failed the criminal background checks since 1999. And, not enough of them are prosecuted. They should be prosecuted and there should be stiff penalties.”

Oh, who are we kidding?  We all know who he was buying the AR-15 for.  And all I have to say is right-on Capt. Kelly.  We’ll have that thing tricked out in Magpul gear within the week.  Kelly’s next purchase will be a scatter gun and he’ll be running 3 gun competitions by the end of srping.