The contract has a 10-year run, earning Remington $79.7 million for the rifles with Advanced Armament Corp. Titan QD suppressors and 4,696,800 rounds of ammo.

After more than three years of deliberations, the military’s joint spec ops have determined that the MSR is best-suited for the job. Based on Remington’s time- and battle-proven Model 700, the MSR is a big step up from the bolt-action rifles the Army, Navy and Marines have become accustomed to.

Unlike the XM2010 ESR (Ehanced Sniper Rifle) which is based on the Remington 700, the MSR was built from the ground up to meet the SOCOM requirements for the PSR with a Melonite-finished barrel and titanium locking lugs. 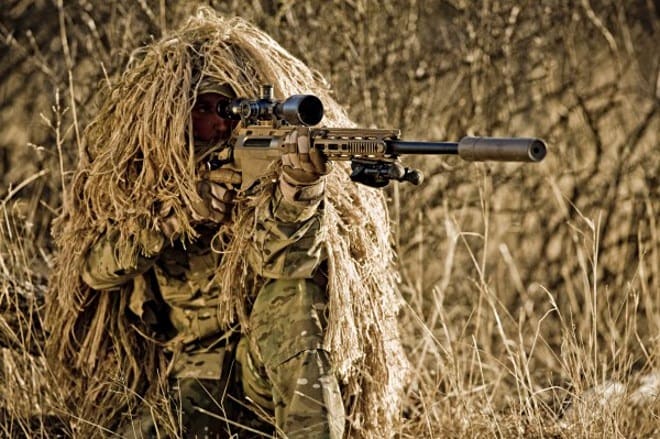 Remington’s MSR edged out several other notable rifles in this competition, including the FNH Ballista and Sako TRG M110. Other rifles considered for the role included the Accuracy International AX 338, Armalite AR-30 and Barrett MRAD.

The MSR uses a long action and is chambered primarily in .338 Lapua Magnum, but due to its modular nature, can be easily converted to fire .338 Norma, .300 Winchester Magnum and 7.62 NATO. In its default configuration Remington guarantees a 0.7 MOA accuracy with factory-loaded match-grade .338 Lapua ammunition at 1,000 meters and sub-MOA accuracy between 300 and 1,500 meters.

In addition to being able to easily swap calibers and cartridges, the MSR has a totally-adjustable side-folding buttstock and massive 20 MOA top rail for multiple optics, and can be fitted with side and bottom rails for accessories.

The work will be performed at two Remington facilities Ilion, New York, and Elizabethtown, Kentucky, and the ammunition at Barnes Bullets facility Mona, Utah. The production run is expected to be completed by March 2023.

Thanks James for the tip!