5 Knife-Equipped Handguns: Pistols with a point

Whereas a rifle can reach out and touch someone, handguns have always been more up close and personal while knife fighting has been described as the most intimate combat scenario of them all. So what could be better for those who relish a good gutter fight than a knife attached to a handgun?  Here’s five of our favorite knife handguns.

Why a knife on a pistol?

In Renaissance Europe, defense weapons began to increasingly fall into one of two categories: ranged weapons like guns and bows that hurled objects and projectiles, and edged weapons, like knives and swords, used to pierce, hack and slice. 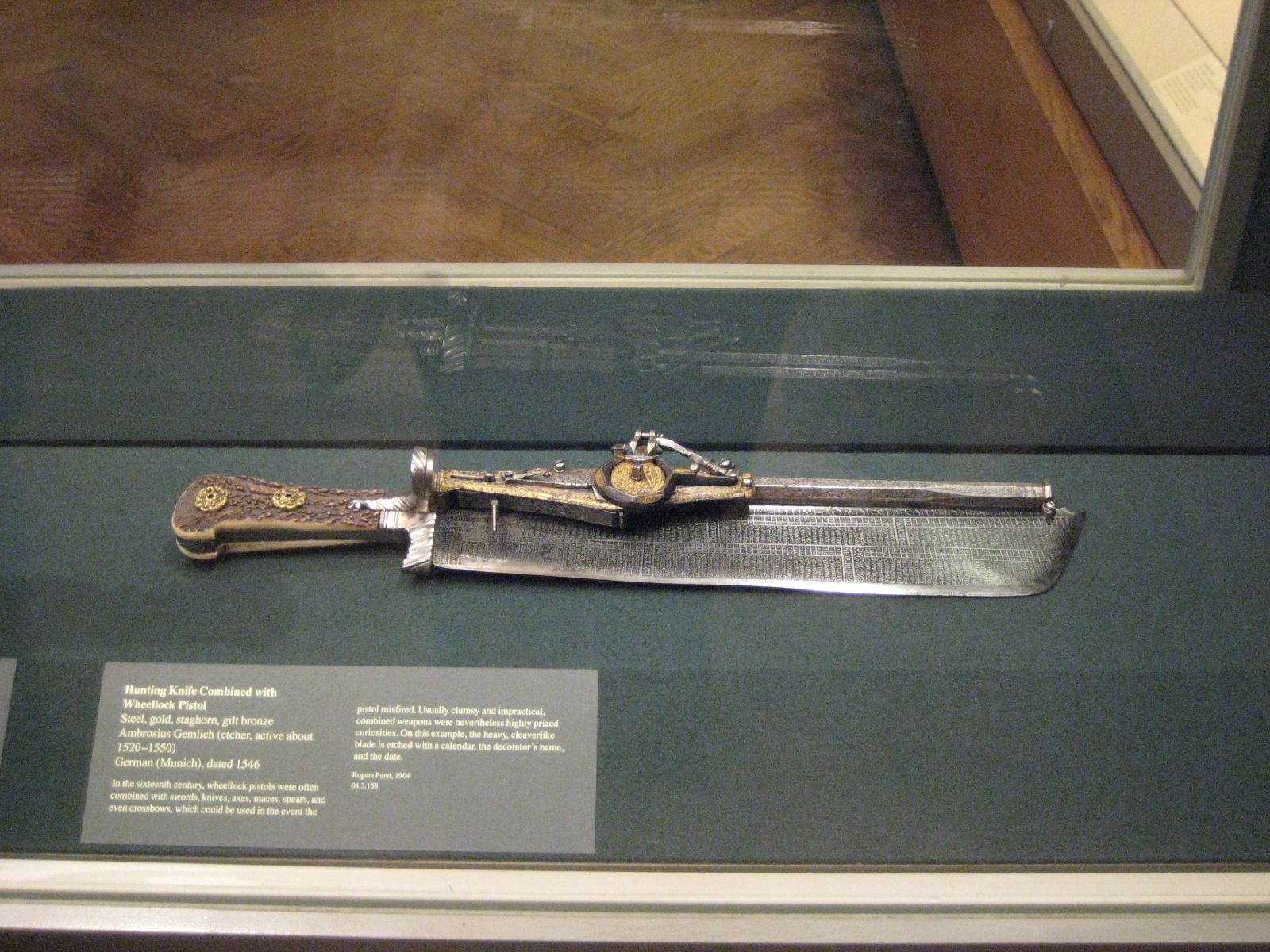 Hunting knife and wheel lock pistol made in Munich Germany, 1546. The large blade has a calendar etched into it surface along with other personal markings and decorations.

An era of innovative ideas, it did not take weaponsmakers long to start attempting to combine the two. For example, the pike (basically a long spear and one of the most effective weapons in human history) was augmented first by the musket and then finally replaced by the bayonet—which turned a musket into a pike.

The ability to retain the advantage of distance (even if your gun is out of commission) makes the bayonet seem obvious, but why would one want to apply this same concept to a handgun? Truly ridiculous, you say? Well, these hybrid knife-pistols were the original pig stickers. Hunters in Europe in the 15th century added long bladed knives to the end of their flintlock pistols so they could have a means of defense in the event that the boar they chased wasn’t dropped by the weak and unreliable boom stick of the day. These combos remained popular until gun science got its act together.

Fast forward to the 19th century. In 1838, the US Navy was equipping an exploration cruise, the four-year long Wilkes South Seas expedition, to chart little known stretches of the Pacific. To arm ashore teams of sailors against possibly hostile natives, they ordered 150 Elgin pistols. These smoothbore .54-caliber percussion cap muzzleloaders were sistered to 11-inch long abbreviated cutlasses, and saw combat in at least four battles on far flung islands during the voyage. These were sold as surplus after the expedition and if you find a real one today, it’s a five-figure investment.

In 1860 Mr. L. Dolne a workshop owner in the Belgian gun making Mecca of Liege, produced what a legend among personal defense weapons. Remembered as the Apache revolver due to its use by French criminals of the same name, the handgun was a 13-ounce five-shot revolver with a folding set of brass knuckles for a grip and a 1.15-inch bayonet as a hood ornament. It’s odd, and ugly, but for its time it was effective. 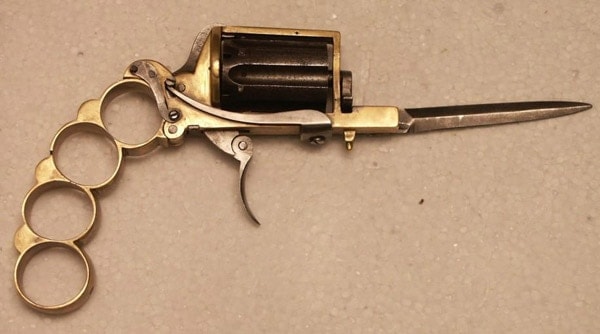 Apache Revolvers featured both a bayonet and brass knuckles.

When the open and fluid first month of World War 1 stalemated into four years of trench warfare, combat changed. It became the war of the raiding party and rapid frontal charges, which meant soldiers would have to engage their opponents at close range. Regular soldiers armed themselves with ax handles, clubs, and entrenching tools, but officers wanted something with more finesse. One such English gentleman, Lt. Arthur Pritchard of the Royal Berkshire Regiment, took a long French Gras Model 1874 Bayonet and modified it to fit under the barrel of his Webley MkVI revolver. It was a sharp move for him and he sold the design to the Greener Company of the UK who produced them for other gentlemen officers to purchase from their own funds.

The Greener Webley MkVI used a French Gras Model 1874 Bayonet and the barrel of a Webley MkVI revolver.

In the early 2000s, the well-respected Czech arms giant CZ-Brno offered a $100 bayonet attachment for their CZ-SP01 model handgun.  The detachable knife-type bayonet could only be mounted on CZ pistol rails and added a significant amount of weight to the end of the barrel.  In the aftermarket, the CZ-SP01 is a popular handgun and shooters usually have a good sense of humor about these attachments though it’s unlikely examples with a bayonet will command significantly higher prices.

Today LaserLyte markets the Mini-Becker, a 5.75″ overall flat-tipped pistol bayonet with a seatbelt-cutter gut hook. A K-Bar style Warthog model is the same length and adds just 2.4-ounces to the firearm. Made to fit on most standard under barrel accessory rails on modern combat pistols, the Mini-Becker and Warthog goes to show that pistol add-ons never go away, they just change their mounting system. 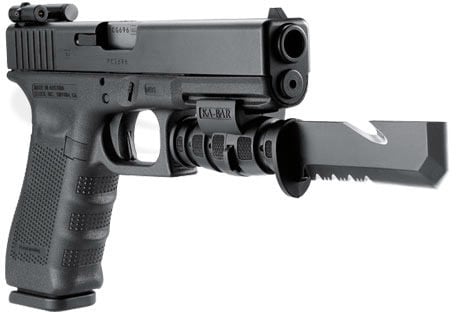 Laserlyte bayonet’s fit many different makes and models of handguns.

Gentlemen, if world war 3 sends us back to the trenches, sound the charge, we’re ready!