DRD Tactical, inventors of the premium Paratus AR-10-based takedown rifle, has expanded on their series of “suitcase guns,” rifles that can be broken down and carried in cases that would be way too small for traditional AR rifles.

Not only have they added more Paratus .308 Winchester rifles in different colors and configurations, they’re gearing up to launch two new 5.56 NATO AR-15 uppers.

The resemblance of DRD’s Paratus .30 caliber rifles to the standard AR-10s on the market is almost nil. They have heavily-modified upper and lower receivers and use a nontraditional bufferless recoil assembly. This allows the Paratus to use a Magpul ACR folding buttstock.

Instead, the recoil assembly is housed in the upper receiver, which is raised to accommodate the extra parts. The cheek weld is fairly standard as the ACR stock has an equally tall cheekpiece. Also, the charging handle is on the left side of the rifle, connected to the bolt.

Of course, what makes the Paratus really stand out is the barrel and handguard. The handguard slips off with the flip of a lever, revealing a quick-detachable barrel and gas system. The upper receiver can be split practically in half, making the barrel assembly the longest piece of the gun.

The Paratus rifles were developed for special forces to address a military request for a “Clandestine Break-Down Semi-Automatic Rifle” (CSR) proposal made by the Joint and Special Operations Program (JSOP), and as such, DRD Tactical really pulled out the stops. This is reflected by the price: a Paratus will run you over $5,000 in any configuration.

We hope the new AR-15 upper changes that.

Using the same handguard retention mechanism and barrel mounting system, the new AR-15 uppers, the P556-FN and P556-LW, are built on a standard upper receiver and will work with any regular AR-15 lower. 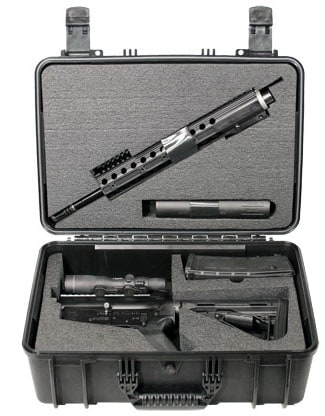 They have a full-length 12-o’clock rail and are compatible with Magpul rail sections if you want to add more Picatinny to the handguard.

DRD Tactical will be offering the uppers with a hardcase that accepts the barrel assembly and a standard carbine lower and four 30-round magazines.

The only questions that remain are when, and for how much. DRD Tactical has not released prices or a launch date. We look forward to finding out more.