The Iowa sheriffs who oversee the counties of O’Brien and Woodbury have caused a stir with their decision to trash carry permit applications once they’re processed, instead of saving them for the three-year period that the Iowa Department of Public Safety recommends.

Why is this a big deal?  Put another way, does it even matter that these counties destroy the applications once a gun owner has been issued or denied a carry permit?

Ross Loder of the Iowa Department of Public Safety told the Des Moines Register that while junking the paperwork that is supposed to be part of the public record isn’t illegal, it’s not the preferred protocol given the following concerns:

• Destroying the public record would make it impossible for a sheriff to potentially revoke a permit if, by chance, it was alleged that somebody lied to obtain it.

• If someone were to commit a heinous crime, the application could offer insight as to whether the individual lied, and whether sheriff officials properly approved the permit.

• Applicants have 30 days to appeal a sheriff’s denial. Destroying the application — as is done in O’Brien and Woodbury counties — could create difficulties for the sheriffs when they try to defend against appeals because the application is a piece of evidence that can be used in legal proceedings. A spokesman from the Iowa Department of Inspections and Appeals said he wasn’t aware of destroyed applications becoming an issue in appeals at this time.

• The FBI conducts checks to see if a highly sensitive background system is being used properly, and the applications are the best evidence that abuses are not occurring.

In their defense, the sheriff’s offices said that keeping the applications isn’t really necessary and that it’s more of a hassle than anything else due to requests from gun-related businesses that solicit the information for marketing and advertising purposes.

“We don’t want to be responsible for (maintaining) the public record,” Lt. Brad Carlson who works for Woodbury County told the Register.

Carlson added that his office maintains a computer-generated spreadsheet that contains applicant-related info in the case of a denial: full name, date of denial, date of birth and reason for denial.

When asked if his department could later prove that someone falsified a permit, he admitted that it might be more difficult than if his department had kept the apps to begin with but he said they’d still be able to conduct an investigation if something illegal transpired. 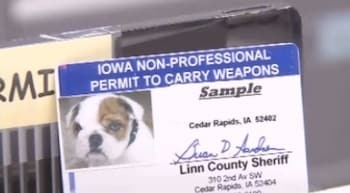 “Our documentation wouldn’t be there, but we could revoke them if we can perform an investigation and show that something’s not right,” he said.

In other words, it doesn’t seem to be that big of a deal.  Yet, that doesn’t stop some from being critical of the way they handle their business.

“The question comes down to is this a reasonable way to be handling public records?” asked Kathleen Richardson, director of Iowa’s Freedom of Information Council and a journalism professor at Drake University, to the Register.

Richardson said keeping the applications is an important part of public safety, that they can help reveal loopholes in the system.

“Just because they don’t want to be responsible for it, that doesn’t seem to be a very responsible justification” for not maintaining the records, she said.

So, what’s your take?  Should the departments keep the carry permit applications?  Or are they really just a waste of space, particularly given the fact that departments often have other records on file, i.e. the spreadsheet?

Is this much ado about nothing?