Pick a Color, Any Color (VIDEO)

Gun owners are like car aficionados. Nearly all worry about functionality, but for some, looks really matter, too.

For centuries, maintaining the look of a firearm was fairly simple. You kept the metal parts polished, blued or perhaps treated with a phosphoric acid solution to keep away rust. To really go high-end on looks, you focused on the wood, perhaps throwing in a little engraving somewhere to boot.

Modern chemistry, however, has in the last few years given the gun owners many of the same options car customizers have long enjoyed. A palette of colors and patterns is available to anyone who decides, “That ugly gun needs a little help.” 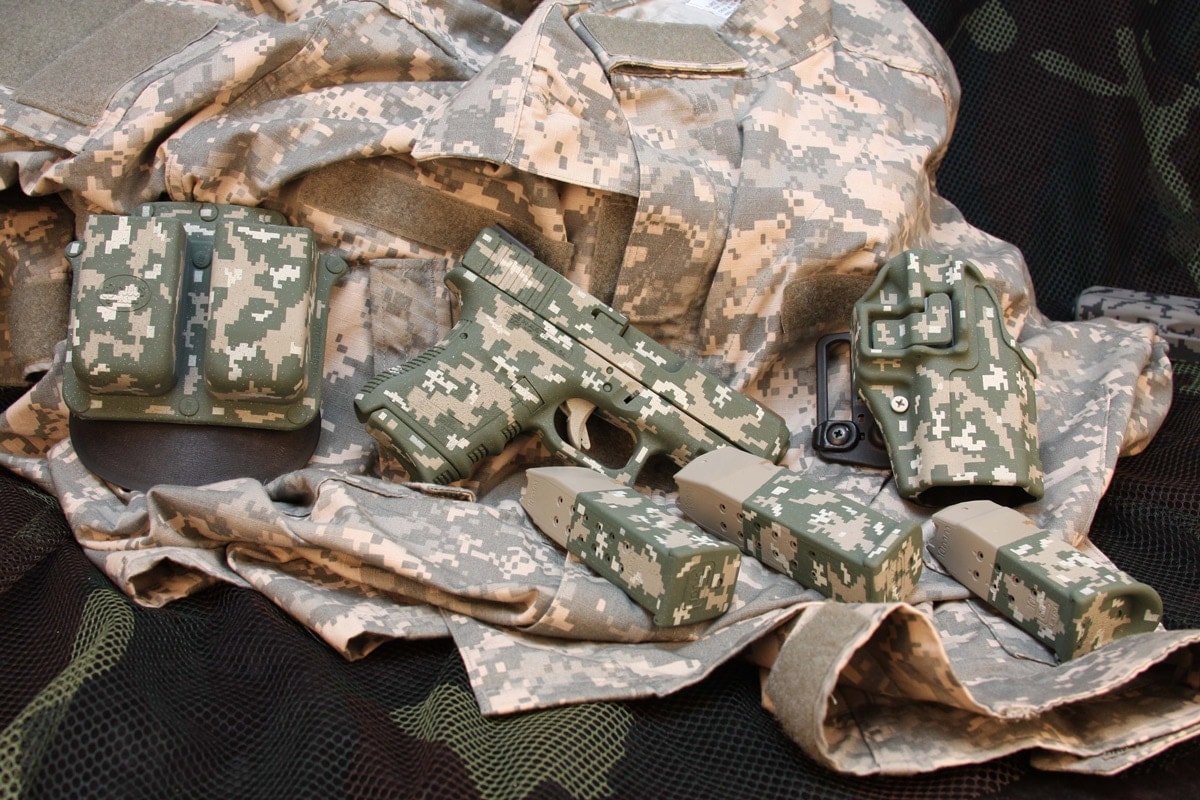 Now, it’s long been possible to paint a gun, or at least some gun parts. Painting it in a durable fashion was the problem. The wrong kind of paint could wreak havoc, particularly if it were to fleck or peel and come into contact with parts exposed to friction or high-pressure gases.

Even the people at Rust-Oleum, one of the most common makers of paints and other coatings found in your local hardware store, caution against using any of their products on firearms.

“We don’t manufacture anything we would put our name behind for use on firearms,” said a Rust-Oleum spokeswoman. The interaction of the paints with gun cleaning solvents, friction and gunpowder simply is something the company has not tested, she said.

There are more expensive options for people wanting to explore the use of gun paints, however, and some of them can even improve the functionality of a firearm. They’re not always easy to use, however.

Jeff Harless and his nephew Andy Harless own a small gun coating company in Kingsport, Tennessee, called Dipping Wulf Creations. In many ways, their operation is built around the use of Duracoat or another, more expensive gun paint, Cerakote.

Both of these products have been designed to withstand the stresses of cleaning solvents, friction, hot gases and modern propellants. These coatings even maintain what the experts call “lubricity,” meaning slides and other parts coated with Duracoat or Cerakote move freely without oil or grease.

Cerakote is about 10 to 15 percent more expensive than Duracoat for the customer, Jeff Harless said. “The Cerakote goes on thin enough so that you can use it on the internal parts of the gun.”

Cerakote and Duracoat both come in a wide variety of colors, leading to designs ranging from subtle to a toy-like garishness, depending on what the gun owner is seeking. There’s another step, however, one that can take gun appearances into the surreal.

Would you like your firearm to appear as if it’s covered in snakeskin or dragon scales? Or maybe you want a camo effect so powerful that you may drop your shotgun in the woods and never find it? Then dipping is the next step you might want to consider.

Dipping is a matter of taking a printed sheet that releases a water-soluble, floating image when exposed to a water bath. The object receiving the image — for example, a pre-coated barrel or an AR-15 receiver — is then carefully dipped in the floating image.

The image does more than wrap around and stick to the object. It chemically etches itself into the base coat, the Harlesses said. To do this successfully, the person doing the dipping has to have a steady hand and know quite a bit about the properties of the undercoating.

“We practiced a year before we started the business,” Andy Harless said. “We try to get in there and fill all the nooks and crannies, the detail stuff.”

Some people fear the dipping process, the Harlesses said, simply because the finish doesn’t appear durable. They use it in conjunction with Duracoat or Cerakote undercoatings and clear finishes, however, so the pattern remains sealed and secure.

Prices for such treatments vary widely depending on the size of the gun, colors chosen and type of dip pattern desired. When it comes to the patterns, the buyer in part may be paying for trademarked designs from Mossy Oak or Realtree, which of course will cost more.

The Harlesses said the cost is roughly comparable to having a firearm parkerized.

What remains, of course, are decisions. Again, gun owners may find themselves in the same artistic dilemma as car owners: What colors and patterns work best with my pistol, shotgun or rifle? Do I want the look to be subtle or extravagant?