EDITORIAL: Did the NRA Make a Backdoor Deal to Not Oppose Universal Background Checks? (VIDEO)

On Tuesday, NBC News alleged that the National Rifle Association would not fight a federal universal background check bill provided that the UBC bill omits language that calls for a national gun registry.  Kaise Hunt, a political reporter for NBC News, wrote:

Senators negotiating a bill mandating background checks for all gun buyers are privately expecting the National Rifle Association not to fight the measure — provided the legislation does not require private gun sellers to maintain records of the checks, NBC News has learned.

If that requirement is met and key Republican negotiator Sen. Tom Coburn of Oklahoma signs on, the powerful gun lobby has signaled to lawmakers that they would not actively oppose the bill — and not count votes in favor of it as part of its highly influential NRA lawmaker ratings — according to Senate aides familiar with the stalled negotiations.

Not long after the NBC News article was published, the NRA released a statement flatly denying the claim that they would not fight a federal UBC bill:

The story posted on NBCNews.com alleges that NRA will not oppose expanding the background check system to include all private firearm sales, “provided the legislation does not require private gun sellers to maintain records of the checks”.

This statement is completely untrue.

The NRA opposes criminalizing private firearms transfers between law-abiding individuals, and therefore opposes an expansion of the background check system.

The NRA supports meaningful efforts to address the problems of violent crime and mass violence in America, through swift and certain prosecution of violent criminals; securing our schools; and fixing our broken mental health system.

Perhaps.  But, I believe the question isn’t whether the NRA would fight a UBC bill, because let’s face it, they’re the NRA, they’re going to publicly oppose anything that even vaguely resembles a gun control bill, so the question is whether they would really care if it passed.

Let me unpack that idea, i.e. what I mean by “care.”  See, as Hunt astutely pointed out, the crux of the matter relates to the all-important NRA lawmaker ratings, the main leverage (aside from campaign contributions) that the NRA has over politicians, particularly those lawmakers who come from districts or states that by and large embrace gun culture.

So, for instance, if a bi-partisan UBC bill is proposed that doesn’t have a provision calling for a national registry and it passes through the Senate, would the NRA care enough to start disparaging the Republican or Conservative supporters of the bill?  Would the NRA give someone like Sen. Tom Coburn a failing grade for sponsoring the bill (Coburn, an NRA member, currently as an “A” rating)?

To draw up another scenario, if Coburn came out in favor of and subsequently voted for Sen. Dianne Feinstein’s ‘Assault Weapons Ban,’ the NRA would certainly crucify him (figuratively speaking) and deservedly so.  But with the aforementioned UBC bill, I’m not so sure the NRA would be so aggressive in their retaliation.

This, to me, seems to be the ultimate question.  What are the direct consequences for those lawmakers who support and/or vote for a UBC bill that contains no mandate for a national registry?

Because, make no mistake about it, it’s coming down the legislative pike.  Of Obama’s gun control proposals, it’s arguably the most political feasible.  It’s also got the most public support; polls show consistently that a vast majority of those surveyed support UBCs. 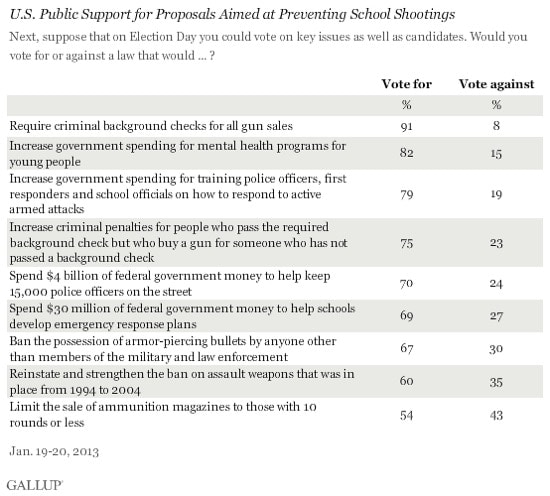 Judging by Sen. Joe Manchin (D-WV) comments, who is also working on drafting the UBC bill along with Sen. Coburn and staunch pro-gun control advocate Sen. Chuck Schumer (D-NY), he doesn’t anticipate there being any backlash from the NRA for supporting a UBC bill.

“Tom Coburn and I come from a culture, a background, a culture of guns. So I think the NRA would respect and appreciate where we’re coming from, with the understanding that we understand our NRA members,” Manchin told NBC News on Tuesday.

For now, the NRA is playing it smart on the UBC front.  As NRA-ILA Executive Director Chris Cox told NBC News, “We do not take positions on hypotheticals. We will make our position known if and when legislation is introduced.”

“To be clear, the National Rifle Association does not support legislation that would criminalize otherwise lawful transfers of firearms between law abiding Americans,” Cox added.

In principle the NRA is opposed to UBCs.  As are many gun owners.   But when the rubber meets the road and the bill is introduced, how vehemently will they oppose it?  And if it does pass, what will be the repercussions for lawmakers who support it?

Let me just say that I support the NRA regardless of what they opt to do.  If the NRA wants to call off the dogs on a bipartisan UBC bill that contains no registration mandate, I’ll support ’em.  If the NRA decides to unleash hell on Sens. Coburn and Manchin for drafting a UBC bill in the first place, then I’ll support that too.  Why?  Because all things considered, the post-Sandy Hook political climate, Obama’s momentum on this hot-button issue, the limited funds and resources available to fight for gun rights on both the federal and state levels, it’s not an easy call to make.