On Saturday, a New Jersey mother was arrested for making “terroristic threats,” aka reading the Constitution and calling a county tax assessor contractor a “pencil pusher,” at a public tax forum, the women was then forced to turn over her firearms to authorities.

So, how’d this all go down? 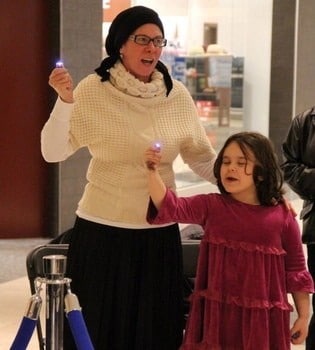 New Jersey mother Eileen Hart allegedly threatened a tax collector and was arrested for it.

Eileen Hart and her husband Keith own a house in Newfield, New Jersey.  Concerned about a pending tax hike based upon a property reassessment that the county tax assessor’s office had commissioned from a third party company – Appraisal Systems, Inc. – Mrs. Hart voiced her frustrations at a public meeting at the Gloucester Community Center.

At the meeting on Saturday, Mrs. Hart argued that the proposed reappraisal, which estimated her house had doubled in value, was completely arbitrary given the downed real estate market.

“How could they assume that my value had doubled when there is absolutely no housing market?” she asked TheBlaze in a phone interview.  “There is basically no GDP growth.”

She also noted how she never allowed the tax inspectors to survey her property.  When they came by she turned them away because her husband was at work.  As an Orthodox Jew, it’s against her religion to have men in the house when one’s husband isn’t home.  How could they know the precise value if they hadn’t actually inspected the property?

Lastly, she argued that the reassessment wasn’t only unfair, but it was also unconstitutional.

Naturally the tax assessor, Robyn Glocker-Hammond, and the representative from Appraisal Systems, Inc., Andrew Colavecchio, disagreed; they said they had a right to “assume” the value under the New Jersey State Constitution — at which point Mrs. Hart began reading the Constitution aloud.

“I tried to express my opinion and tell them that my Constitutional rights had been violated. I began quoting the Constitution, line by line,” she told Examiner.com.

Image courtesy of Eileen Hart, via Harriet Baldwin via The Blaze

Allegedly, this pissed off Glocker-Hammond and Colavecchio.

“Sit down and shut up,” Hart said Glocker-Hammond told her, adding that she (Glocker-Hammond) was there to “enforce the law,” as Examiner.com reported.

Some more heated words were exchanged between the parties and as Hart was leaving the building she called Colavecchio a “pencil-pusher.”

According to Hart, that put him over the edge, she told The Blaze that Colavecchio threatened to call 911 and “ran after us in the parking lot like a banshee, his face was purple, [he was] disheveled, [he] started to take down my license plate and ran off.  When he got to the doors of the building he screamed at us, ‘let’s see if you can pay your taxes now!’”

When Hart returned home with her family, she noticed there were five police cars from the Franklinville Police Department waiting for her.  The police told her that the Clayton Police wanted to speak to her about what had transpired at the community center.

The police took her into custody and transported her to the Clayton Police Department.  There, they charged her with “contempt” and making “terroristic threats.”

Hart was completely baffled.  Colavecchio had said in the police report that Hart was “yelling and screaming” and that she said “If the door is unlocked, I’ll be back with a gun.”

Hart vehemently denies she said anything of the sort or made any threats of violence.

“I did not use one curse word, I didn’t say the word gun, I didn’t swear, none of that.  I aired my grievances in a public place to [tell] the government that I did not agree with what they were doing to me or to anybody else,” she told The Blaze.

Image Courtesy of Eileen Hart, via Harriet Baldwin, via The Blaze.com

Nevertheless, she was booked and reportedly coerced into turning over her weapons, despite the fact that she was a law-abiding citizen with no criminal history.  The police sergeant had told her if she doesn’t give up her guns, her bail would be set prohibitively high and she may be detained for an extended period of time.

Given the fact that she has a 7-year-old daughter, Hart capitulated.  The sergeant told her she’d get her guns back “when this is all over.”

Hart, whose family had survived the Holocaust, couldn’t help but to draw a parallel to her current situation, noting that “massive gun registration [and confiscation] and invasion of private property” had been a hallmark of the Nazi regime when invading Poland.

“If quoting the Constitution makes me a terrorist, we are in Hitler’s America,” she told The Blaze.

Ms. Glocker-Hammon, via the county’s public information officer, told the Blaze that the tax assessor “has never experienced this type of extreme behavior from a taxpayer,” adding that it was Mr. Colavecchio who phoned the police because “he perceived the resident’s statements as a threat.”

Ernest Del Gurecio, the CEO of Appraisal Systems, Inc., said that they would postpone making any official comment until all the facts of the case are known.