Everyone in politics bends the truth.  But some do it more than others.  Here is a list of five memes gun-control advocates continue to propagate despite their dubious validity.

1.  40 Percent of Guns are Sold without Background Checks

From New York City Mayor Michael Bloomberg to President Obama to Vice President Biden, they’ve all mentioned the “40 percent” figure with respect to the number of gun transactions that are conducted without a background check.

“The law already requires licensed gun dealers to run background checks, and over the last 14 years that’s kept 1.5 million of the wrong people from getting their hands on a gun, said President Obama during a speech on Jan. 16, 2013.

“But it’s hard to enforce that law when as many as 40 percent of all gun purchases are conducted without a background check.”

In a previous Guns.com article, I investigated this issue in-depth.  What was the conclusion?  Well, if one accepts the findings of economist John Lott Jr., then as he said in his write up on the issue, “We don’t know the precise number today, but it is hard to believe that it is above single digits.”

However, if one believes that Lott is unfairly biased, that he leans too far to the pro-gun side, then one can consider the Washington Post’s analysis of that 40 percent figure:

In other words, rather than being 30 to 40 percent (the original estimate of the range) or “up to 40 percent” (Obama’s words), gun purchases without background checks amounted to 14 to 22 percent. And since the survey sample is so small, that means the results have a survey caveat: plus or minus six percentage points.

2.  Gun ownership is on the decline in America

Almost every pro-gun control advocate contends that gun ownership in the U.S. is on the decline.  And they all point to the same research to substantiate that claim, the bi-annual General Social Survey (GSS) conducted by the National Opinion Research Center at the University of Chicago.

However, the matter is far from settled.  There’s plenty of anecdotal evidence  to suggest gun ownership is on the rise – the number of FBI background checks has skyrocketed, studies indicate that more women are embracing gun ownership, gun dealers testifying to how crazy business has been in recent years – but perhaps the most convincing evidence is the Gallup Poll, which suggests that there has been no consistent decline in gun ownership (see chart below for comparison in poll findings). 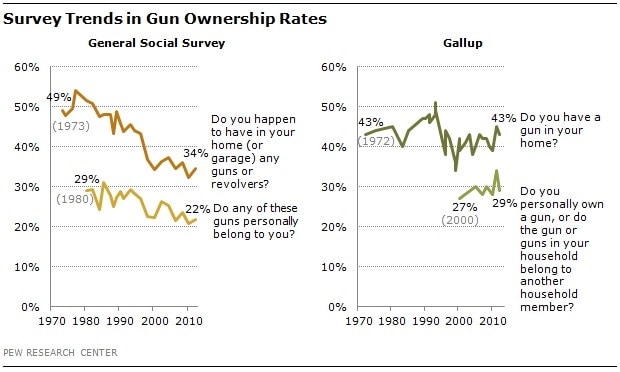 3.  If you own a gun, you’re more likely to have it used against you than you are to use it in a self-defense situation

There is one very big, glaring issue with this claim.  That is, the number of Defensive Gun Uses (DGU) per year is unknown.  What’s DGU?  It’s the use of a firearm in self-defense or in defense of others.

Obviously, this happens all the time.  Law-abiding citizens use or brandish or fire a gun to protect their property or to thwart off a potential attacker, burglar, rapist, etc.  But determining how many times a year this actually happens is a subject of much debate amongst social scientists and criminologists because frequently DGUs go unreported to police, e.g. if one shows a gun to defuse a situation, does that person always file a police report?

That said, on the high end, criminologist Gary Kleck at Florida State University estimates that it’s as high as 2.5 million DGUs per year.  On the lower end of the spectrum, the National Crime Victimization Survey (NCVS) puts that number at about 100,000 DGUs per year.

The point is simply that without knowing this key variable to the equation how can anyone argue that one is more likely to be shot or injured by his/her own weapon than they are to use that firearm in a self-defense situation?   What number of annual DGU are pro-gun control advocates factoring in to make this claim?

The 2013 Assault Weapons Ban is the brainchild of Sen. Dianne Feinstein (D-CA).  The purpose of the law, which bans all sorts of modern sporting rifles and standard capacity magazines that hold more than 10 rounds, is to “save lives.”

“This is something I’m deeply passionate about, and I believe it saves lives,” Feinstein has said regarding her AWB. “I don’t intend to stop.”

Well, as numerous government departments have pointed out in the past (Centers for Disease Control, National Review Council, the Department of Justice and the National Institute of Justice) the Clinton-Era AWB had a negligible effect on crime rates.

More recently, the Deputy Director of the National Institute of Justice, Greg Ridgeway wrote the following with respect to ‘assault weapons’ in his internal DOJ memo, “Summary of Select Firearm Violence Prevention Strategies” that was accidentally leaked to the public.

Put quite simply, unless there’s outright confiscation via a government “buyback” program (aka federal agents going door-to-door to round up everyone’s guns), an AWB will do nothing to reduce gun-related violence – and even then, there’s no guarantee.

Every major pitch for gun control is shrouded with words like “reasonable” and “common sense” and false assurances like, “We don’t want to take your guns” or “We strongly support the Second Amendment.”

Seriously?  Do gun-control proponents really believe this?  Then I ask them to please explain the following quotes:

“What we need to do is change the way in which people think about guns, especially young people, and make it something that’s not cool, that it’s not acceptable, it’s not hip to carry a gun anymore, in the way in which we’ve changed our attitudes about cigarettes.” – Attorney General Eric Holder at the Women’s National Democratic Club, Jan. 30, 1995.

Also, please explain the half-dozen or so confiscatory gun laws that have been introduced in the past few months.  Here’s some language from a Missouri/Minnesota Bill.  If this AWB passes, law-abiding gun owners would be faced with the following options.

(1) Remove the assault weapon or large capacity magazine from the state of Missouri;

5. Unlawful manufacture, import, possession, purchase, sale, or transfer of an assault weapon or a large capacity magazine is a class C felony.

If you ask me, that’s a strange way to prove to gun owners that they’re not really trying to take our lawfully owned firearms.