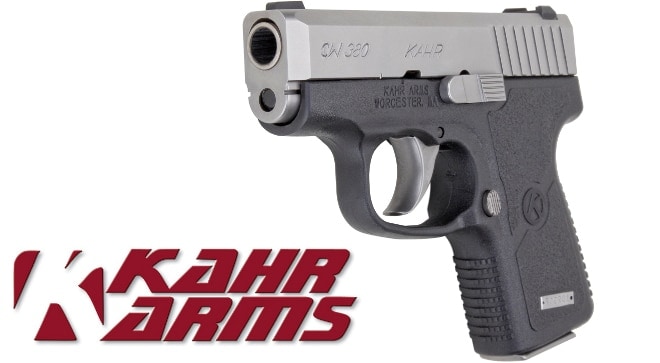 At SHOT Show this year Kahr announced another addition to their CW series of low-cost “micro-compact” pistols, the CW380. The CW380 is based on the P380, one of Kahr’s most popular designs, but with several changes to make it more affordable.

This polymer-and-steel striker-fired subcompact .380 ACP handgun is intended for the concealed-carry market, and has a smooth and snag-free design, including small, but visible and usable sights.

Unlike Kahr’s flagship models, the CW380 has a handful of cosmetic as well as functional changes, including a simpler slide design that requires less machining.  The slide is also engraved, as opposed to Kahr’s other guns which are roll-marked.  The slide stop/takedown lever is metal-injection-molded, not machined.

The sights are made of polymer, not metal and are pinned in place, two more cost-cutting measures. The biggest difference is the barrel; instead of the standard match-grade polygonal rifling used in most Kahr handguns, the CW380 is equipped with a standard-fit traditionally-rifled barrel.

Finally, it ships with just one flush-fitting magazine, as opposed to two, but you save about $200 over the P380, which leaves you with plenty for extra mags (which generally run in the $40-50 range). The CW380 uses the same magazines as the P380.

Internally the CW380 functions identically to its higher-priced predecessor, inheriting Kahr’s reputation for reliability and durability, just at a lower price point. It also uses the same highly-acclaimed trigger, which is rated to have a 5.5-pound pull and is often a little lighter than that.

Jeff Quinn got a hold of an early sample saying, “The little Kahr is a pleasure to shoot. The trigger pull is butter-smooth, and the shape of the trigger is just right for pain-free shooting. Kahr got the trigger right. Some others do not, and the result is a sore trigger finger when shooting some of the 380 pocket guns on the market.

“Even after a long session of firing ammunition through the CW380 for function and velocity testing, the Kahr remained very comfortable to shoot,” he continued.

For a complete list of specs, check out the product page. Some details include:

The suggested retail price for the CW380 is just $419, which means real-world prices should be closer to $350. With gun prices being what they are now, it’s nice to see Kahr coming in with low-cost options. Keep your eyes peeled for this new handgun.